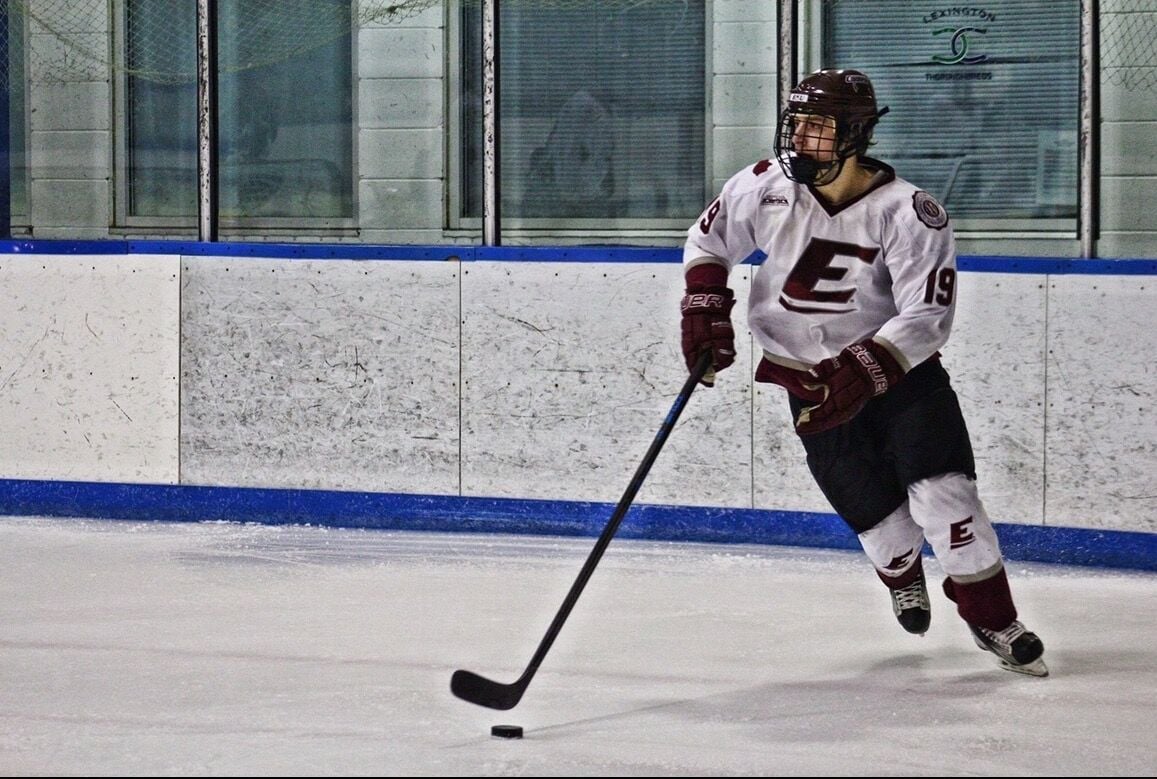 Gabe Bahn controls the puck during a game in a previous season for EKU hockey. 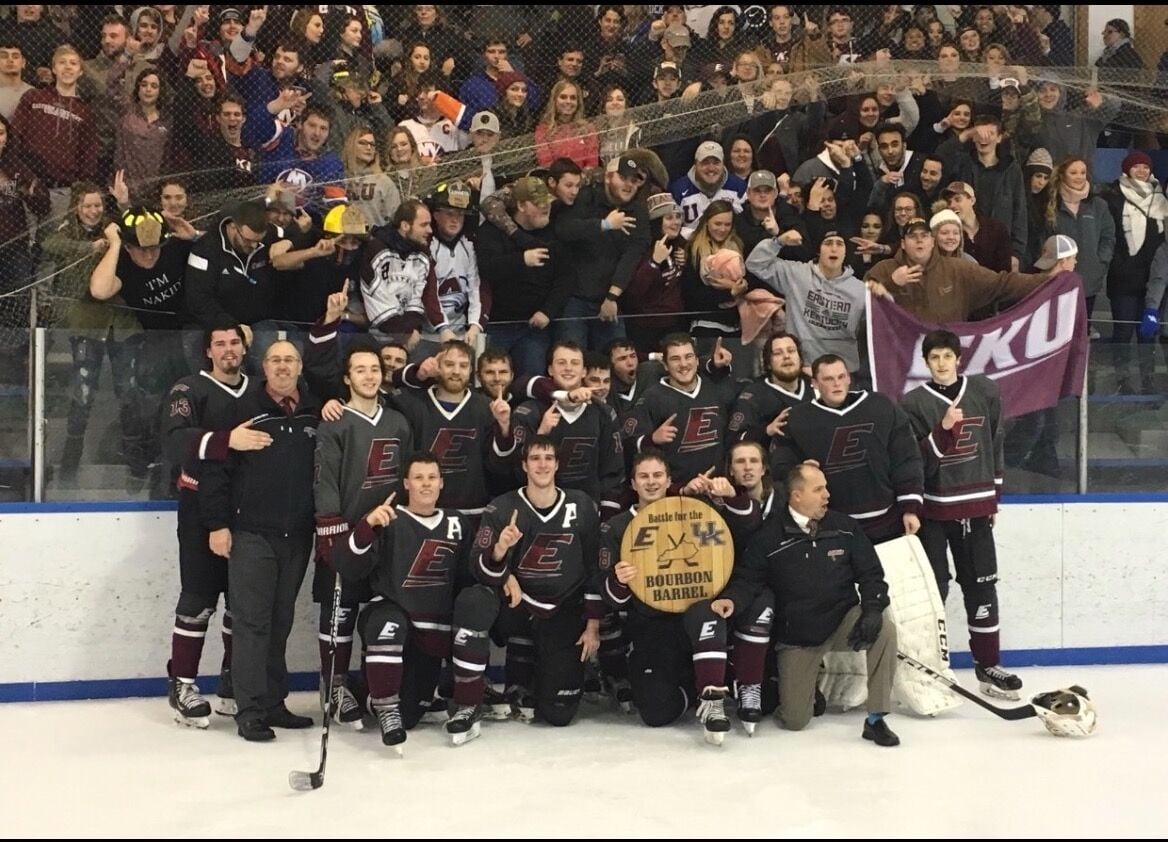 Gabe Bahn controls the puck during a game in a previous season for EKU hockey.

The COVID-19 pandemic has caused many sports to postpone or cancel their seasons over the past year, including the Eastern Kentucky University club hockey team. For Gabe Bahn, senior fire safety engineering major, it has been even more disappointing, since he won’t be able to finish his final year on the ice with his team.

“It’s definitely a let down to know that we couldn't play games either in the spring semester of last year and pretty much this whole year,” Bahn said. “We were hoping we would be able to play in the spring, but it just ended up not working out. The university didn't want us to travel because it would be a liability.”

Even though Bahn and his teammates couldn't get out on the ice to compete this year, he is keeping a positive mindset and is happy that the team is still able to practice together and build on their team chemistry.

Before the pandemic, the Colonel hockey team was steadily rebuilding their program and dominating their opponents on the ice. Bahn was a key part of the success of the hockey team ever since he arrived at EKU in 2017.

Bahn was a part of two Bourbon Barrel trophy victories after defeating in-state rival University of Kentucky in 2017 and 2018.

When Bahn joined the EKU hockey team his freshman year, all he heard about was how exciting and special the EKU vs. UK matchups were.

“Being able to get that win my freshman year [against UK] was really exciting, and to be able to do it again on the first night of the season in 2018, that Friday night when we beat them in a really close game, that was probably my favorite game. … It was great to be able to say we beat them twice,” he said.

When Bahn hit the ice, he said he would play his hardest to help his team in any way he could. For Bahn, it’s all about being a team player and finding ways to win games. Bahn has been an assistant team captain for the last few years. He said he has taken that responsibility to help his younger teammates and be a good example.

“We were definitely playing really well,” Bahn said. “We were grinding on all cylinders and playing well as a team. Definitely in the earlier years we had a little bit of a recruiting challenge, and then this current year, we got in a bunch of new guys who are really good for our team. … I’m definitely glad to see them come in right before I leave because I know they are going to take the program in the right direction and continue its success.”

The hockey team recently announced that they would be moving to the Southeastern Collegiate Hockey Conference next season. The SECHC will be in its 14th season in 2021-22. EKU hockey came off its fourth winning season in five years in 2019-20. Head coach Joel Cormier said that the move will create new and exciting rivalries with college teams representing the top Power-5 conference brands while striving to protect existing ones.

Bahn is happy to see the team move up to a bigger conference and have the opportunity to face Power-5 opponents.

“I’ve put in a lot of hard work in the last four or five years, and the people before have to see us get into a good and competitive conference. It feels like a good reward to be able to see all that hard work pay off in the end,” Bahn said.

“It was definitely a very exciting experience,” Bahn said.

Bahn and EKU hockey player Timothy Muhsman were selected to represent the team. They were able to travel to Philadelphia, Pa., to showcase their skills. The best players from around the conference were selected to be on the all star team.

Bahn has played for Cormier since he arrived on campus his freshman year and said Cormier has pushed him to be the best player he can be and that he has enjoyed learning from him.

“He’s always got our backs and always believes in us,” Bahn said. “He’s always encouraging and never negative towards us. He always thinks about the positive things. He spends a lot of time with us and doing things for us, and that’s something he volunteers to do. He doesn't get paid anything for it. It’s just something he loves to do, and he’s passionate about it, and he really cares about us.”

Cormier said he will remember Bahn as always being a fun person to be around off the ice and a true competitor on the ice.

“With Gabe, obviously everyone will probably talk about how he was a good player, but for me, Gabe was a sense of humor,” Cormier said. “He keeps things loose and relaxed. On the ice, he was so intense.”

Cormier said that even though Bahn was not able to have a normal senior season, he has not let that bother him, and he has still been able to stay positive for the younger players on the team.

Cormier said Bahn set the tone in games, and the team will miss his intensity.

Bahn got involved with hockey from an early age and played throughout his time at  Hendersonville High School. He picked to attend EKU because a high school friend with whom he played hockey was attending EKU.

Over the years, Bahn has seen the fan base for EKU hockey grow, and he believes it will continue to grow even more.

As Bahn finishes off his final semester of senior year, he said he will always remember the great times he had with his teammates while getting to represent EKU on the ice.