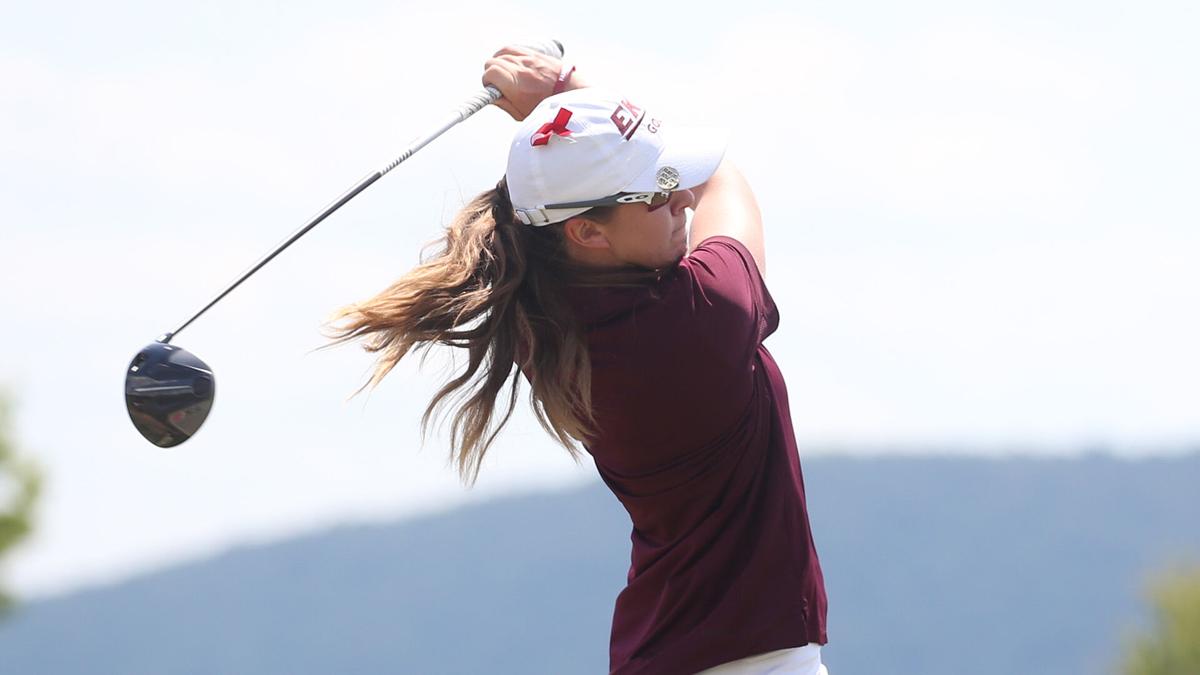 Ragnhildur Kristinsdottir tees off at the Ohio Valley Conference Championship in April in Alabama. Kristinsdottir is a graduate student from Iceland. She has been a part of the women's golf team since 2017. 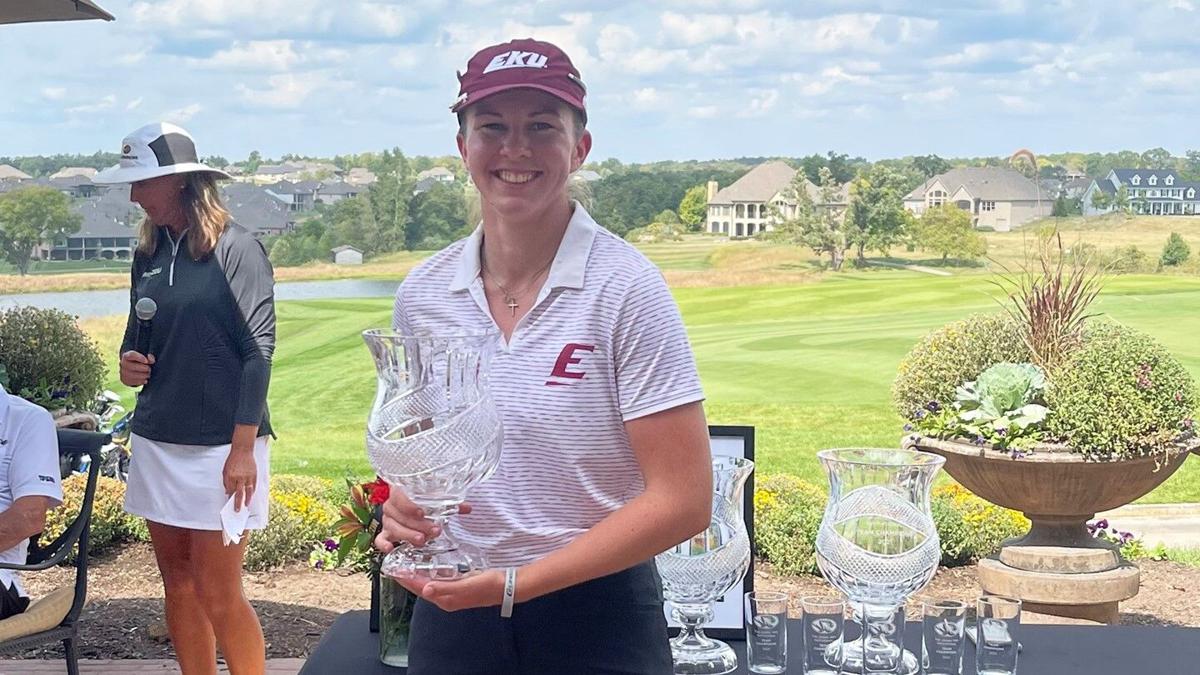 Ragnhildur Kristinsdottir breaks the program record for the 54-hole total at the Johnie Imes Invitational on Sept. 29 in Missouri. Kristinsdottir made the journey from Iceland to play golf for the Colonels. 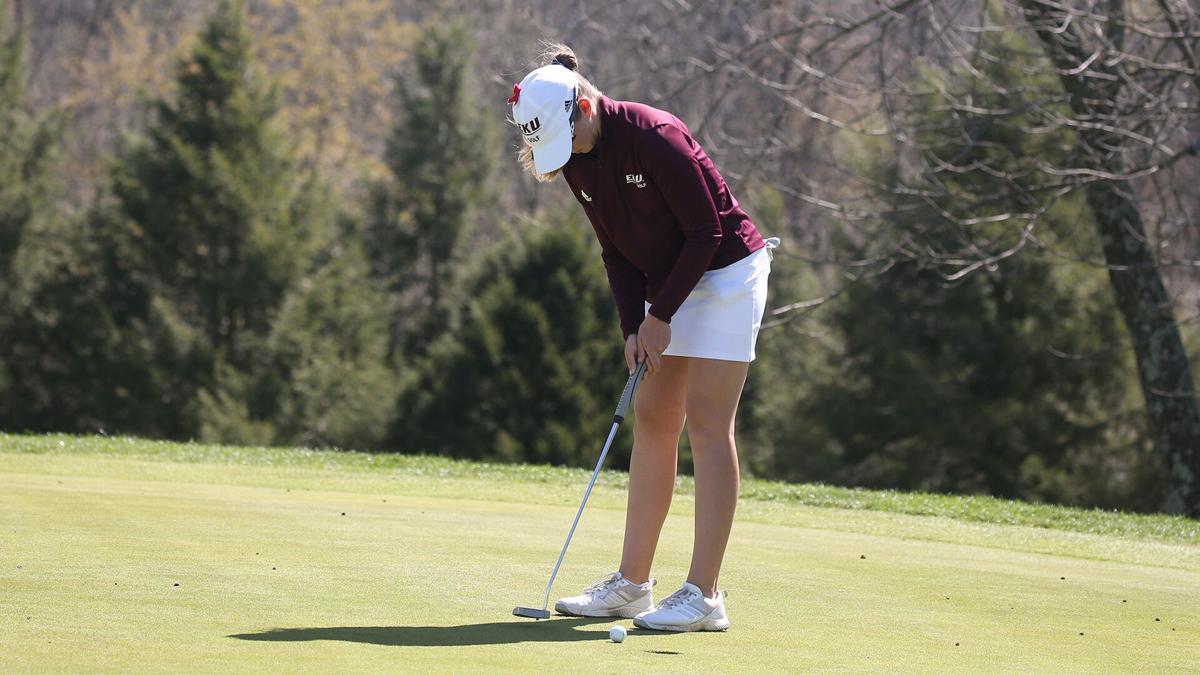 Ragnhildur Kristinsdottir putts during the fall 2021 season Colonel Classic tournament at the University Club at Arlington. Kristinsdottir is one of the four international golfers on the women's team.

Ragnhildur Kristinsdottir tees off at the Ohio Valley Conference Championship in April in Alabama. Kristinsdottir is a graduate student from Iceland. She has been a part of the women's golf team since 2017.

Ragnhildur Kristinsdottir breaks the program record for the 54-hole total at the Johnie Imes Invitational on Sept. 29 in Missouri. Kristinsdottir made the journey from Iceland to play golf for the Colonels.

Ragnhildur Kristinsdottir putts during the fall 2021 season Colonel Classic tournament at the University Club at Arlington. Kristinsdottir is one of the four international golfers on the women's team.

Ragnhildur Kristinsdottir’s two older brothers started playing golf when they were younger, and she was always jealous watching them travel and practice.

“I ended up getting my first set of clubs when I was six and went to a summer clinic,” Kristinsdottir said. “I’ve been hooked on it ever since.”

Kristinsdottir searched for potential schools in the United States that she would like to attend. She said she sent out a dozen emails and heard back from former Eastern Kentucky University women’s golf head coach Mike Whitson.

“I heard back from Mike Whitson and started talking to him,” Kristinsdottir said. “I signed about a week after my first email to him.”

Kristinsdottir came from Iceland to the United States in 2017 to further her golf career at EKU.

“Back home in Iceland, we don’t really do college sports so having the opportunity to get a college degree and play the sport that I love was the main focus point for me,” Kristinsdottir said.

Kristinsdottir said it was difficult coming from Iceland to Kentucky because of the culture change. She said the minor gestures took a lot of getting used to but after her freshman fall semester, she felt more comfortable in Kentucky and said it grew on her.

“It was extremely different,” Kristinsdottir said. “My best example is going to open a door at home and you don’t really keep it open for the next person behind you but here if you do that, you’re not a really nice person, so that took a hot minute to get used to.”

Kristinsdottir said when she first came to EKU, she struggled with missing her friends and family back home.

“I struggled with some sickness my freshman fall semester,” Kristinsdottir said.

She said she had to make friends and adapt to those changes slowly.

“I kind of leaned on my teammates and tried to hang out a little bit more with them and not really get that alone time because if you do then you’re going to think more about what you could be doing at home,” Kristinsdottir said. “I spent more time with my teammates and went to dinners at their place. I went with my suitemates for Thanksgiving and all that kind of stuff.”

Kristinsdottir also said the terrain and golf courses were different in Kentucky compared to Iceland where they are more open.

“To be honest, I like the golf over here in the states more than back home because it fits my game a little bit more,” Kristinsdottir said. “The weather is a little bit nicer here than at home. The average in the summer is about 55 and winter is about 32 so it really doesn’t get that extreme but I would prefer that it would maybe get into the low 70’s at some point. It really doesn’t happen and it’s usually pretty windy.”

She said she was the only freshman on the team her first year and had to play with more experienced girls. She only played in a few tournaments but said that her freshman winter break she improved herself and got better.

“It’s been a journey, we’ll put it at that,” Kristinsdottir said. “These past two years, I’ve seen a lot of improvement in my game and the team and overall surroundings of the golf program. It’s been so fun to see.”

Kristinsdottir is a graduate student in her fifth year with the team. She said she has built so many friendships and relationships with her teammates and coaches.

“It’s been such a blessing, I’ve made some of my best friends over here and I mean you would not think that someone from Iceland would be good friends with someone from Manchester, Kentucky,” Kristinsdottir said. “It doesn’t really make sense but then again it’s some of my best friends. I’m so fortunate and feel so blessed to meet all the people I have met over here.”

EKU women’s golf head coach Mandy Moore said that she has been able to watch first hand the relationships between the team form and grow over time.

“One of the neat parts about having a diverse group on a team is that they get to learn different cultures and different things about each other,” Moore said. “It kind of makes it fun, we’ve had girls in the past from different parts of the world become best friends. It’s kind of neat to watch those relationships grow.”

Moore said she has a lot of respect for international players who commit to play at EKU so far from home.

Moore said, “It’s such a totally different environment for them but it’s fun as a coach just to get to know them and try to help them as much as I can and you know everybody is so different. The challenge as a coach is just figuring out what makes each of them tick and how to get the most out of them.”

Kristinsdottir broke the program record for the 54-hole total, shooting a 204 in the Johnie Imes Invitational in Missouri on Sept. 29. Moore said it was rewarding as a coach to watch Kristinsdottir improve over the years.

“Ragga (Kristinsdottir) is a special player and she has been here the longest of anybody on our team and she’s in her fifth year here,” Moore said. “She’s just worked really hard and has improved her game over the years and has dropped her scoring average by almost three shots in only two or three years. It’s very rewarding for her and for me to be able to see her hard work pay off and she’s worked for all of it and I’m happy to see her doing well.”

Kristinsdottir said her goals and plans for the future are to continue building her golf career but on a bigger level.

“Plan A is to go to qualifying school for the LPGA next fall, we’ll see where that takes me,” Kristinsdottir said. “If I get fortunate enough to get in that will be awesome but if not, we’ll see what plan B ends up being.”

Kristinsdottir said she hopes to leave some mark at EKU when she graduates.

“We have a saying at home that people come and go but your reputation never dies, so that’s one of the things that I’m trying to build in my last year here,” Kristinsdottir said. “Eastern is always going to have a place in my heart and I hope that I’ll have a place in Eastern’s heart.”