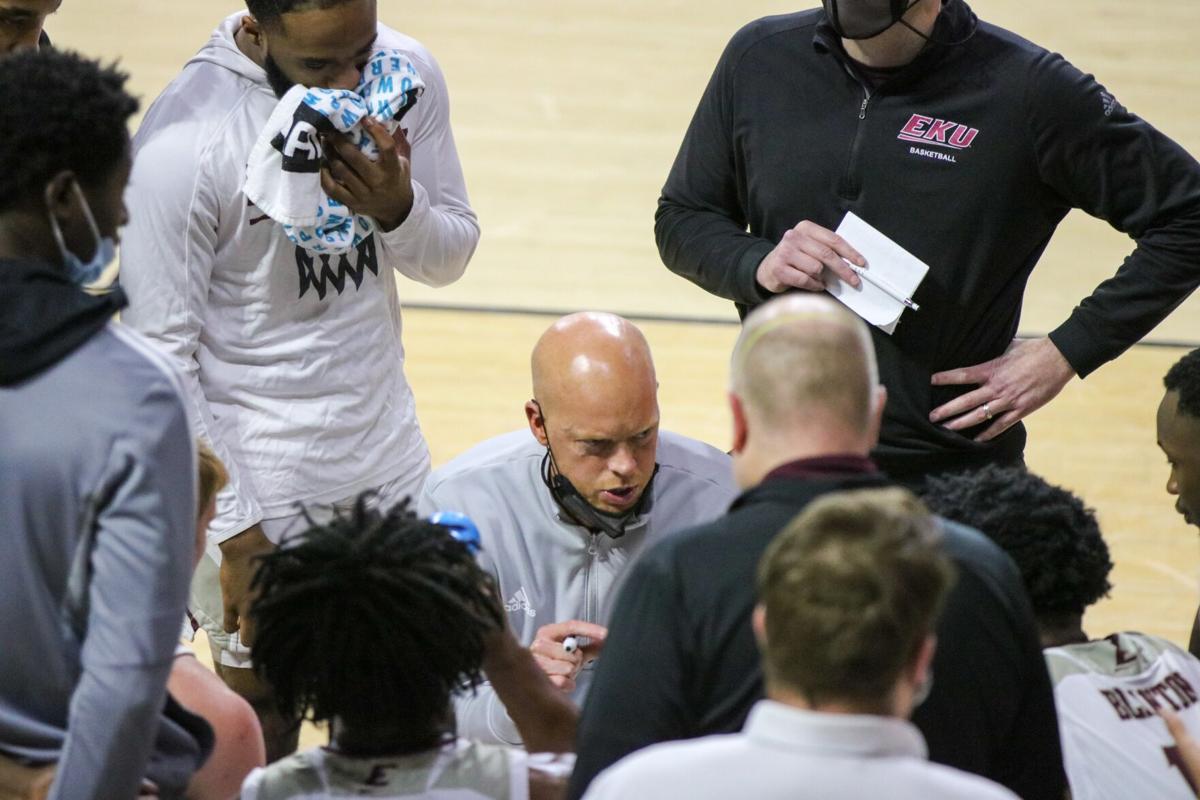 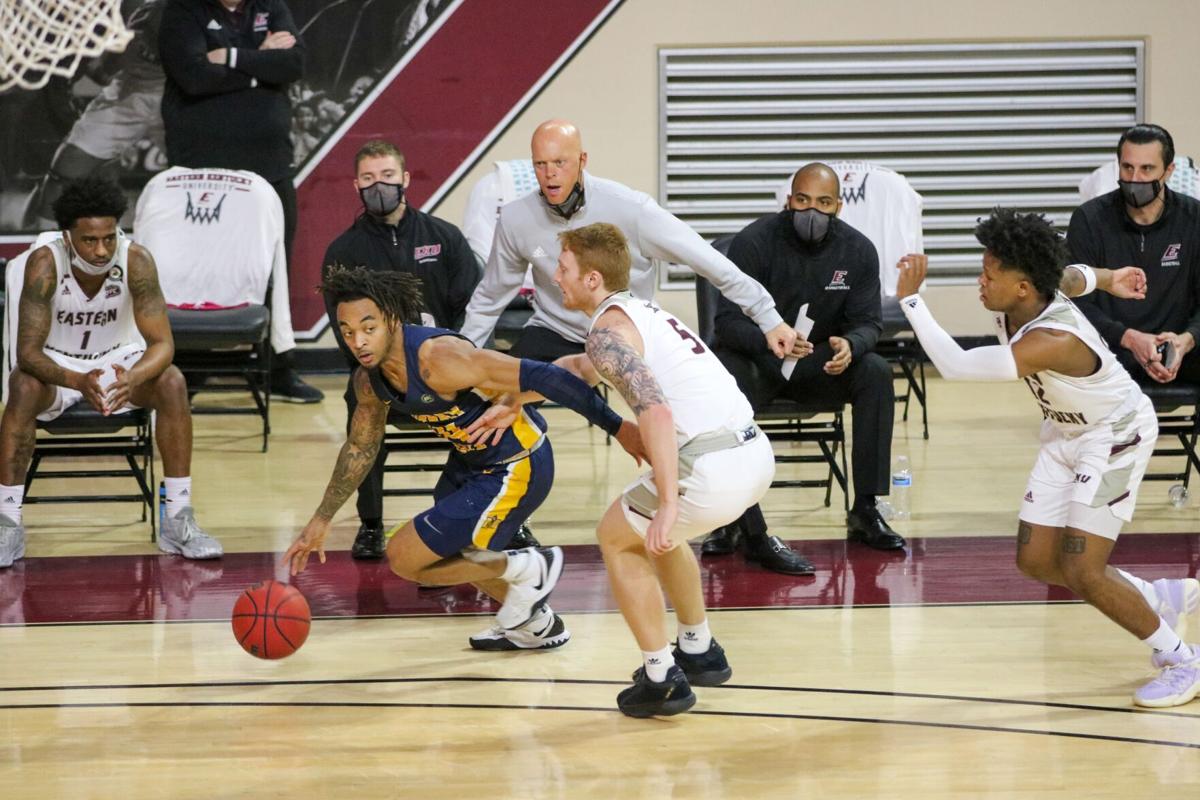 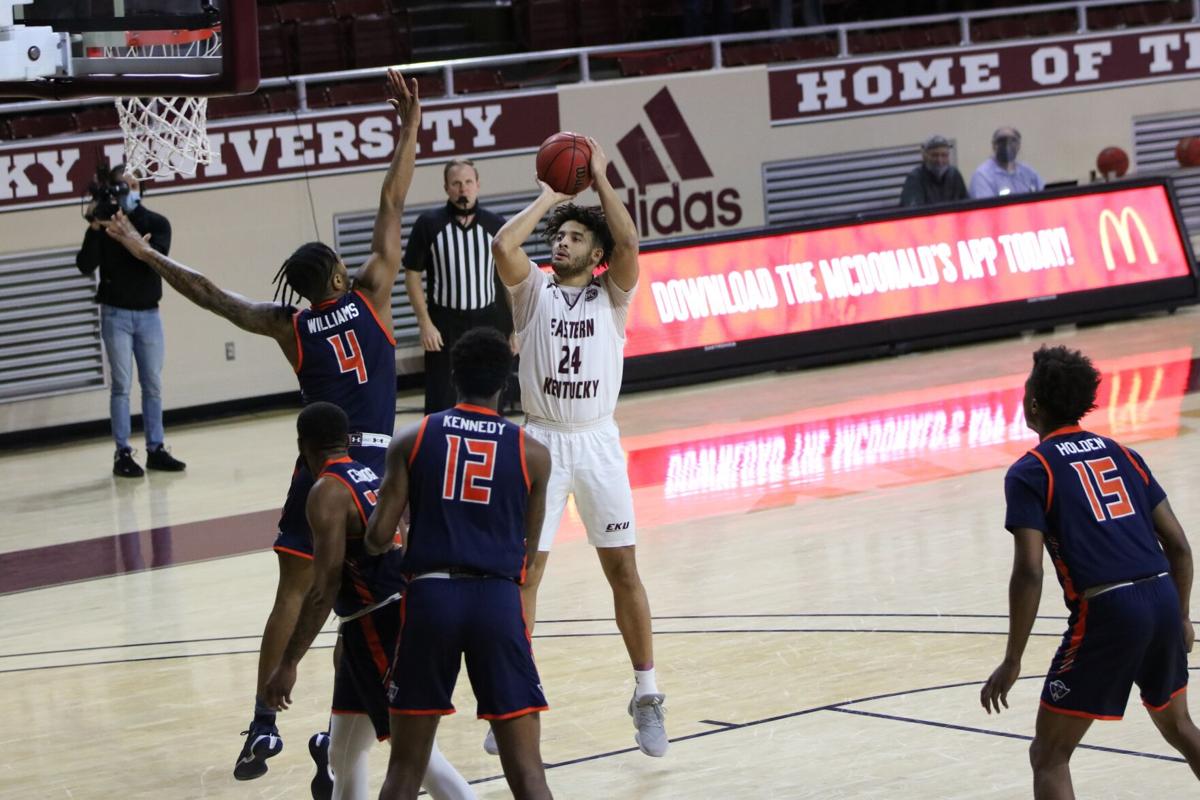 Though the journey to Eastern Kentucky University looked different for men’s basketball coach A.W. Hamilton, junior guard Cooper Robb and sophomore forward Michael Moreno, the start of each of their journeys were the same. Growing up in Georgetown, KY, Hamilton, Robb and Moreno all passed through Scott County High School and left their marks on its basketball program.

For Hamilton, playing for Scott County was the dream. In his four years there, Hamilton helped lead the Cardinals to a state championship in 1998 and a second place finish in 1999. He was inducted into the Scott County Hall of Fame in 2015.

When Moreno and Robb began their high school careers about twenty years later, the expectation was set to win a championship. However, neither Robb nor Moreno could bring the championship back to Georgetown, despite both players making the state finals in 2018 and Moreno again in 2019.

The hometown connection between Hamilton, Robb, and Moreno allowed them to create a special bond. For Moreno, knowing Hamilton’s roots made their relationship unique.

“A lot of times, coming up, you want to play for somebody who’s kind of had an experience kind of like yours or has kind of been through some of the same stuff you’ve been through. There’s no better example than coach Hamilton in regards to him playing for the same high school coach, growing up in the same town. So I feel like it’s very unique, the connection we have there,” said Moreno.

Moreno was a highly-decorated high school athlete, being a three-time first-team all-state selection and a 2019 Kentucky Mr. Basketball finalist. In making his college decision, he knew whether he came to EKU or played elsewhere, Hamilton would not lead him astray.

“I don’t think he would want to steer me in any direction that he wouldn’t go in, just because he knows me at a more personal scale than most coaches would’ve, at least at face value,” Moreno said.

Robb’s relationship with Hamilton did not begin until he decided to come to EKU. Robb mentioned the first time he met Hamilton was at Roosters in Georgetown after he committed to EKU. Despite the late start to their relationship, Robb found it easy to relate to Hamilton because of their shared high school experiences.

“We can all relate to the same things in the sense of everything is a day-to-day effort, and you’ve got to come in every day and work with the same work ethic that you did the day before, and you can’t take a day off. Coach [Hamilton] preaches on that now, and Coach Hicks preached on that back when I was in high school. So, it’s definitely interesting to see how we can all relate to something so well,” Robb said.

Former longtime Scott County coach Billy Hicks coached Hamilton, Moreno and Robb. The relationship between Hicks and Hamilton has proven itself to be invaluable. If needed, Hicks is there to talk Hamilton through things to get Moreno or Robb going.

Hamilton modeled his style of play, pressing for 40 minutes, after Hicks’ “32 minutes of red heat” method. Hamilton also incorporated other aspects of Hicks’ coaching style into his own style.

“Coach [Hicks] was really good at player development. That was probably one of the things that he may not have gotten enough credit for,” Hamilton said. “You think about Coach’s teams, how hard they play, and they pressed, and they played fast, and they were exciting, and Coach would wear that big red jacket on the sidelines, and that was the image you always saw of Coach. But behind the scenes, Coach was the best at player development.”

Moreno and Robb caught Hicks at the end of his coaching career, but his principles remained the same. Both players noted similarities in playing for Hamilton and Hicks as well.

“Coach Hamilton and Coach Hicks are a little similar in the sense that they’re really into the game,” said Moreno. “If they need to get in our face to light a fire under us, they’ll do it, but they’re also there to pick us up and be our biggest supporters.”

Robb said, “They come in every day with their passion and fuel it onto other people.”

Prior to playing together at EKU, Robb and Moreno spent three years together at Scott County. After spending a few years apart, the chemistry between both players is still as strong, if not stronger, than before.

“Being apart for a little bit allowed us to kind of grow our games individually, so when we came back together, all that shared chemistry we had built in high school was really easy to pick back up on,” Moreno said.

Hamilton, Robb, and Moreno had the same lesson instilled in them during their time at Scott County: play with maximum effort each game, and even if shots aren’t falling, the team will come out on top if they play how they know to play and leave it all on the floor.

For all three men, the experiences they’ve shared have made their relationship one unlike most college players and coaches.

“I’m so proud of what they accomplished at Scott County High School,” said Hamilton. “I love both of those guys, and I’m really proud of both of them.”