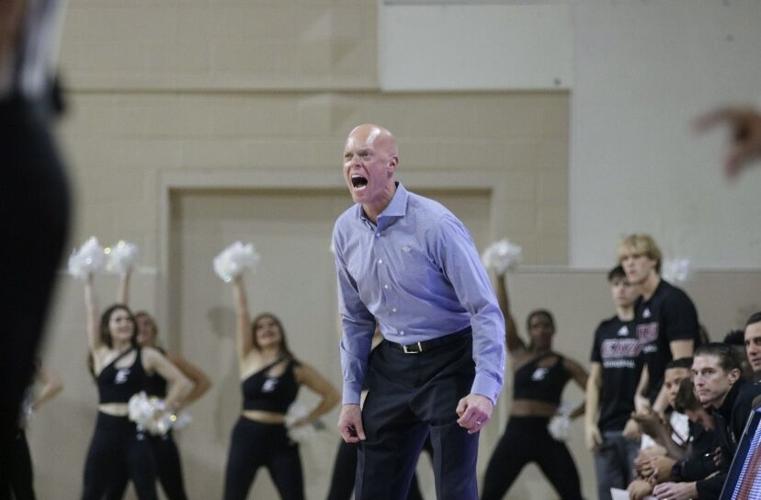 EKU head coach A.W. Hamilton coaches the Colonels from the sideline during the first half against Brescia on Nov. 23 at Baptist Health Arena. 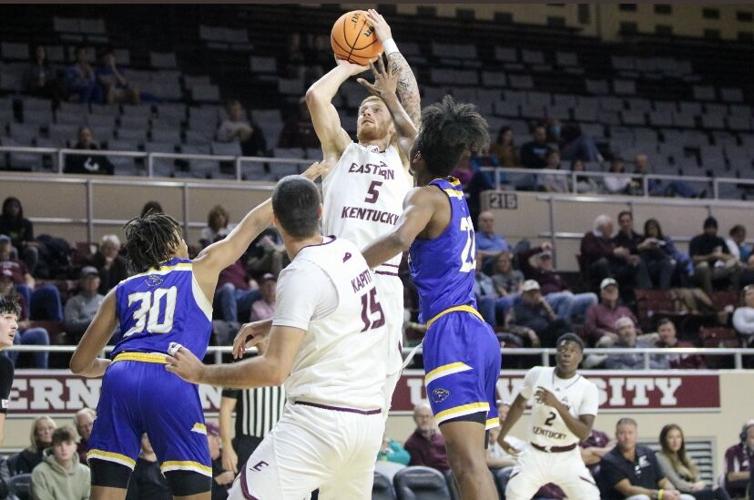 Senior Cooper Robb makes a shot during the second half against Brescia on Nov. 23. Robb finished the night with 11 points, three assists and two steals.

EKU head coach A.W. Hamilton coaches the Colonels from the sideline during the first half against Brescia on Nov. 23 at Baptist Health Arena.

Senior Cooper Robb makes a shot during the second half against Brescia on Nov. 23. Robb finished the night with 11 points, three assists and two steals.

Junior forward Michael Moreno started scoring for the Colonels with a 3-point shot before senior guard Cooper Robb recorded a steal to regain possession for EKU.

Freshman guard Tayshawn Comer also recorded a steal shortly after before making a layup and heading to the line for a free throw.

The Colonels scored 12 points before the Bearcats drew a foul from senior forward Isaiah Cozart to score two free throws.

EKU then went on a 13-8 run before the media timeout with junior forward Dardan Kapiti at the line to shoot two. The Colonels led, 27-9, after the free throws.

At the 10 minute mark, EKU took a timeout to regroup, with Brescia slowly closing the gap, 31-15.

Brescia continued to scrap, recording three defensive rebounds and one steal between the nine and seven minute mark.

At the six minute mark, junior guard Devontae Blanton muscled through Brescia defenders, drawing a foul and heading to the line. Blanton made both free throws, keeping the Colonels’ lead 44-26.

Assisted by Blanton, Kapiti slammed down EKU’s 50th point of the game with four minutes left  in the first half.

Senior forward Michael Wardy made a huge block just short of halftime, finishing the half in the lead, 61-31.

The Colonels started the second half with two big possessions. Robb missed his 3-point shot, but Blanton secured the rebound and put it back up for two.

Cozart blocked a Brescia shot and Moreno grabbed the rebound before pushing back up the floor to Cozart for a huge slam.

EKU stayed hot with Robb and Blanton making back-to-back-to-back threes to extend the EKU lead, 74-37, with 16 minutes left in the second half.

With 11 minutes left in the game, Brescia guard Carrieun Mathis drew a technical foul, sending Blanton to the line where he went 1-1.

With seven minutes on the clock, the Colonels scored their 100th point of the night when freshman Leland Walker made a three, extending the EKU lead, 102-65.

EKU finished the final four minutes with a 15-6 run, beating the Bearcats, 122-84, at Baptist Health Arena.

The Colonels will resume play on Dec. 2 at James Madison University with tipoff set for 7 p.m. ET. The game will be televised on ESPN+ and aired on WCYO 100.7 FM.