You have permission to edit this article.
Edit
Welcome, Guest
Home
News
Sports
Opinion
Features
Visuals
Podcasts
About
1 of 5 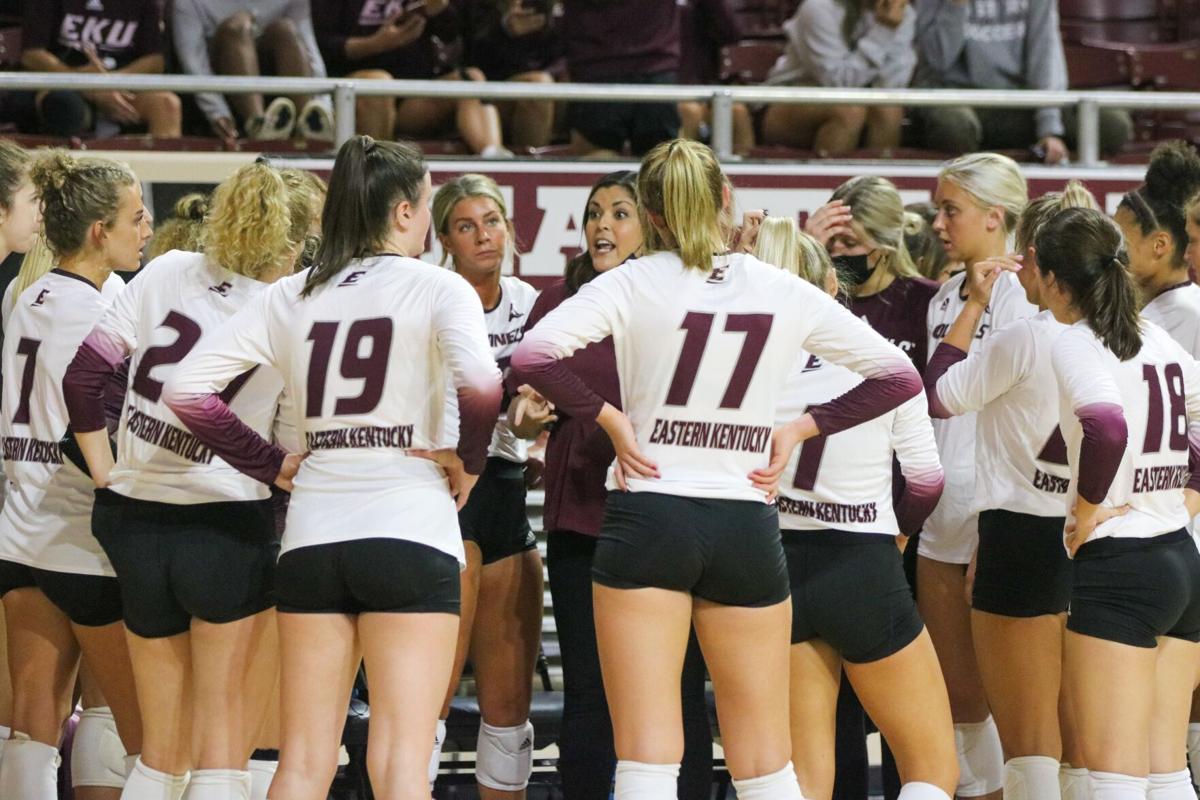 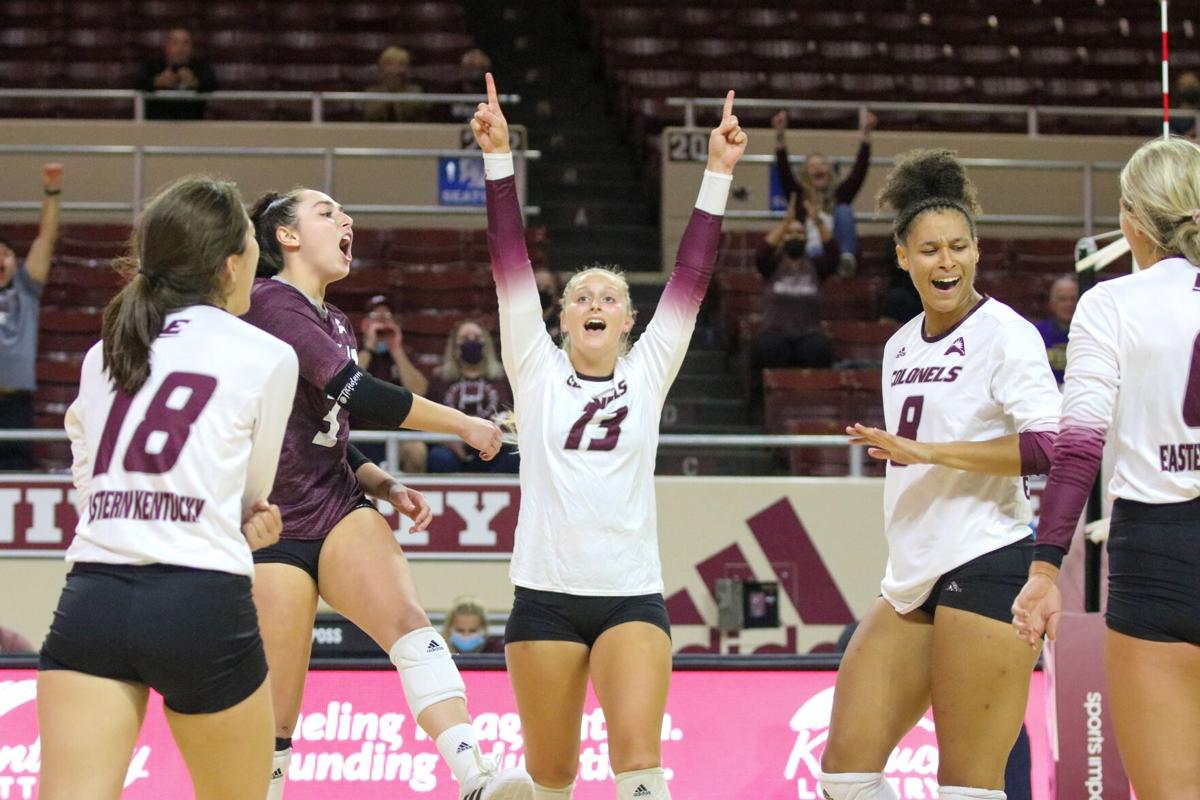 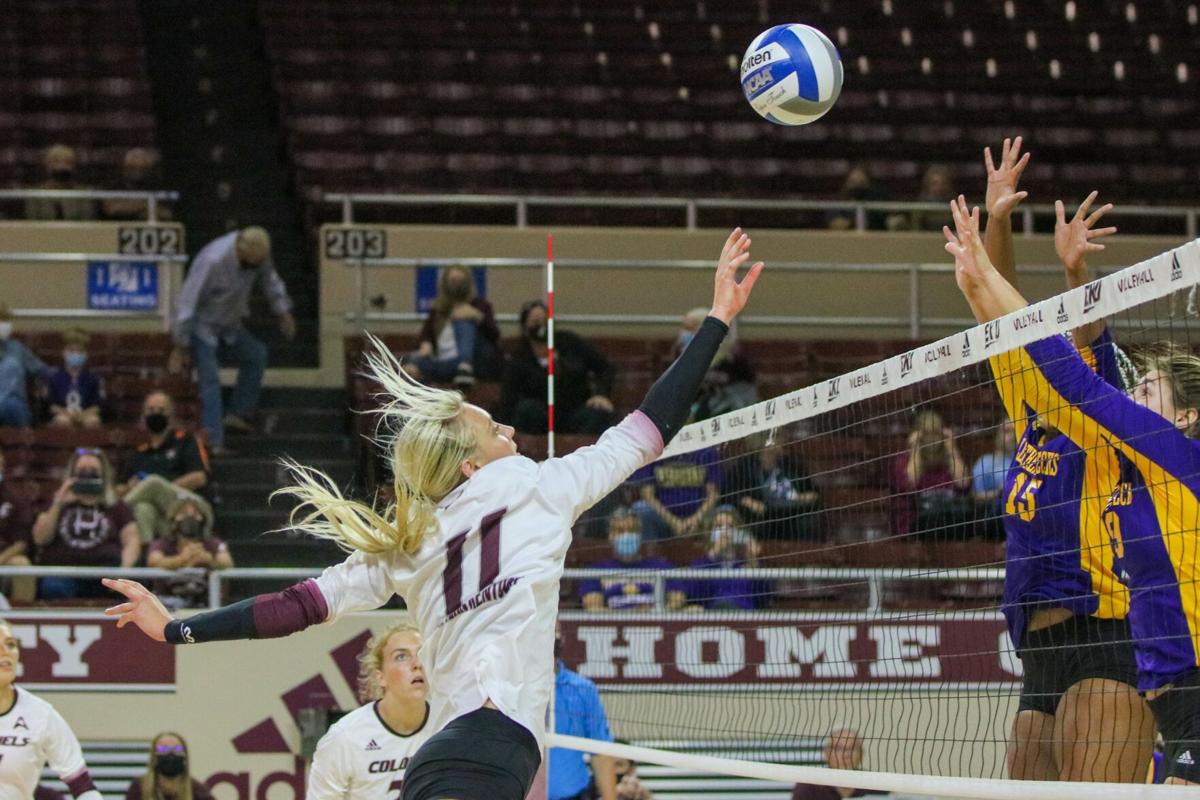 Eastern Kentucky University outside hitter Molly Michalak goes up for a hit on Friday, Sept. 10 against Western Illinois. 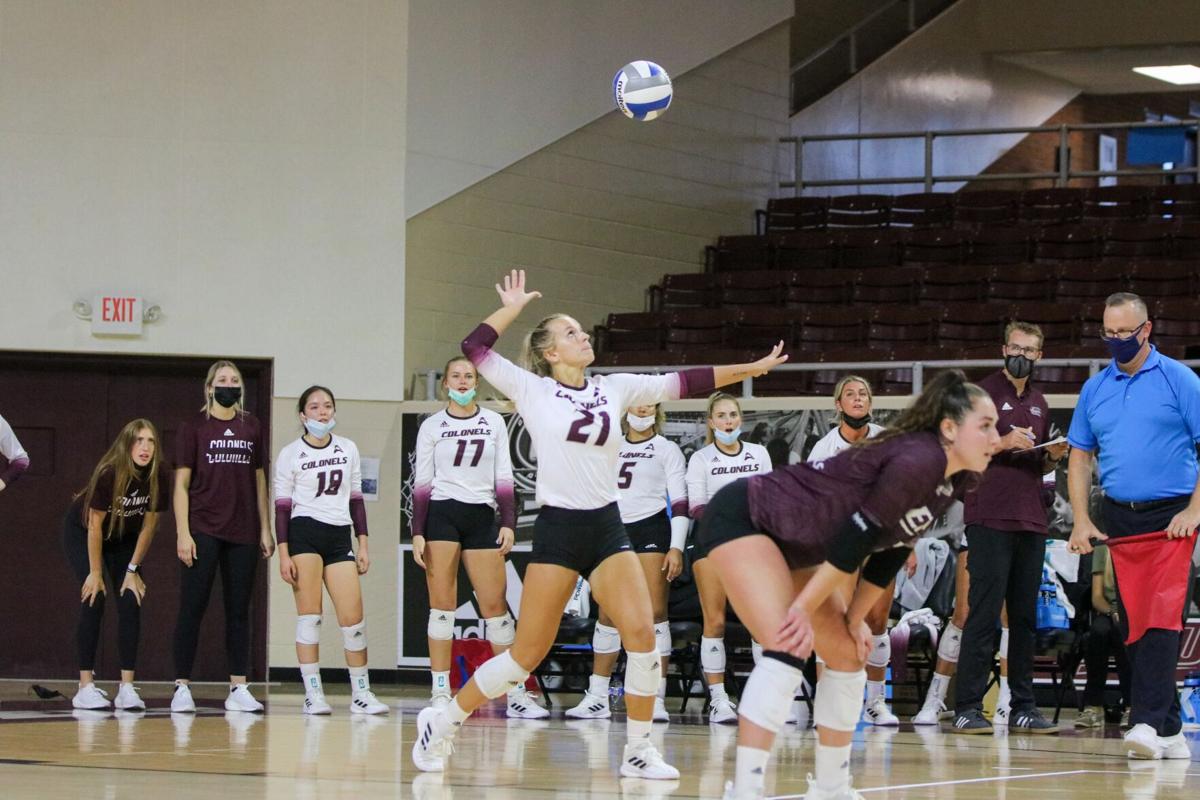 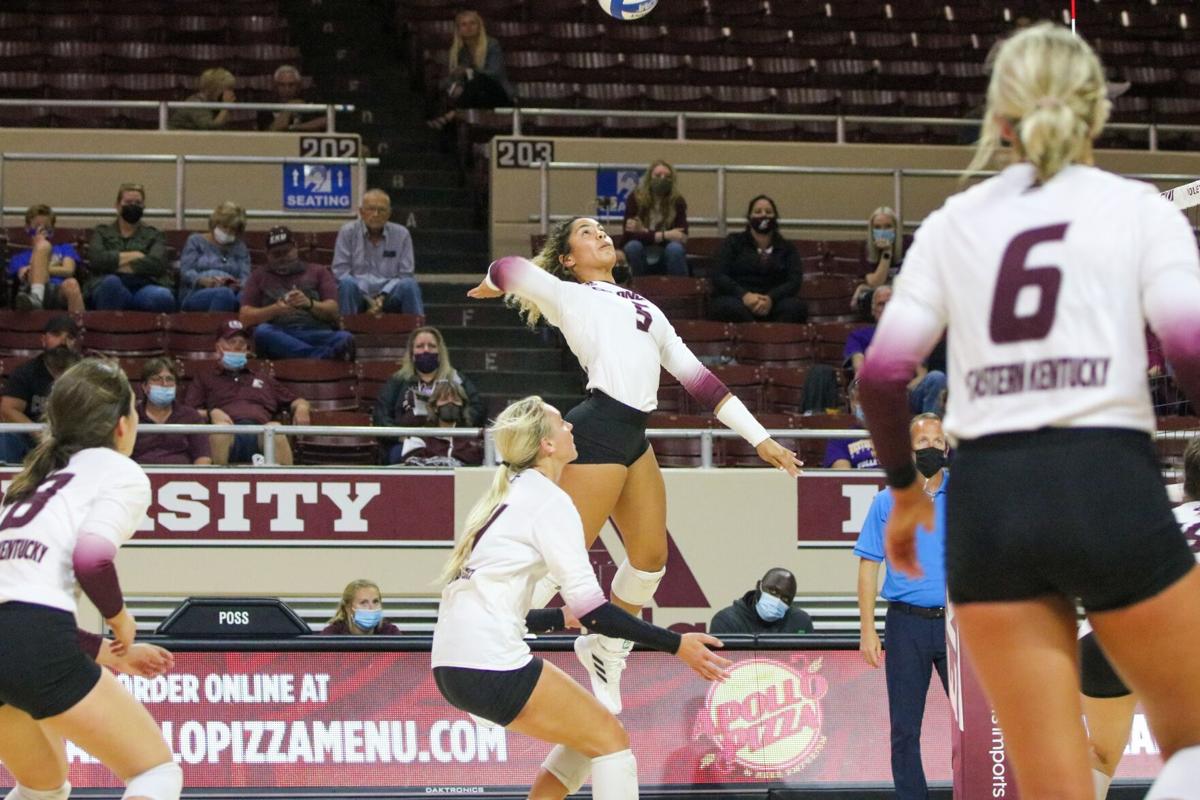 Eastern Kentucky University outside hitter Kali Walker goes up for a hit on Friday, Sept. 10 against Western Illinois.

Eastern Kentucky University outside hitter Molly Michalak goes up for a hit on Friday, Sept. 10 against Western Illinois.

Eastern Kentucky University outside hitter Kali Walker goes up for a hit on Friday, Sept. 10 against Western Illinois.

The Colonels dropped the first two sets before staging a comeback. EKU kicked off a five-point run in the third set with a kill from freshman middle blocker Megan Duffy. Western Illinois never got within three points the rest of the set, and EKU claimed the third set, 25-21, on a kill by Michalak.

The fourth set was a back-and-forth battle. EKU trailed 10-13 before going on a 5-1 run to retake the lead. EKU and Western Illinois traded points from that point forward, before two consecutive kills from Michalak ended the set in favor of the Colonels, 27-25.

Michalak finished the game with a team-high 22 kills. Schoen tallied 26 digs and Carmichael dished out 36 assists.

Head coach Johnna Bazzani said the loss was tough but applauded the fearless attitude of several younger players who stepped in after the first two sets.

“We definitely fought. It’s hard to fight back being down 0-2 and taking it to a fifth set. Unfortunately, it wasn’t good enough for the win,” Bazzani said. “I think we’ve had some young kids who haven’t played before stepped in tonight and picked up the slack for some of our leadership that kind of came out very tense in the first two sets. So, that was good to see as a coach, just some new kids coming in, and giving it all they got, playing with a fearless attitude, but unfortunately what we gave tonight wasn’t good enough.”

One player in particular, freshman outside hitter Kali Walker, stepped in and made an immediate impact. She finished with 10 kills.

“She came in huge for us in that third match. I think she plays with a fearless attitude and she did exactly what we asked her to do,” Bazzani said.

Michalak said she had complete confidence in the younger players who stepped in throughout the game.

“That’s so hard to do, come off the bench cold, and be expected to make an impact. So the fact that they were able to come in right away and literally execute on the ball, like that in itself speaks so much about them and their urge and willingness to come in and do something and make a change,” said Michalak.

After going down 0-2, Michalak saw the third and fourth sets as an opportunity to turn the game around. She said the urge and willingness to win from the team helped fuel the almost successful comeback.

“I think the vibe (from the team) was if we believe in ourselves, we can do it, and we did that third and fourth set. I think we gave it our all but obviously we came up short, but I think what really got us through those sets was like the urge and the will and the wanting to win,” said Michalak.

Western Carolina captured the first set, 25-20 and started the second set with a 7-2 lead. Freshman outside hitter Anna Purichia and senior middle blocker Mikayla Logan combined for a huge block to put EKU up 13-12. The Colonels never looked back and capped off the set on an emphatic kill by Mitchell to tie the match 1-1.

The third set started with a Western Carolina point, but EKU responded with three straight points and never trailed for the remainder of the set. A slide kill from Logan put EKU up 12-9, and an ace from freshman setter Taylor Grinley extended the lead to 16-9. Western Carolina pulled within three, but EKU held on to win the third set, 25-20.

The Colonels controlled the fourth set. An ace from Grinley and two quick kills from Logan gave EKU a 3-1 start. EKU extended its lead to six, 13-7, after a kill from Logan and an error from Western Carolina. Western Carolina chipped away at the lead before EKU went on another 5-0 run, capped off by an all-out defensive play by Mitchell to set up a kill for sophomore outside hitter Katie McKune. A kill from Michalak gave EKU the set, 25-16, and the match, 3-1.

Three Colonels finished with double-digit kills. Michalak led with 16, Mitchell followed with 15 and Logan had 10 kills. Grinley ended with 29 assists, and Schoen paced the defense with 22 digs.

After the two losses on Friday, Bazzani hoped to see more consistent volleyball from the team against Western Carolina, which she said she did.

“It was a good team effort. I think we utilized a lot of people this weekend and today we really played consistent volleyball and that’s who I know we can be. It’s just continuing to build off today and keep that momentum going throughout the rest of the weeks,” Bazzani said.

“I think we definitely targeted them on our serves a lot. We kept them out-of-system, which was huge,” Bazzani said. “We’ve got aggressive servers out there, and even our passing, we struggled a little bit here and there in glimpses, but we definitely made adjustments and were able to stay consistent with our game which kept us in system to run an offense.”

Mitchell said the team knew what the loss in five felt like against Western Illinois and did not want to have that feeling again. She said the win was a complete team effort.

“Everyone plays a role, including people on the bench, people on the court, and everyone coming together to get this win today and that is exactly what happened,” Mitchell said.

After starting the season on the road, Bazzani said it felt good to be back in front of the home crowd.

“It’s good to be home. It’s always good to have home games. The crowd really does help us get our momentum going and it’s just good to not have to be on the road,” Bazzani said.

EKU volleyball is back in action on Wednesday, Sept. 15 at Butler University at 6 p.m.