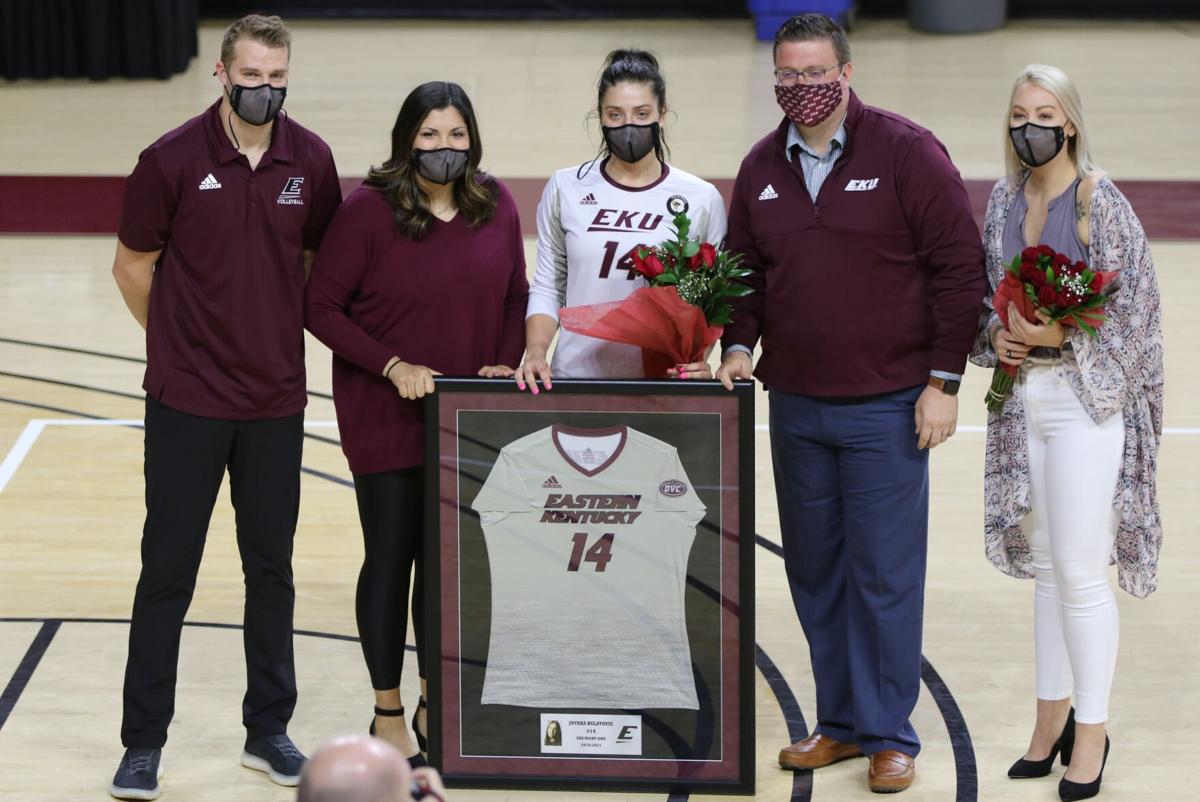 Eastern Kentucky University volleyball recognized Jovana Bulatovic during senior night at McBrayer Arena on March 21 before the game against Morehead State. Bulatovic has been on the team since 2019, after her transfer from Western Illinois. 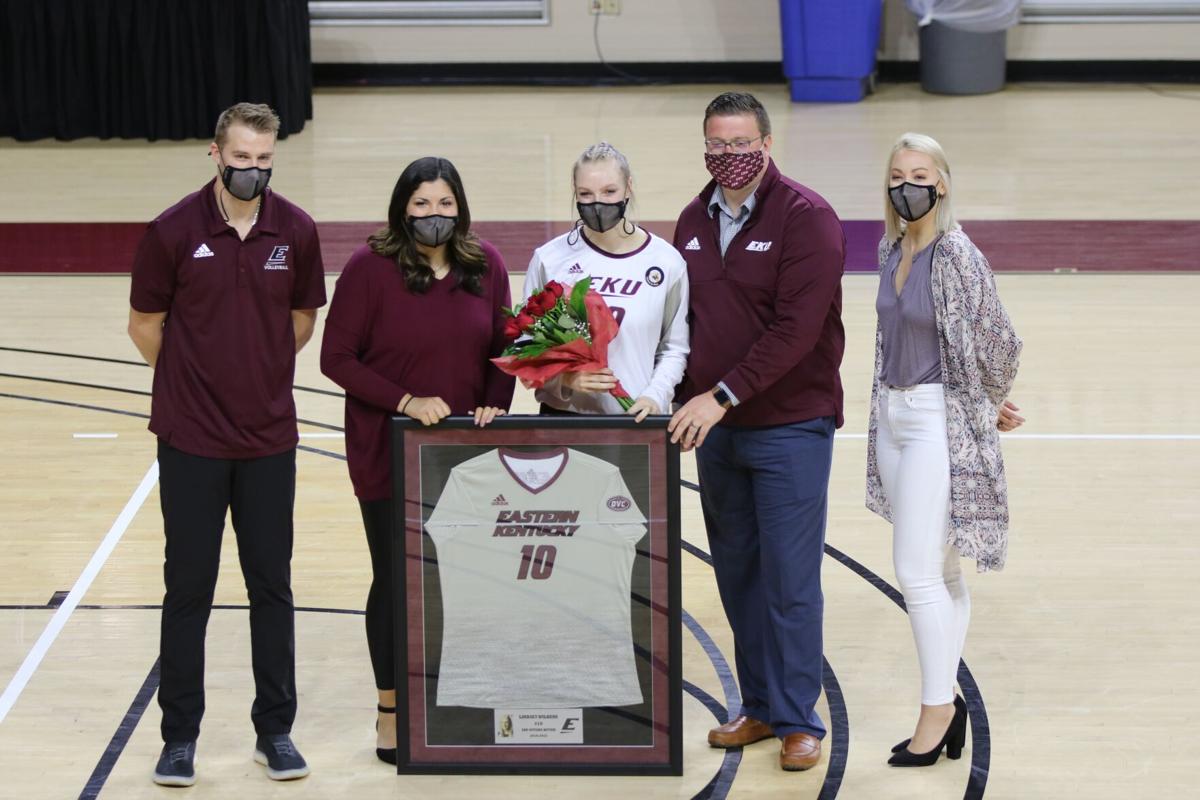 Eastern Kentucky University volleyball recognized Lindsey Wilkins during senior night at McBrayer Arena on March 21 before the game against Morehead State. Wilkins has been on the team since 2018, after her transfer from Indiana State. 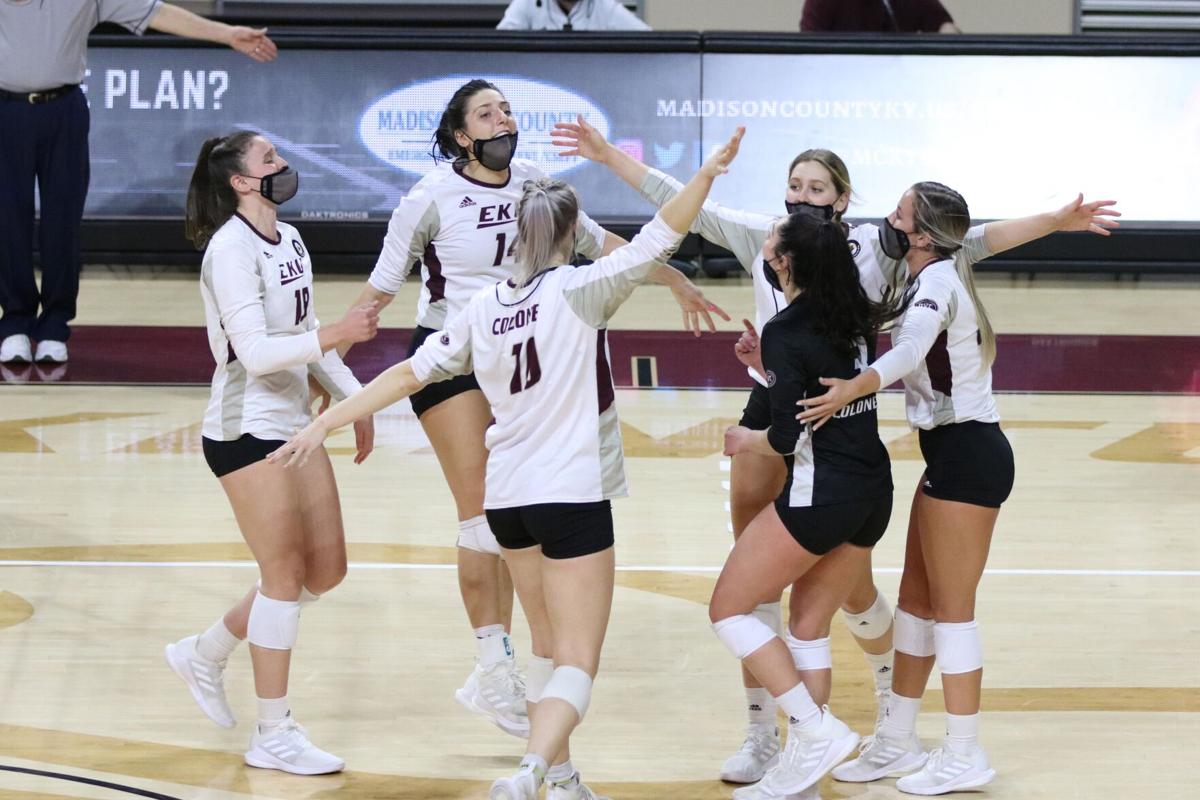 Eastern Kentucky University volleyball players celebrate after a point against Morehead State on March 21 at McBrayer Arena. The Colonels are back in action for their final home game at 6 p.m. Monday night.

Eastern Kentucky University volleyball recognized Jovana Bulatovic during senior night at McBrayer Arena on March 21 before the game against Morehead State. Bulatovic has been on the team since 2019, after her transfer from Western Illinois.

Eastern Kentucky University volleyball recognized Lindsey Wilkins during senior night at McBrayer Arena on March 21 before the game against Morehead State. Wilkins has been on the team since 2018, after her transfer from Indiana State.

Eastern Kentucky University volleyball players celebrate after a point against Morehead State on March 21 at McBrayer Arena. The Colonels are back in action for their final home game at 6 p.m. Monday night.

The Colonels lost in four sets, 3-1, to the Eagles. Freshman outside hitter Molly Michalak had a team-high 12 kills. Junior libero Sydney Schoen led with 22 digs and setter Audrey Eurton had 35 assists to lead EKU.

Morehead State won set one, 25-22. The set was a back-and-forth battle, with 11 ties and four lead changes. One of the most notable plays of the day occurred early in set one. Jovana Bulatovic dug a ball with her foot early in a rally that ended with a kill by Lindsey Wilkins.

After the Eagles made a few adjustments in set three, EKU head coach Johnna Bazzani saw EKU struggle to adjust to the changes.

“It kind of threw us off a little bit and I think with being so young and being so new to the game and identifying where people are is what kind of hurt us there,” Bazzani said.

The Eagles began set four with a 6-1 lead. EKU could not overcome the early lead and Morehead State came out on top in set four, 25-15.

With a few injuries in the past couple weeks, Bazzani noted the team has hit a point in the season where tiredness and fatigue start to set in. However, she does not believe tiredness can be an excuse for the team. Instead, the team must focus mentally as they finish the season.

“You have to still play point for point so it’s just the mentality thing. I think physically we’re all there. We’re all capable but mentally we have to stay in it,” Bazzani said.

Despite the loss, EKU was able to celebrate its two seniors, Jovana Bulatovic and Lindsey Wilkins.

Wilkins began her career at Indiana State before transferring to EKU in 2018. Wilkins sat out the 2019 season with a shoulder injury. Bazzani saw how the passion Wilkins has for volleyball helped in her recovery process.

“The dedication she has and the love for the game helped speed that process up and she’s a different player than she was, especially when she came in her first year here at EKU,” Bazzani said.

In her career, Wilkins has earned 337 kills, 68 digs and 41 total blocks. She had a career-high 17 kills earlier this season in a win versus the University of Tennessee-Martin.

Bulatovic joined EKU in 2019 after transferring from Western Illinois. In her first season with the Colonels, Bulatovic ranked third on the team in kills with 181 for the year. She also finished second in blocking with 58 on the year. She posted a career-high 15 kills this season in a loss to Belmont on March 1.

“She just adds a lot of just diversity into our offense and I think she’s a good player, and she’s so strong that we’re gonna miss that next year,” Bazzani said.

For Bazzani, both Bulatovic and Wilkins have stepped into a leadership role this season to lead a team composed mostly of underclassmen.

“They definitely guide the path for our freshmen and whether it’s with how they play or with their attitudes out there on the court, our freshmen definitely look to them to kind of keep them in line,” Bazzani said.

Replacing the offense both Wilkins and Bulatovic bring will be a challenge for Bazzani next season. Yet, Bazzani knows the way each player acts on the court will translate into success off the court.

“I think just how they lead themselves and carry themselves on the court just goes to show they’re gonna be successful in whatever they do,” Bazzani said.

Bazzani noted she will miss not only the offense both players bring, but also the personalities of Bulatovic and Wilkins.

“They’re awesome people. I care about my players more as people than as players and I wish them nothing but the best,” Bazzani said.

EKU hosts Morehead State in the final home game of the season on Monday, March 22 at 6 p.m. in McBrayer Arena.