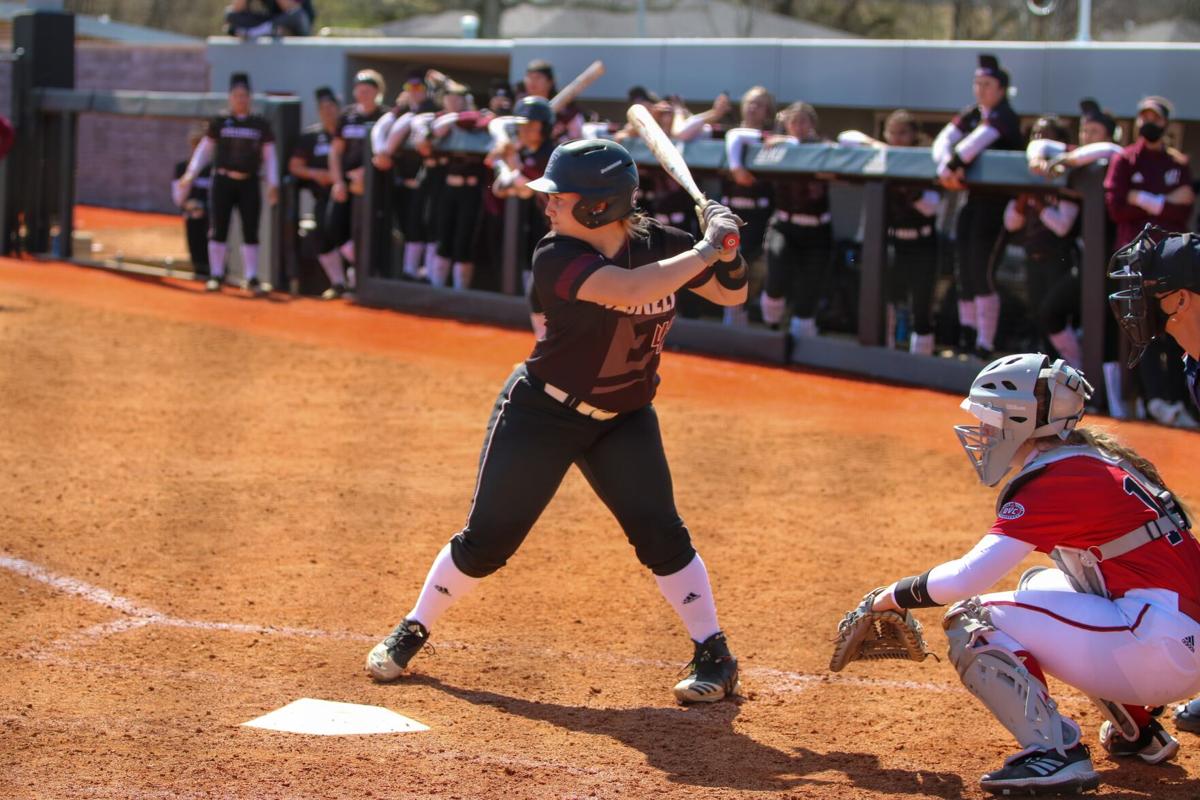 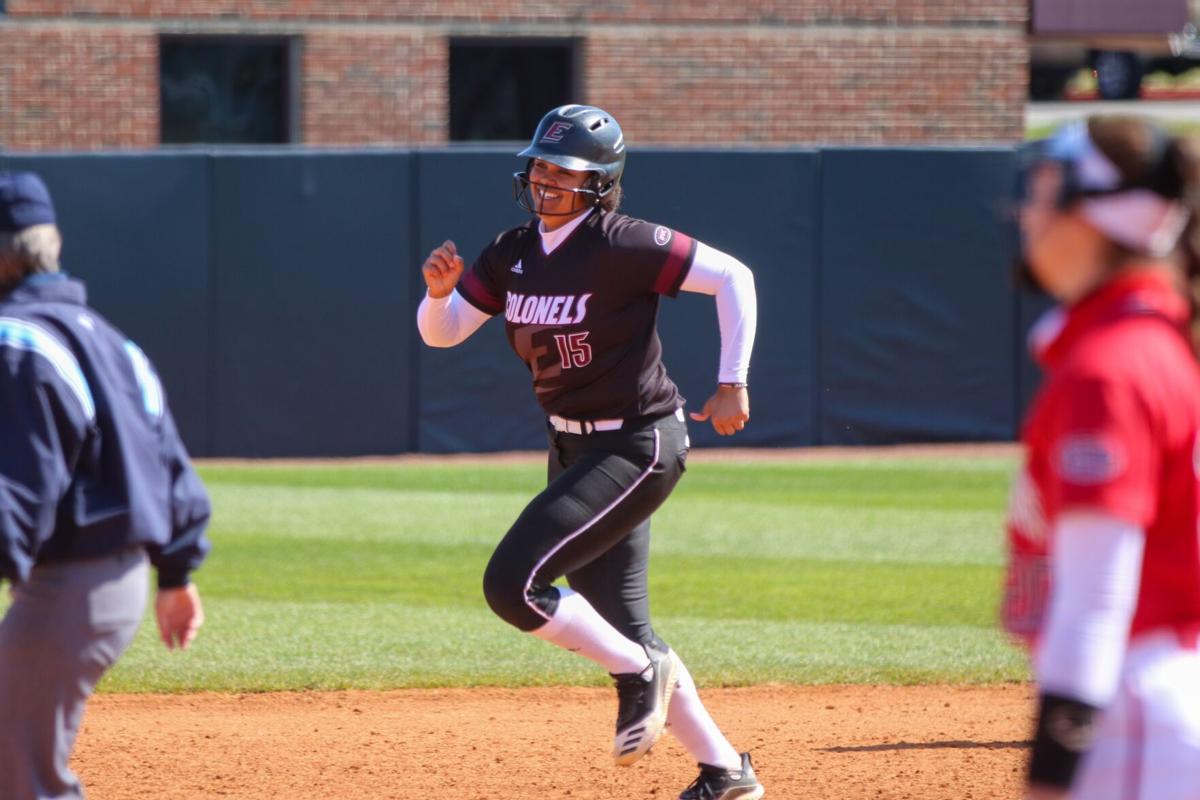 Eastern Kentucky University Carly Robinson runs around the bases after a home-run that secured a win for EKU in the first game on Saturday, March 20 against Jacksonville State at Gertrude Hood Field. After the three game series, Robinson has recorded seven home-runs this season. 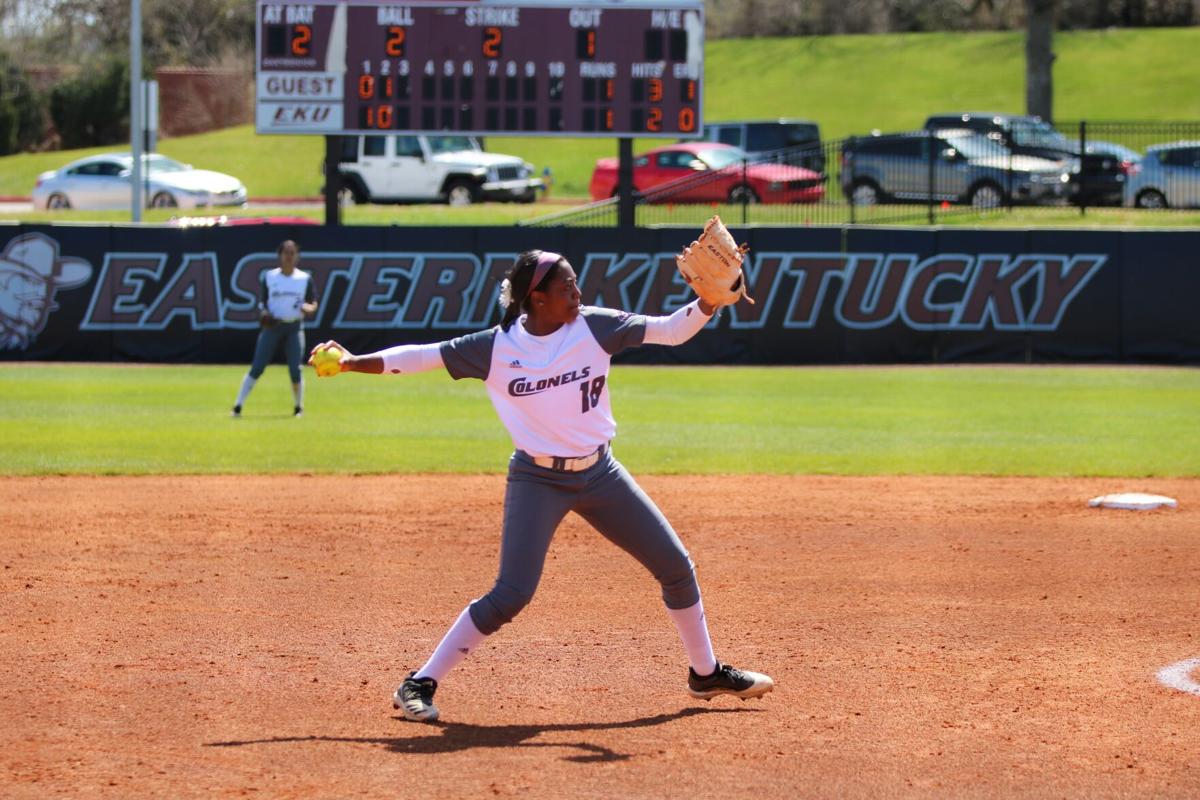 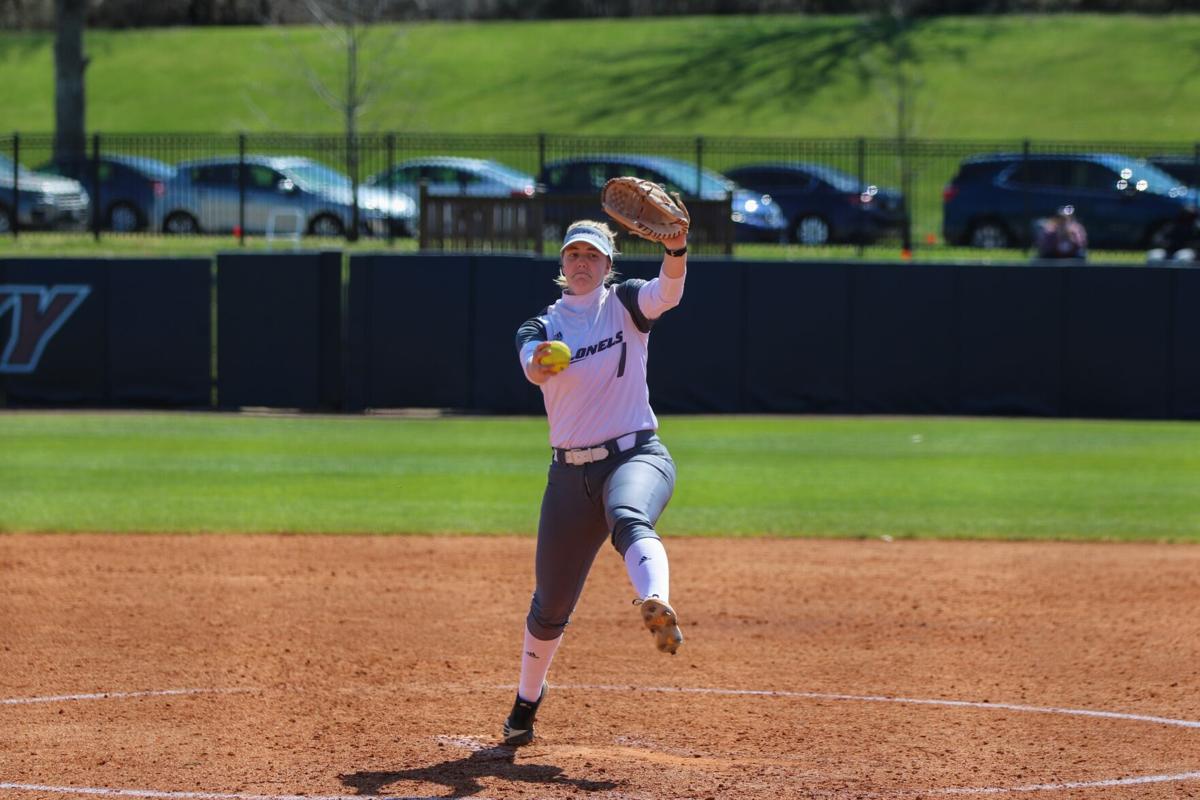 Eastern Kentucky University Carly Robinson runs around the bases after a home-run that secured a win for EKU in the first game on Saturday, March 20 against Jacksonville State at Gertrude Hood Field. After the three game series, Robinson has recorded seven home-runs this season.

The Eastern Kentucky University softball team secured the series victory against Jacksonville State after winning a pair of games on Saturday, March 20. The Colonels won game one, 6-3 and game two, 13-4. The Colonels fell in extra innings in the series finale on Sunday, March 21 by a final score of 5-4.

In game one of the series, EKU jumped out to an early 3-0 lead thanks to a bases loaded walk and sacrifice fly from Mollie Paulick that would score two. After the early turbulence, Jacksonville State starting pitcher Reagan Watkins would be near lights out only allowing five hits in eight innings of work.

The Gamecocks would strike back with a sacrifice fly of their own by Jada Terry scoring Keeli Bobbitt in the third inning. That would not be all for Terry as down by two in the fifth inning, she hit a laser single that would score both runners on base to tie the game at three.

The Colonels then substituted in pitcher Tori Peterson who minimized the damage and got EKU out of the jam. Peterson would go on to give up one hit in the next four innings to close the game.

After the two stellar pitching performances, the game was forced to extra innings. It wasn’t until the bottom of the ninth inning when EKU would get momentum going as JSU’s Watkins was relieved of her pitching duties by Lexi Androlevich after 144 pitches. With two runners on and one out, Carly Robinson smacked a home-run to right field to lift Eastern Kentucky to a 6-3 win.

This was Robinson’s fifth home-run of the season and the walk-off gave EKU their 13th win of the season. Tori Peterson picked up the win for EKU extending her perfect record to 5-0. After eight innings of hard work, Reagan Watkins ended up with the no decision. Jacksonville State fell to 4-12 on the season.

The Colonels would keep their momentum from game one of their weekend series against Jacksonville State moving with a 13-4 statement win to close out Saturday.

Once again EKU would make their mark early as they would get two runs early thanks to a bases loaded walk and wild pitch to go up 2-0. The damage would not be held off for long as Ariyana Miranda would hit a two-RBI single, followed by a Carly Robinson RBI fielder’s choice, and a Lou Bowers RBI groundout to extend the Colonels’ lead to 6-0 to crack the game open.

EKU would score in every inning they had an at bat in. The only time the game looked in question was in the third inning when Jacksonville State loaded the bases with Jada Terry up at the plate with two outs. Terry hit a flyball that was dropped that scored two to lessen the lead to 6-2.

Miranda would score her third RBI after a single in the bottom of the third and Robinson would go on to hit her second home-run of the day to extend EKU’s lead to 9-2. EKU would go on to score four more runs thanks to a Sammi Miller double and Jasmine Miller single. The Gamecocks would not stop though as Savannah Sudduth hit an RBI single and Terry would hit a solo home run. It would be too little too late as EKU would go on to win 13-4 after five innings.

The Colonels advanced to 14-6 on the season while Jacksonville State fell to 4-13. Peterson picked up another win on the season to reach 6-0 on the season. Nicole Rodriguez took the loss moving her to 2-2.

After losing the previous two games against EKU over the weekend, Jacksonville State came back to win Sunday. When down to their final out down by one run, a wild pitch propelled the Gamecocks into extra innings and eventually victory.

For the third consecutive time this weekend, EKU struck early as they scored in the first inning. That was thanks to a Robinson double off the wall that would score Miller. JSU would strike back immediately in back to back innings with home-runs. First from a Karsen Mosley solo shot then on a Jada Terry two run homer raising it to 3-1 Gamecocks.

Robinson would not be done at the plate though as in the third inning she would hit her 3rd home-run of the weekend scoring two. With the game tied at three, Kara Gunter would pinch hit and score an RBI from a sacrifice fly to push the Colonels to a 4-3 lead.

Action would not pick up again until Savannah Sudduth singled to start the top of the seventh inning. After advancing to second on a groundout and a foul out, Sudduth would steal the next two bases on wild pitches to tie the game and avoid the Gamecocks from being swept.

Jacksonville State would be the first to cash-in, as Jada Terry would hit her fifth RBI of the weekend scoring Keeli Bobbitt giving JSU the lead at 5-4.

EKU would have great scoring chances in extra innings. They would load the bases in both the eight and ninth innings. The Colonels were unable to convert as they went 0 for 4 with runners in scoring position and a strikeout to end the game.

The Colonels end up winning the weekend set with the Gamecocks 2-1, but lose Sunday 5-4 in nine innings. JSU improved their record to 5-13 while EKU fell to 14-7 on the season. Hannah Brown earned the win for Jacksonville State after six innings of work improving her pitching record to 1-1. Peterson picks up her first loss of the season making her 6-1. Peterson picked up the loss as she was responsible for the run scored on the Terry single even when she wasn’t the pitcher when it happened.

EKU starts an 11 game road stretch at Morehead State for a doubleheader this Wednesday, March 24. The Colonels next home game will be Saturday, April 10 against Tennessee State at 1 p.m.