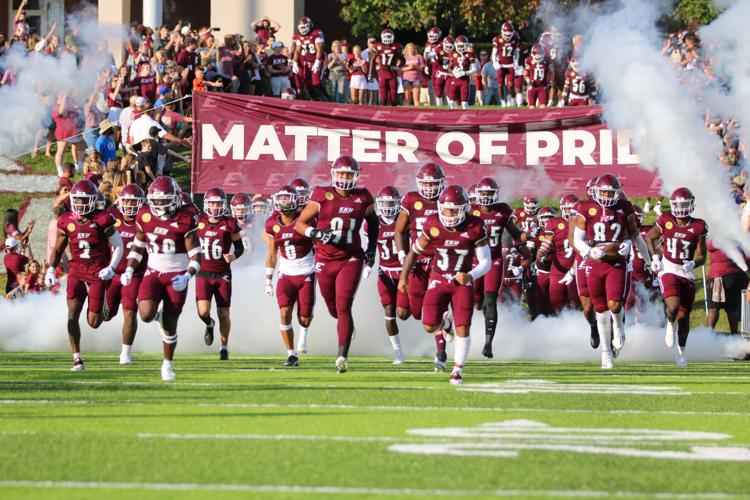 EKU's football team runs onto the field for the home opener vs. Charleston Southern at Roy Kidd field on Sept. 17. EKU won the game 40-17 with an attendance of 16,906. 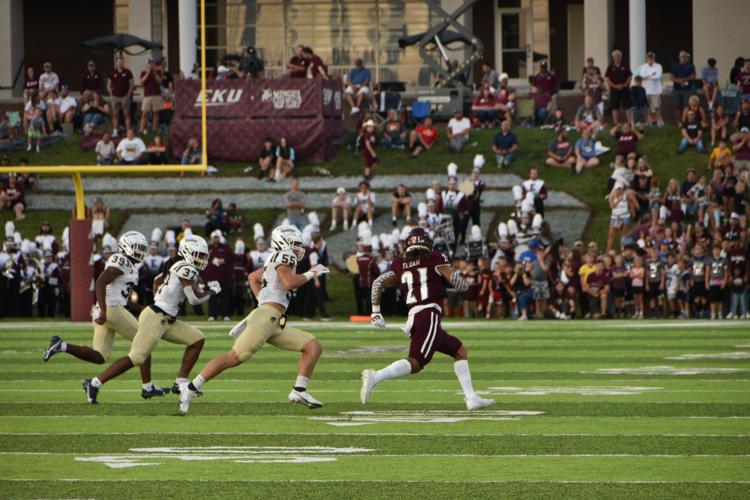 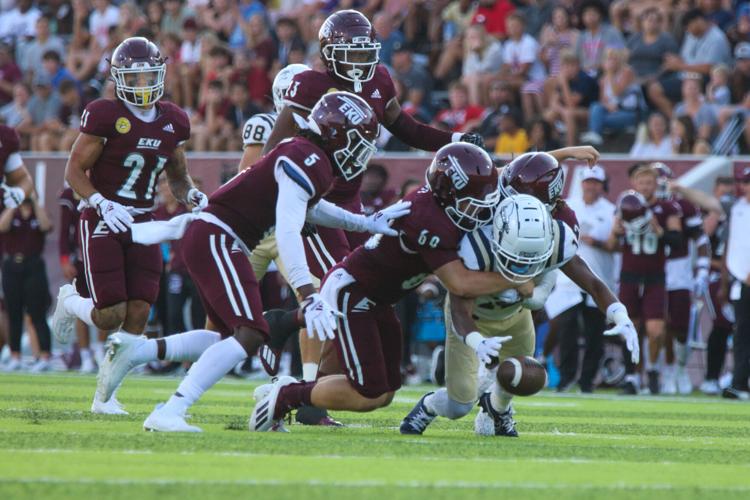 Eastern Kentucky University defenders swarm a Charleston Southern player as he recovers a CSU fumble in EKU's 40-17 win on Sept. 17

EKU's football team runs onto the field for the home opener vs. Charleston Southern at Roy Kidd field on Sept. 17. EKU won the game 40-17 with an attendance of 16,906.

Eastern Kentucky University defenders swarm a Charleston Southern player as he recovers a CSU fumble in EKU's 40-17 win on Sept. 17

In front of the largest crowd at Roy Kidd Stadium since 2008, the Colonels struck first with a Patrick Nations field goal to give EKU their first three points of the night.

The Colonels slumped in the second quarter, scoring none and allowing 10 points to the Buccaneers. Heading into halftime, the Colonels led 16-10.

After halftime, EKU’s defense stopped CSU, allowing no points until the final three minutes of the game.

Nations hit a 32-yard field goal to start the scoring run in the third quarter, followed by a Kyeandre Magloire 8-yard run and a Jayden Higgins catch from a 41-yard McKinney pass. Nations hit both extra points. EKU ended the third quarter in the lead, 33-10.

The first nine minutes of the fourth quarter were quiet, with both CSU and EKU defense forcing three-and-outs.

Eventually, EKU broke the silence going 81 yards on 13 plays as Jyran Mitchell grabbed a 5-yard pass from McKinney. The pass to Mitchell was McKinney’s 51st career passing touchdown, tying with TJ Pryor for the EKU career record. Nations’ kick was good to give the Colonels a bigger lead, 40-10.

CSU scored once more in the fourth quarter with just under three minutes of play left, marking the final score of the game, 40-17.

McKinney completed 20 of 29 passes for a total of 342 passing yards, four touchdowns and one interception.

Magloire led the Colonels in rushing yards with 64 total yards, carrying 17 times and scoring one touchdown.

Higgins, coming off a spectacular game against Bowling Green State the previous weekend, caught seven passes for 185 total yards, a new career high for the true sophomore. Allen followed behind with 60 yards, catching three passes; Smith with 42 yards and three catches; and Mitchell with 13 yards and two catches. All four EKU players scored one touchdown.

EKU travels to Clarksville, Tennessee next Saturday to open ASUN play against Austin Peay with a 4 p.m. kickoff.