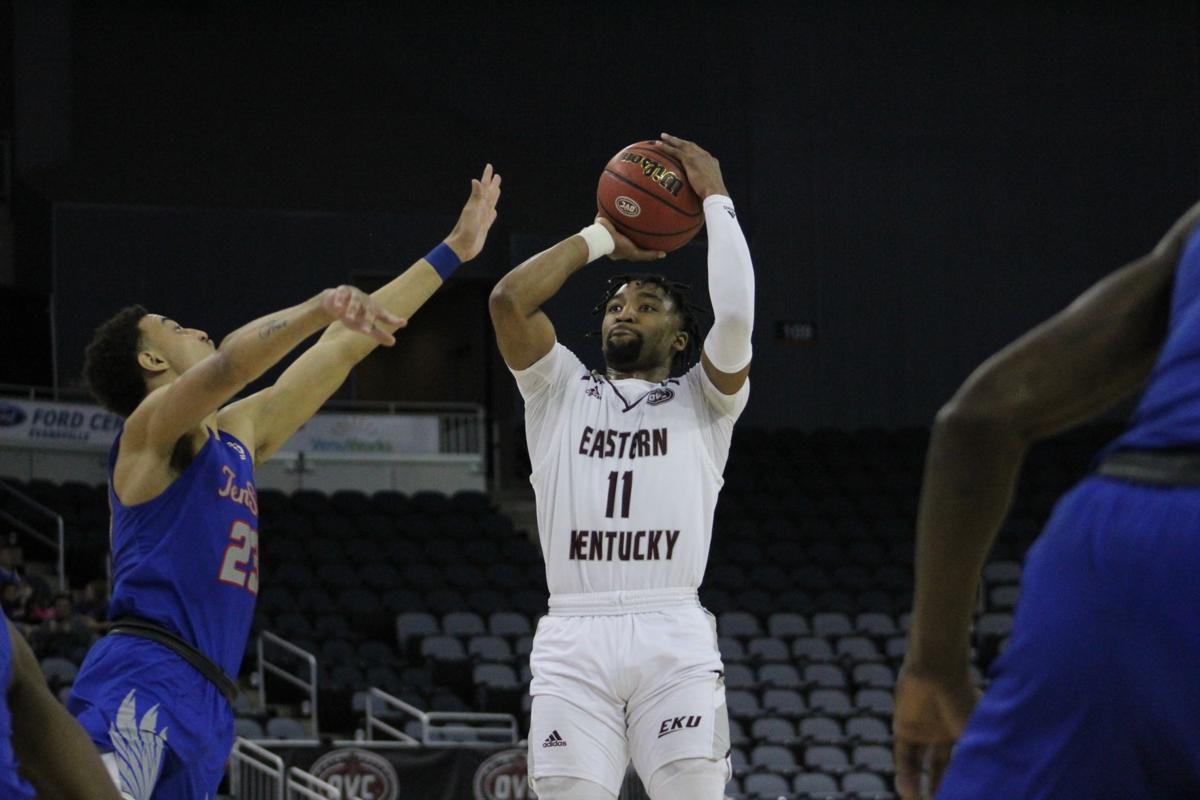 Jomaru Brown shoots over the TSU defender on Thursday at the Ford Center in the OVC tournament. The Colonels survived and advanced with a 58-48 win. 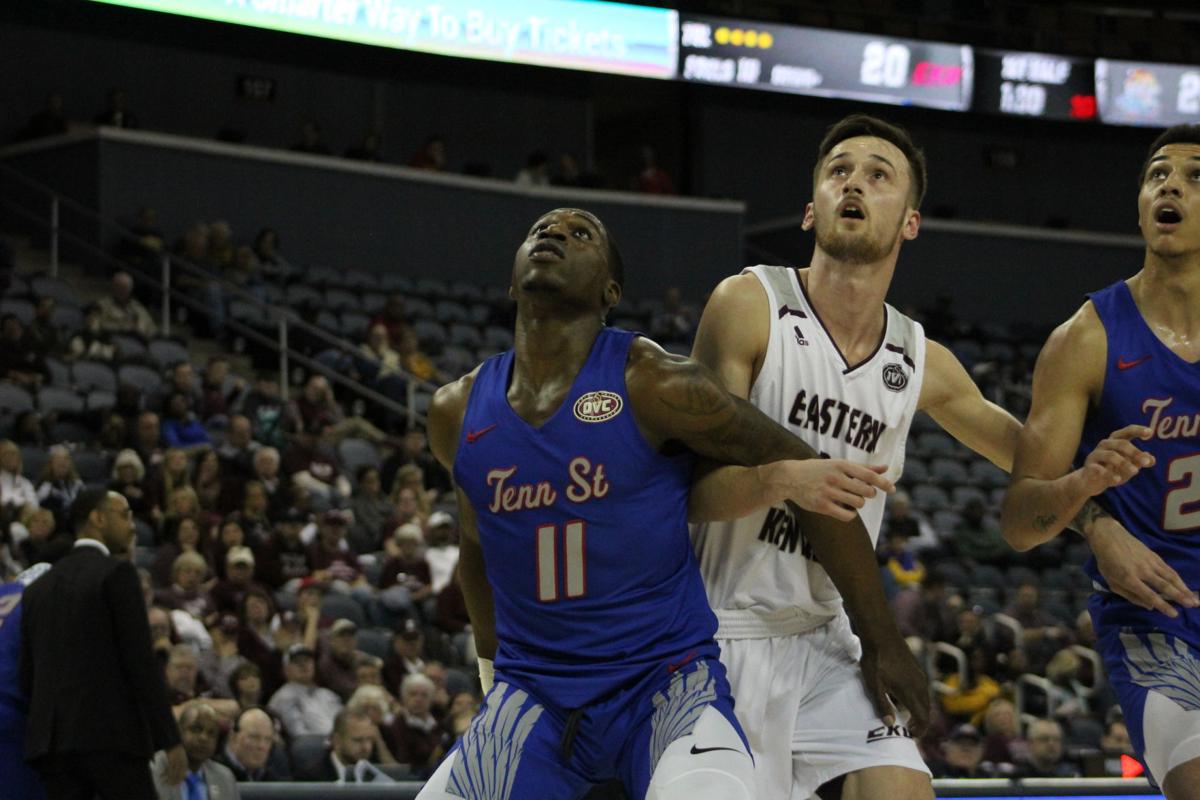 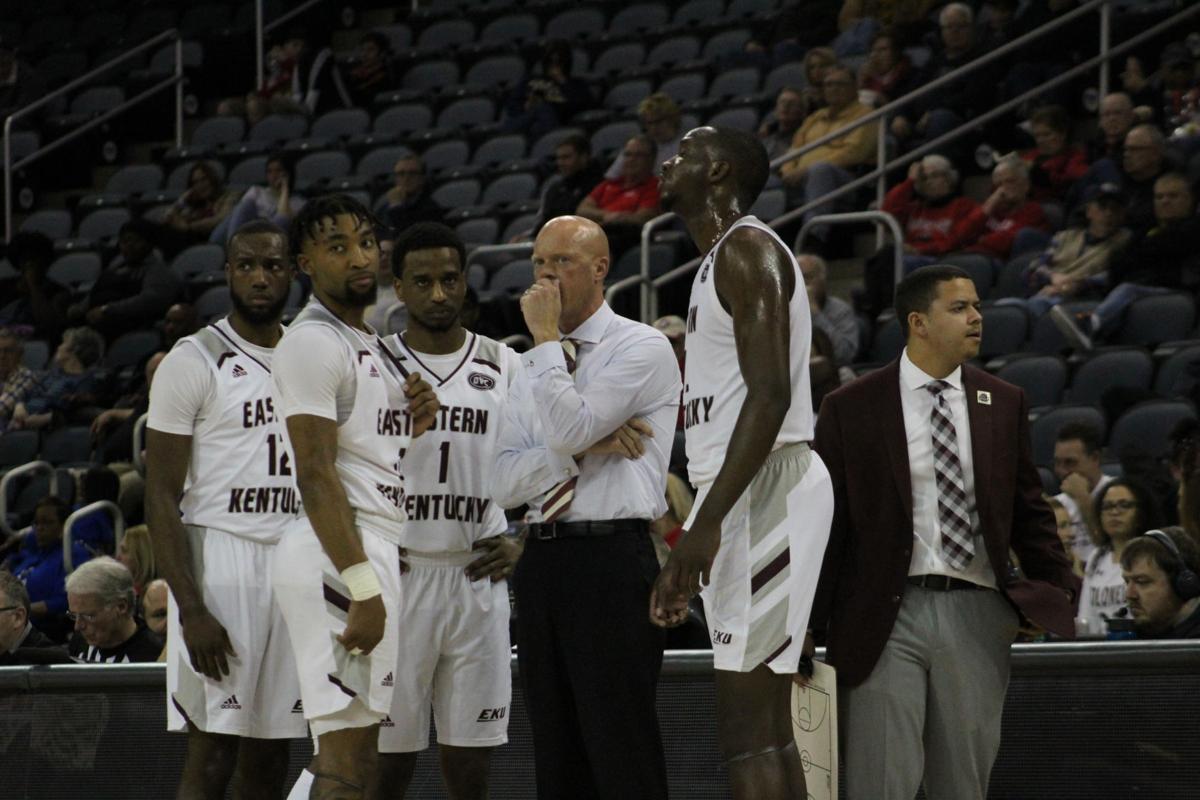 Head coach A.W. Hamilton talks with his team during the TSU game. 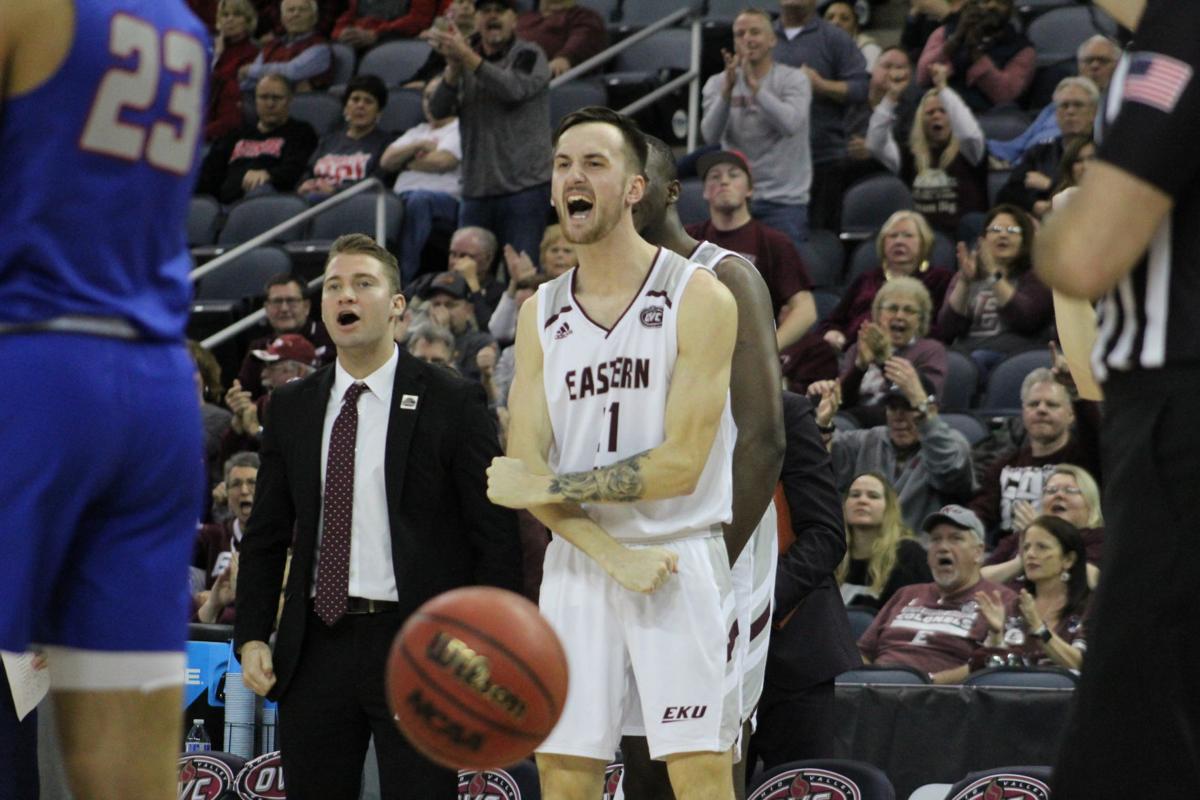 Lachlan Anderson cheers on his team during the second half of the TSU game. 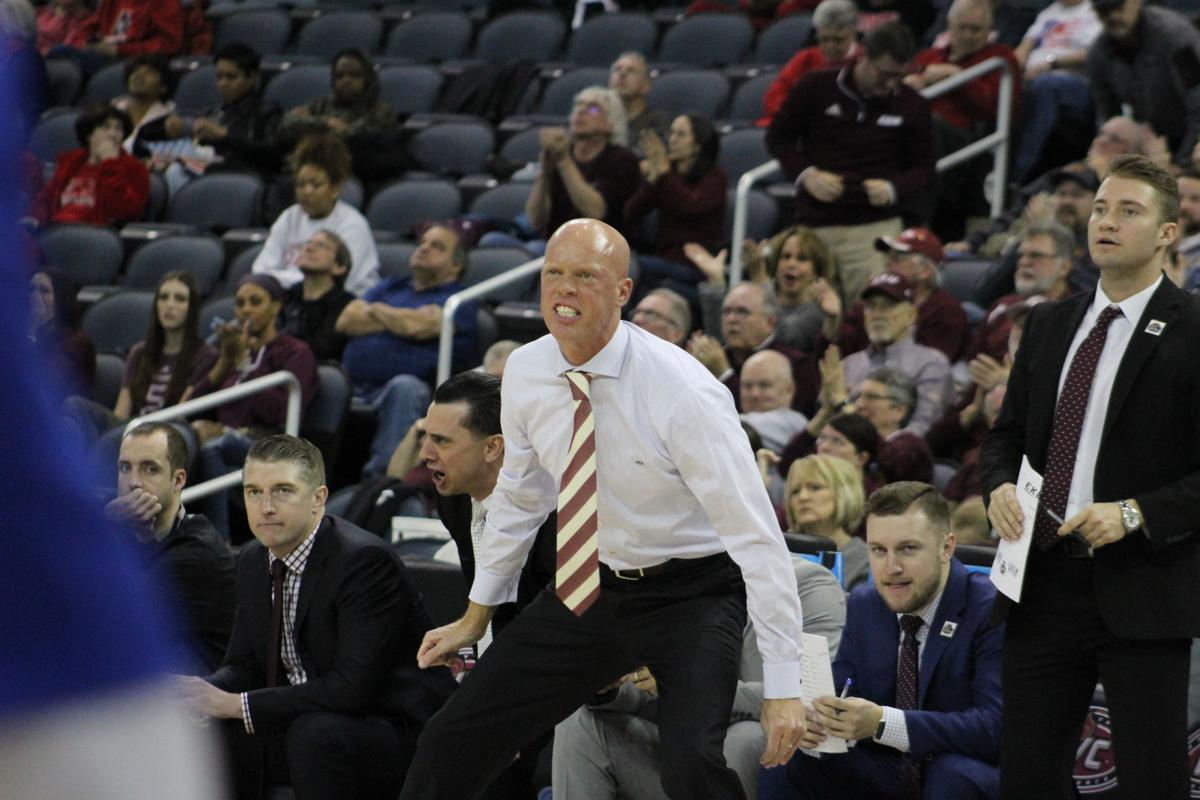 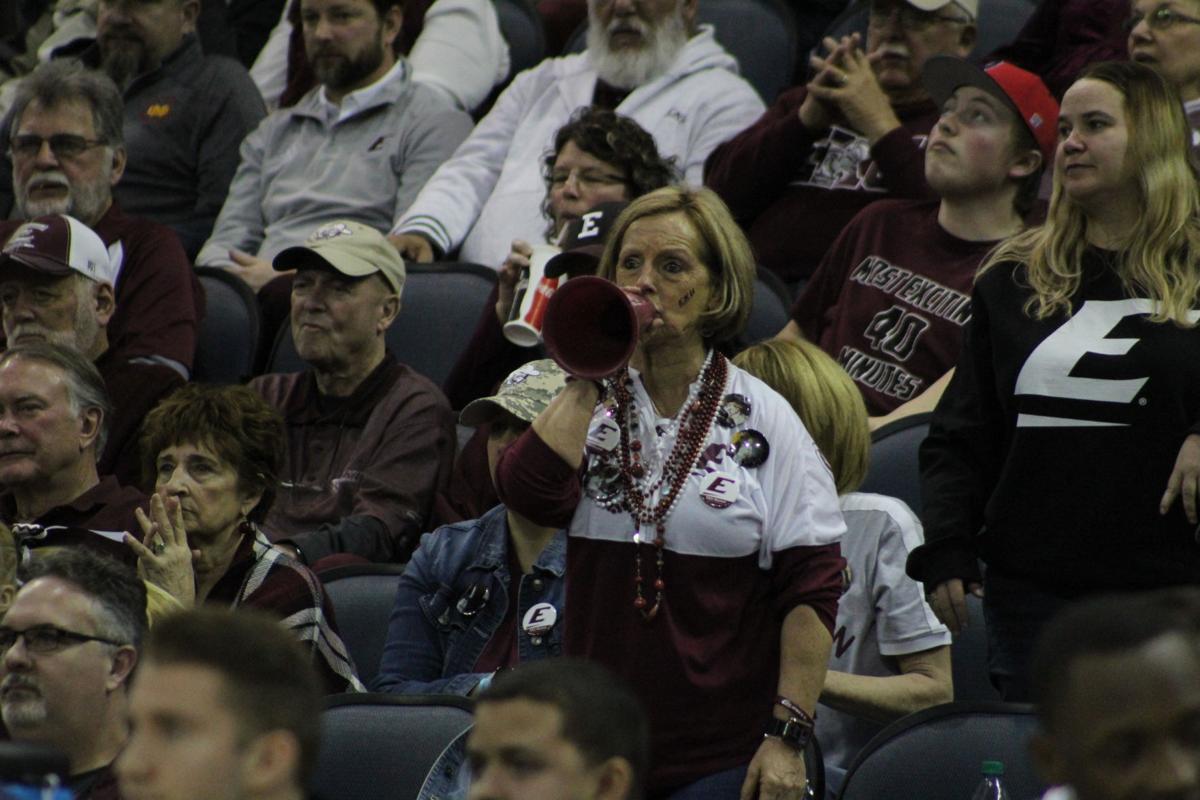 EKU super fan Donna Sowder cheers on the Colonels on Thursday in the OVC tournament.

Jomaru Brown shoots over the TSU defender on Thursday at the Ford Center in the OVC tournament. The Colonels survived and advanced with a 58-48 win.

Head coach A.W. Hamilton talks with his team during the TSU game.

Lachlan Anderson cheers on his team during the second half of the TSU game.

EKU super fan Donna Sowder cheers on the Colonels on Thursday in the OVC tournament.

The Eastern Kentucky University men’s basketball team picked up their first win in the Ohio Valley Conference tournament after defeating Tennessee State, 58-48 in the quarterfinals on Thursday.

This was the Colonels first appearance in the OVC tournament since 2015.

EKU came out the gate slow, but Jacquess Hobbs closed the 28-23 gap with a buzzer beater right before halftime. Hobbs finished the game with five points and five steals.

“I thought Hobbs' three at the buzzer at the end of the half, we needed that so bad,” said head coach A.W. Hamilton. “I said a little prayer when it went up in the air and I think that’s why it went in.”

Hamilton was proud of his team's effort and performance especially since it was the first time being in Evansville and in the OVC tournament for his team.

“It was a gutsy performance,” Hamilton said. “We needed to get this game under our belt and I think we did some really good things.”

EKU’s identity this season has been to press for 40 minutes and force turnovers and the Colonels did that against TSU. EKU forced 26 turnovers which led to 20 points for the Colonels.

Jomaru Brown led the Colonels with 12 points and four rebounds.

The Ford Center was painted with Maroon, and the Colonels were able to feed off the energy the fans brought.

“Our fans have been great all year,” Hamilton said. “They love our team, they love these guys.”

“I didn’t really have a good first half so I thought my teammates did a really good job trying to keep me level headed and keep my spirit up and I came out and tried to make a difference in the second half. I couldn't do it if they didn't believe in me.”

EKU shot 30.4 percent from the field and from 3-point range in the game.

Ty Taylor capped off the win with 11 points and three steals.

“My teammates found me and especially later in the first half,” Taylor said.

“It’s great for our program, our program needs that, our fans need that,” Hamilton said. “We look forward to playing again tomorrow.”

“I’m excited to be around so much success especially the turn of the guard with this team so it’s really big for us. I think we can do something special this weekend,” Taylor said.

EKU will face No. 1 seed Belmont University in the OVC Tournament semifinals on Friday at 8 p.m. EST.  The game will air live on ESPNU.