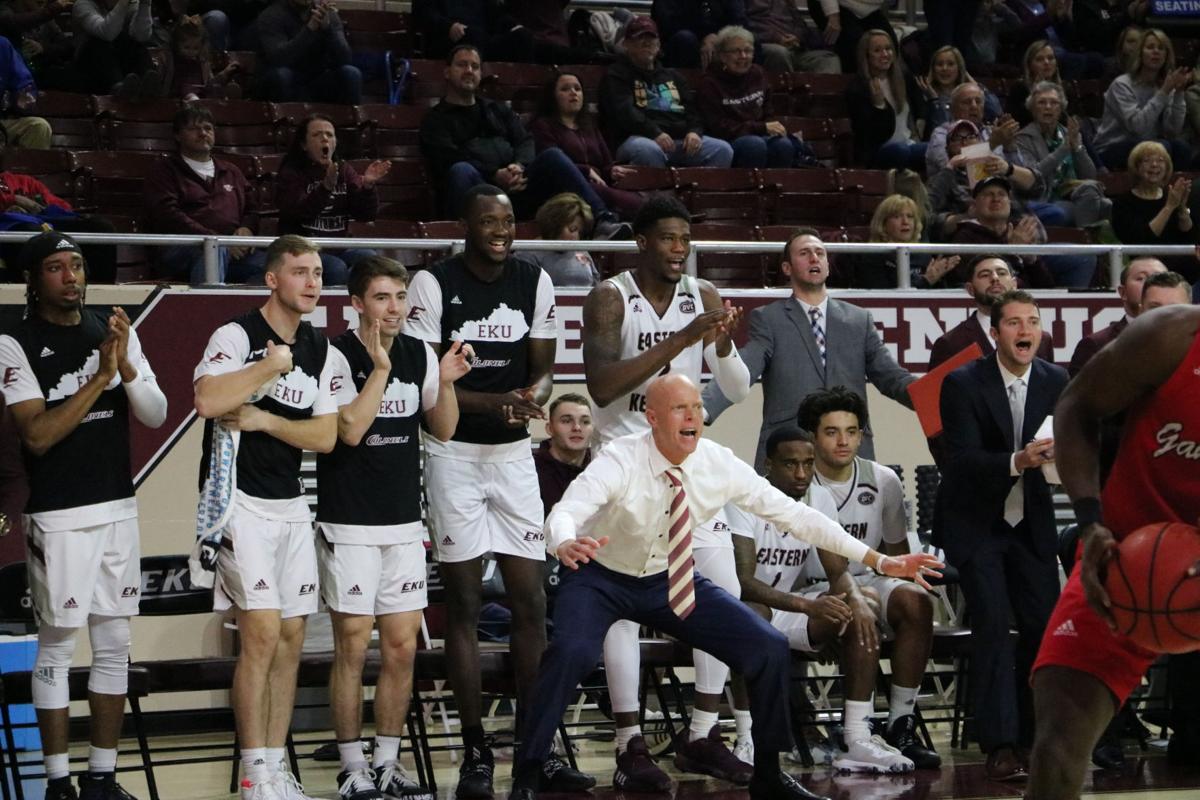 Head coach A.W. Hamilton yells to his team against Jacksonville State at McBrayer Arena. EKU started the OVC 3-1 and will be back at home on Jan. 30 against UT Martin. 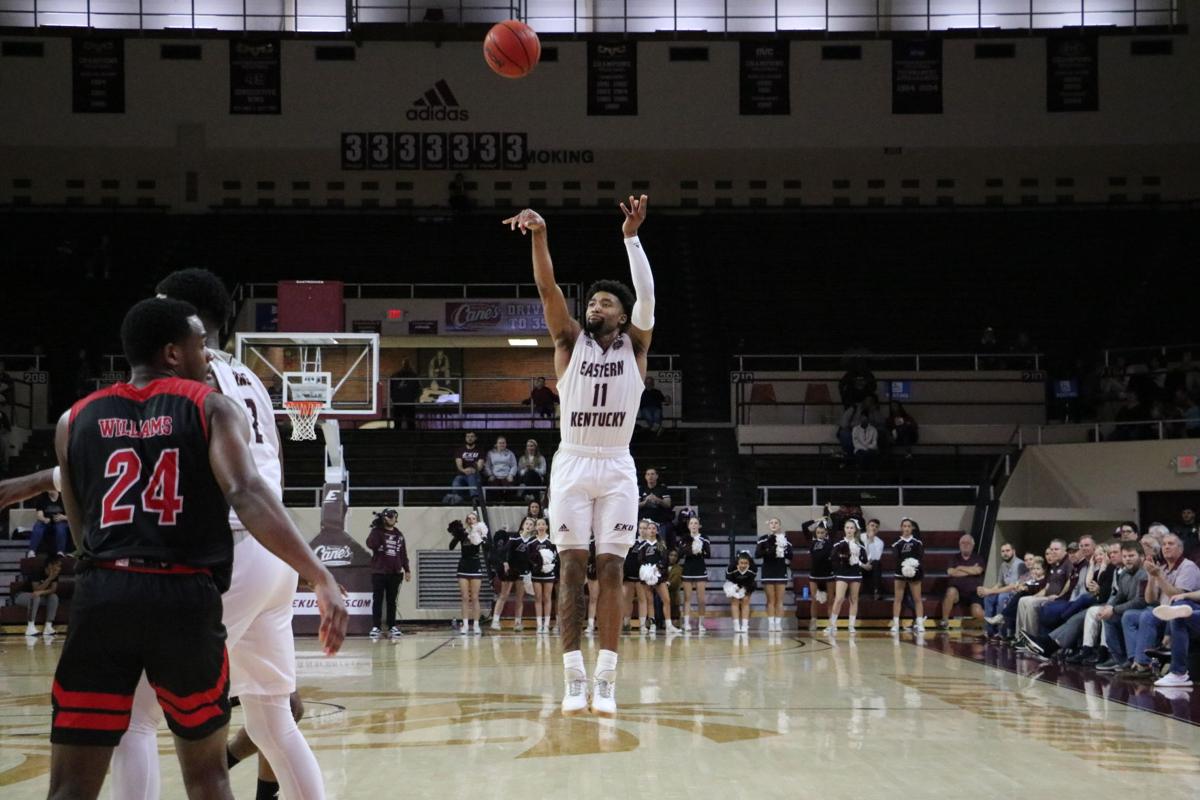 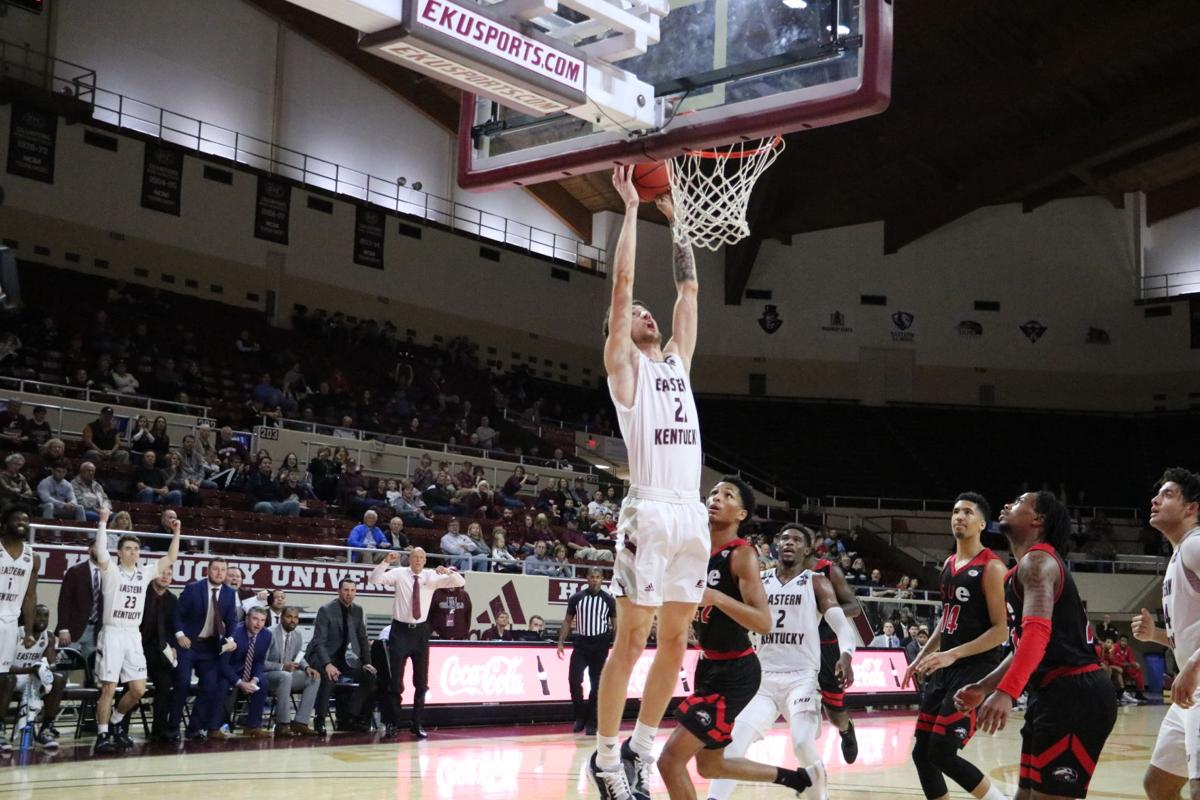 Lachlan Anderson goes up for a dunk against Jacksonville State in Richmond.

Head coach A.W. Hamilton yells to his team against Jacksonville State at McBrayer Arena. EKU started the OVC 3-1 and will be back at home on Jan. 30 against UT Martin.

Lachlan Anderson goes up for a dunk against Jacksonville State in Richmond.

Despite classes being out of session, Colonel basketball was in full swing over winter break. The Eastern Kentucky University men’s basketball team ended the break on a high note by going 3-1 in Ohio Valley Conference play. Big wins against Eastern Illinois and Southern Illinois University Edwardsville led to EKU’s best OVC start since the 2014-2015 season.

After a tough road-heavy preseason EKU was ready to start conference play, returning home to face Tennessee Tech in the first of four home games.

EKU got off to a great start scoring the first nine points of the game and never lost the early lead. A 21-6 run in the first half helped EKU lead 49-30 going into the break. TTU wouldn’t go down without a fight and used a 10-3 run to pull within 10 points. EKU quickly responded with a 10-2 run and never looked back. Tre King lead the Colonels to the 74-59 win, shooting 7-of-11 from the field for 15 points. Ty Taylor and Russhard Cruickshank both scored 13 points in the win to end a nine game losing streak and to start strong in the OVC.

Despite the effort, Jacksonville St. ended the half on a 14-5 run stretching their lead out to 13. Eastern would not go down easy in the second half and Brown and Lachlan Anderson got to work to slowly close the deficit and with 10 minutes left, the score was tied 59-59. Tied scores would remain a trend with EKU tying the score four more times in the half but failed to take the lead. Jacksonville St. finished the game out strong and claimed the 80-71 win. After the defeat Head Coach A.W. Hamilton urged his team to keep fighting, “as long as I’m here we are going to fight and play hard.”

EKU, looking for a win coming off their defeat by Jacksonville St., took on the Panthers of EIU. EKU started out strong taking an early lead of 24-6. The Colonels were able to hang on to the lead and go into the locker room ahead at the half, 46-32. EIU was able to take advantage of a good start in the second half and whittle down the EKU lead and take a lead of their own with seven minutes to play. Within the last seven minutes the game tied three more times as both teams fought to come out ahead. A pair of free throws by Ty Taylor capitalized off a jumper by Brown to put the Colonels ahead by four with 20 seconds left. EIU would not go down easy and responded with a three-pointer to bring them within one with eight seconds left to play.

Taylor found himself at the line again with only 4.8 seconds left in the game and made them both putting EKU ahead by three. EIU responded with an attempted buzzer beater but missed. EKU improved to 2-1 in the OVC with the 77-74 win.

The Colonels finished their four-game homestand facing off against SIU Edwardsville. Micheal Moreno kept the Colonels in the game early getting 11 of his 14 points in the first half. Tre King got the jumper to tie the game late in the half but SIUE would take the lead going into the break. Back and forth action started the second half with three ties in eight minutes. Lachlan Anderson took action coming off the bench and led the Colonels on an 8-2 run to take the 57-56 lead with 12 minutes left. A pair of dunks by Anderson would keep SIUE at bay when they got close down the stretch but EKU would lead the rest of the game. SIUE came close at the end but Brown and Cruickshank would go 6-6 from the free throw line to secure the 78-72 win.

EKU improved to 3-1 in the OVC over winter break, their best start to an OVC season since the 2014-15 season.

“It’s a really big deal..we haven’t been 3-1 since I’ve been here,” Anderson said after the win against SIUE.

The Colonels return home on Jan. 30 to face UT Martin at McBrayer Arena.