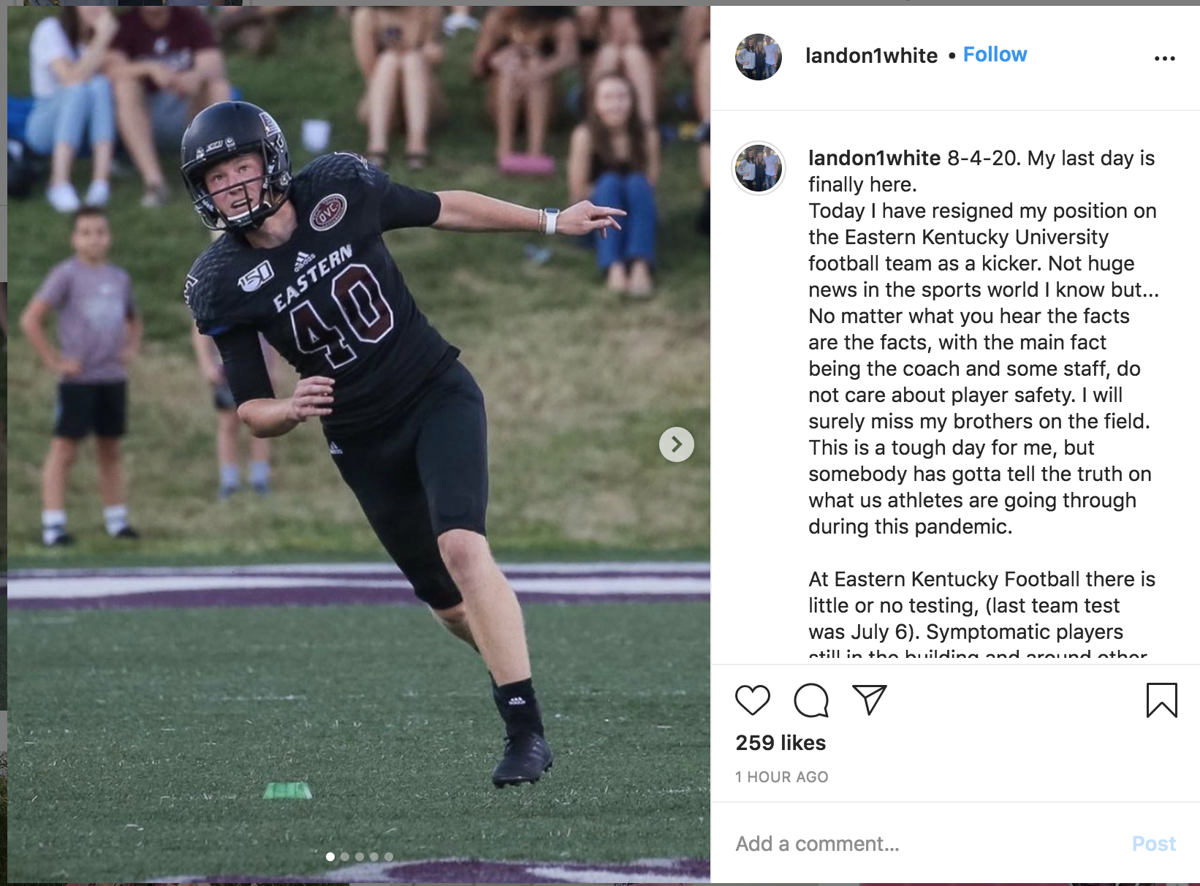 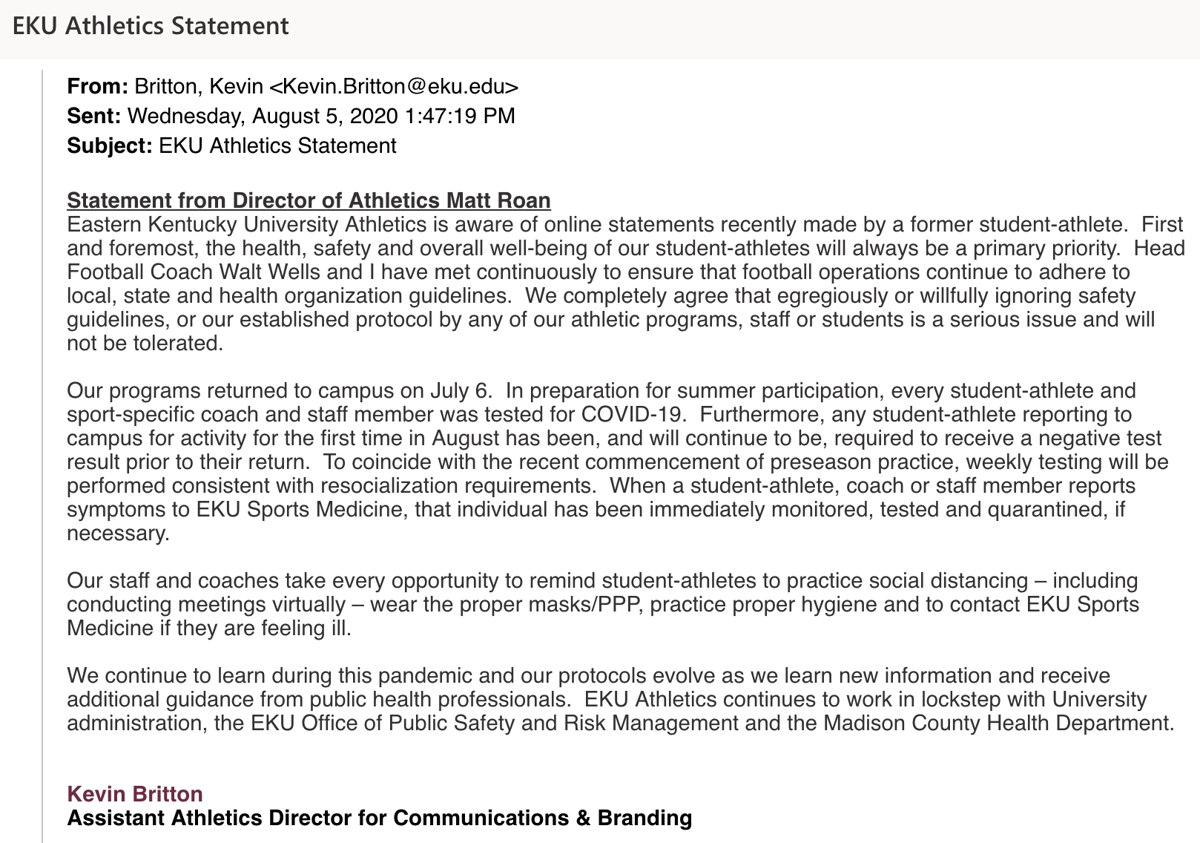 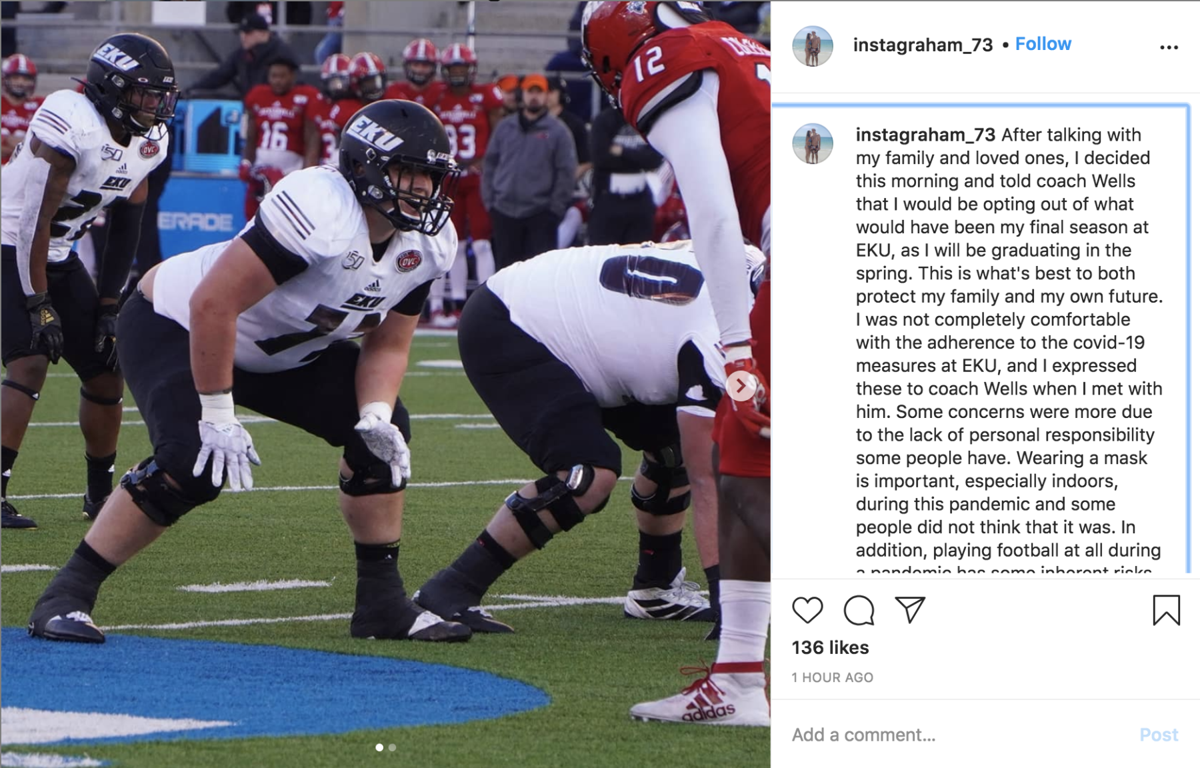 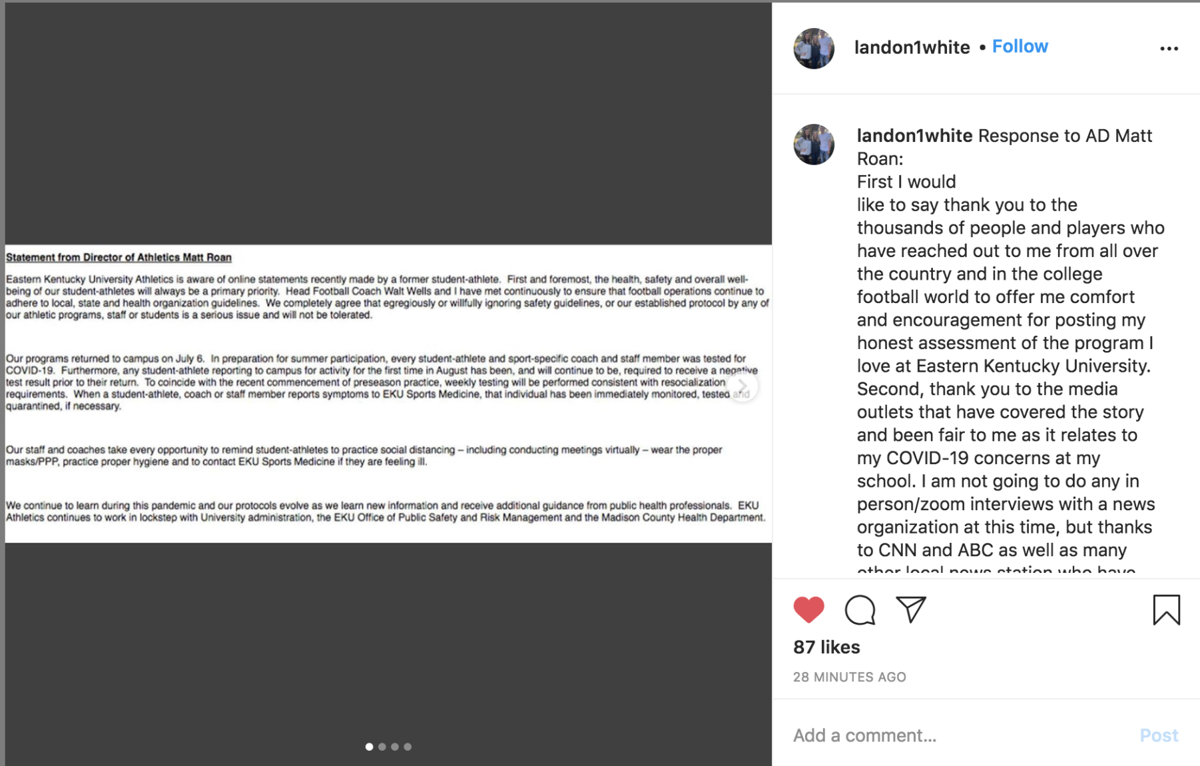 “First I would like to say thank you to the thousands of people and players who have reached out to me from all over the country and in the college football world to offer me comfort and encouragement for posting my honest assessment of the program I love at Eastern Kentucky University,” White wrote.

White thanked the many media outlets for covering his story and said he will not be conducting any in-person or online interviews.

“I am not going to do any in person/zoom interviews with a news organization at this time, but thanks to CNN and ABC as well as many other local news stations who have called or messaged me to help make sure my voice is being heard,” he wrote.

White wrote that he asked for a meeting with his position coach and was given about two-three minutes to talk about his concerns and the situation.

“I told him I was uncomfortable with the Covid-19 protocols and felt I should not be there for the health of me, my family, and my teammates. The reaction was very nonchalant and ended with him saying ‘I’ll run it up the chain of command’,” White wrote.

His post continued, “No one offered me any assistance, No one said here are your options or what happens to me as it relates to playing career in the future. No call from the athletic director to help me with my Covid-19 questions or an explanation. Not a single word except a statement defending coaches and their negligence.”

In his lengthy response, White wrote that EKU has still not conducted any COVID-19 testing. He says that the last round of testing took place on July 6.

“This is now a week after fall camp started and still nothing. It’s been exactly a month.... If the health and safety of your athletes is “Primary Priority” what’s the hold up on the tests? The Athletic department said “Weekly testing will be performed,” White wrote.

White ended his post by saying this situation is way deeper than a game and he is glad that his brothers (teammates) are also taking a stand for what is in their best interest and as well as everybody else around them.

The Richmond Register is reporting that a third player, Tre Turner, has quit the team due to the same concerns as White and Ashkettle.

The Eastern Progress is working to independently confirm this information and will have an update when more information is available.

A day after kicker Landon White announced he left the team, Eastern Kentucky University football junior offensive lineman Graham Ashkettle announced in a post on Instagram that he has opted out of his senior season due to COVID-19 concerns and a risk to player safety within the football program.

“After talking with my family and loved ones, I decided this morning and told coach Wells that I would be opting out of what would have been my final season at EKU, as I will be graduating in the spring. This is what's best to both protect my family and my own future,” Ashkettle wrote.

Ashkettle continued, “I was not completely comfortable with the adherence to the covid-19 measures at EKU, and I expressed these to coach Wells when I met with him. Some concerns were more due to the lack of personal responsibility some people have. Wearing a mask is important, especially indoors, during this pandemic and some people did not think that it was.”

Ashkettle’s announcement on social media came hours after EKU Athletics released a statement claiming to adhere to government guidelines and regulations in response to COVID.

Ashkettle also stated that playing football during a pandemic has inherent risks.

“You don't know what's going on in other programs, and playing football means to be face to face with those other players. Also, teammates could be asymptomatic and you still have to go head to head against them in practice maskless. I decided that it was not worth the risk for me,” he wrote.

Ashkettle wrote that he was glad he made the decision to play at EKU. He also mentioned that he will miss his teammates and playing the sport he loves.

“I am very blessed to be able to play a sport that I love for as long as I have. However, some people don't understand the all of sacrifice that goes into being a college athlete. Being in season means having almost no time to yourself and your body hurting all of the time, while also having a full class load to study for. If I had one piece of advice for anyone considering college athletics, it would be to do it only if you love it. And I did,” Ashkettle wrote.

As of publication, Ashkettle is still on the EKU football roster.

“Eastern Kentucky University Athletics is aware of online statements recently made by a former student-athlete. First and foremost, the health, safety and overall well-being of our student-athletes will always be a primary priority. Head Football Coach Walt Wells and I have met continuously to ensure that football operations continue to adhere to local, state and health organization guidelines. We completely agree that egregiously or willfully ignoring safety guidelines, or our established protocol by any of our athletic programs, staff or students is a serious issue and will not be tolerated,” Roan said in a statement.

Roan's statement continued, “Our programs returned to campus on July 6. In preparation for summer participation, every student-athlete and sport-specific coach and staff member was tested for COVID-19. Furthermore, any student-athlete reporting to campus for activity for the first time in August has been, and will continue to be, required to receive a negative test result prior to their return. To coincide with the recent commencement of preseason practice, weekly testing will be performed consistent with resocialization requirements. When a student-athlete, coach or staff member reports symptoms to EKU Sports Medicine, that individual has been immediately monitored, tested and quarantined, if necessary.”

“We continue to learn during this pandemic and our protocols evolve as we learn new information and receive additional guidance from public health professionals. EKU Athletics continues to work in lockstep with University administration, the EKU Office of Public Safety and Risk Management and the Madison County Health Department,” Roan said.

The Eastern Progress is working to independently confirm this information.

Eastern Kentucky University football kicker, Landon White, announced in an Instagram post Tuesday, Aug. 4 that he has resigned from his position on the team due to frustrations and concerns surrounding COVID-19 and player safety.

In the post, White wrote, “No matter what you hear the facts are the facts, with the main fact being the coach and some staff, do not care about player safety.”

White’s post continued, “This is a tough day for me, but somebody has gotta tell the truth on what us athletes are going through during this pandemic.”

White is a redshirt junior from Richmond and played in three games for the Colonels last season.

White claimed that head coach Walt Wells, who he does not name directly in his post, does not enforce the campus-wide mask mandate.

“The head coach does not care about his players as well as his staff and their families,” White said. “He cares about the 500K (dollars) we are about to earn by playing WVU (West Virginia University) in Morgantown at the end of the month.”

He wrote that Wells holds meetings where hundreds of athletes and staff are crammed together with no social distancing and masks involved.

He cited concerns that players are endangering the EKU cafeteria staff in Case Dining Hall and other students who are now arriving on campus.

“Masks are routinely not worn while players are constantly being reminded by the dining hall staff instead of our coaches to keep it on,” White wrote.

White claimed there is little or no COVID-19 testing of athletes and staff. White wrote that the last team COVID-19 test was conducted on July 6.

“Symptomatic players (are) still in the building and around other teammates. But the same day people had symptoms we continued to practice instead of face the issue head on. Keep in mind we started fall camp on Friday July 31st. We have plenty of players and staff test positive over the past month,” White said.

EKU Athletics first announced Thursday, July 2 that there were six positive COVID-19 cases among athletes and staff. Ten additional cases were reported upon Eastern Progress inquiry on July 18. As of July 28, EKU Athletics reported there were no new cases from the 210 tests conducted. Officials did not indicate when tests were last conducted.

White’s announcement came in the midst of a national movement of collegiate and professional athletes speaking out about player safety during the COVID-19 pandemic.

The Eastern Progress is working to independently verify claims made in White’s post and has reached out to EKU athletics.