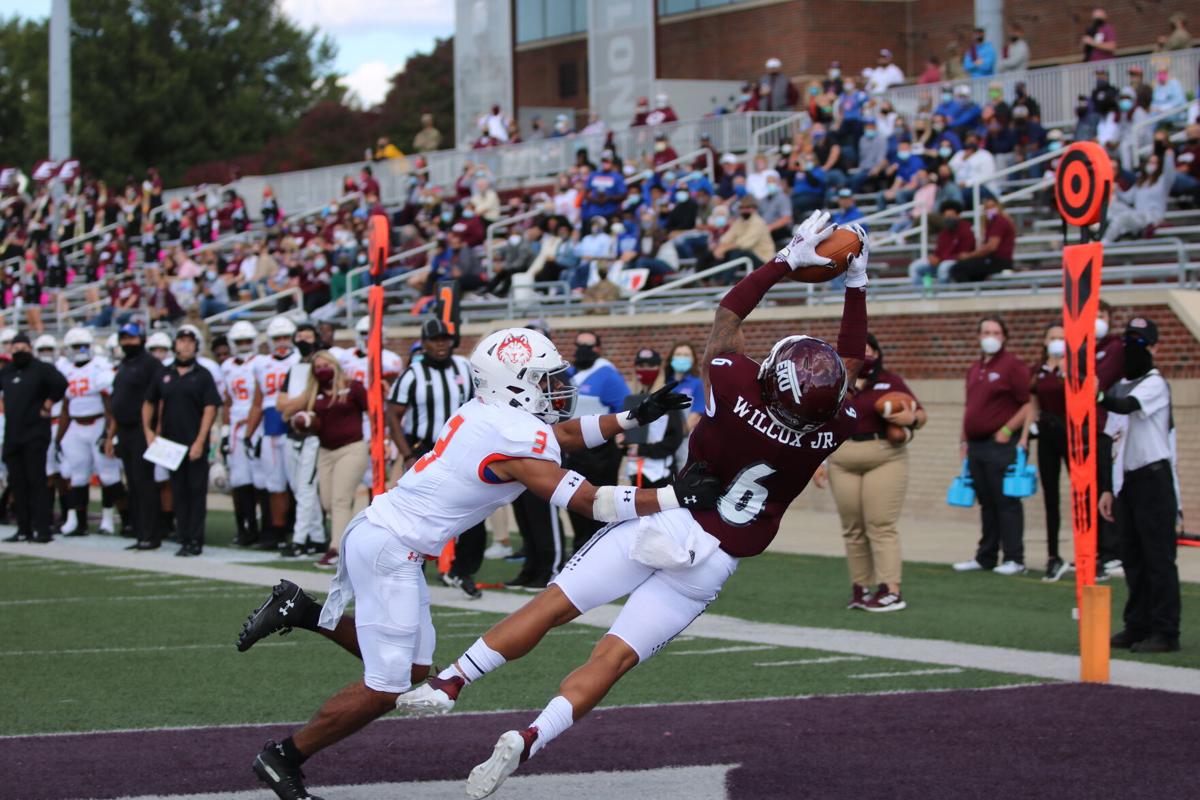 Matt Wilcox Jr. dives for a touchdown catch against Houston Baptist on Oct. 3. 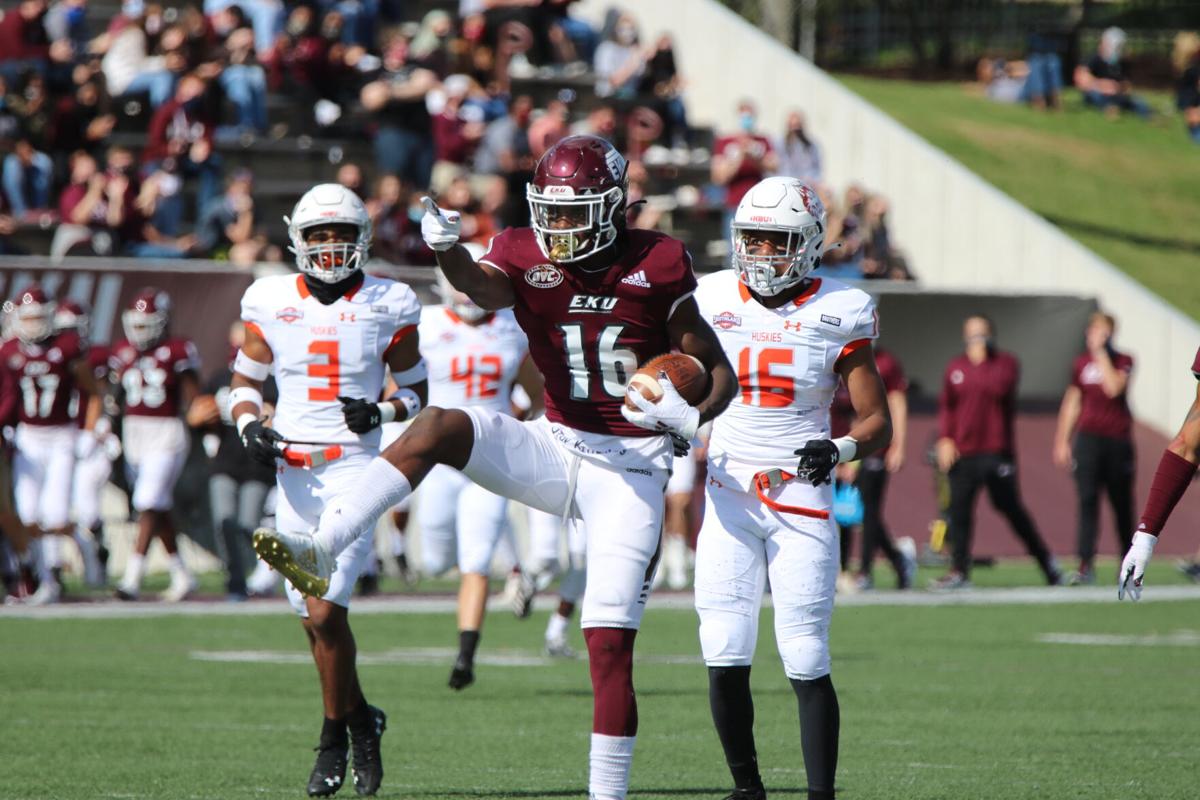 Keyion Dixon celebrates a first down after a catch on Saturday against Houston Baptist. 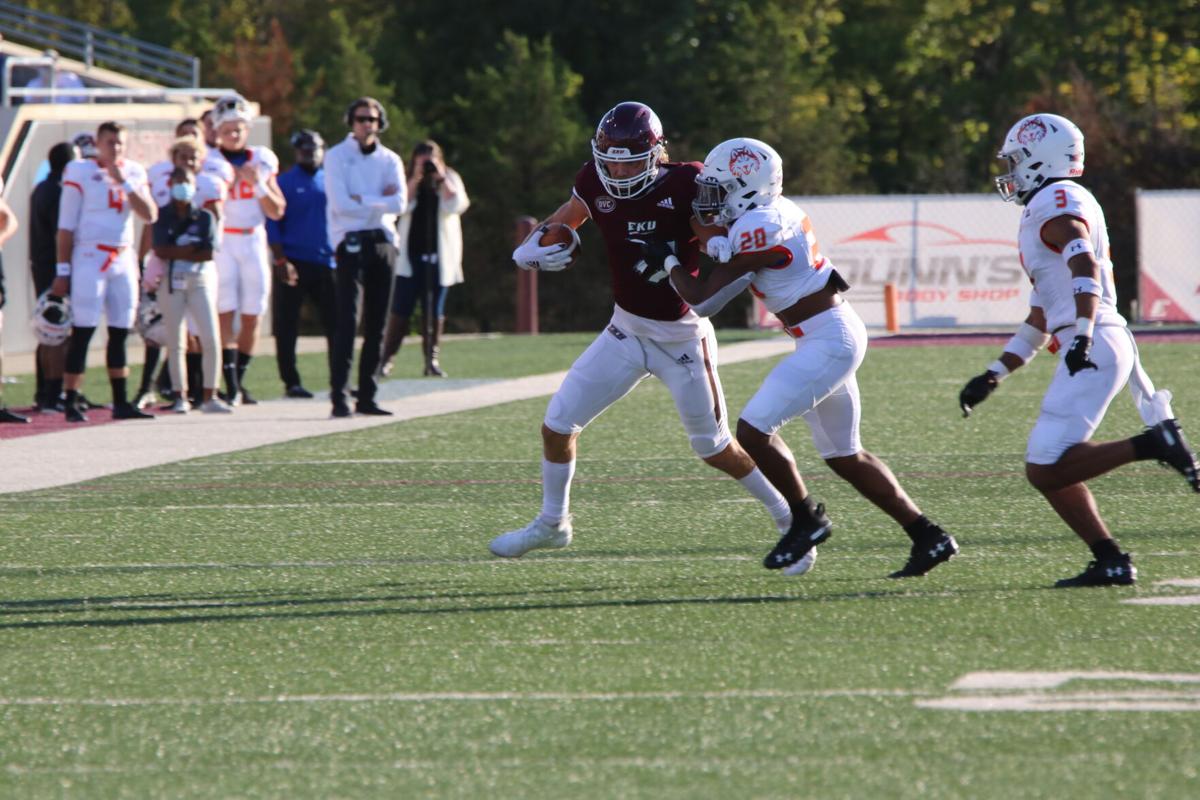 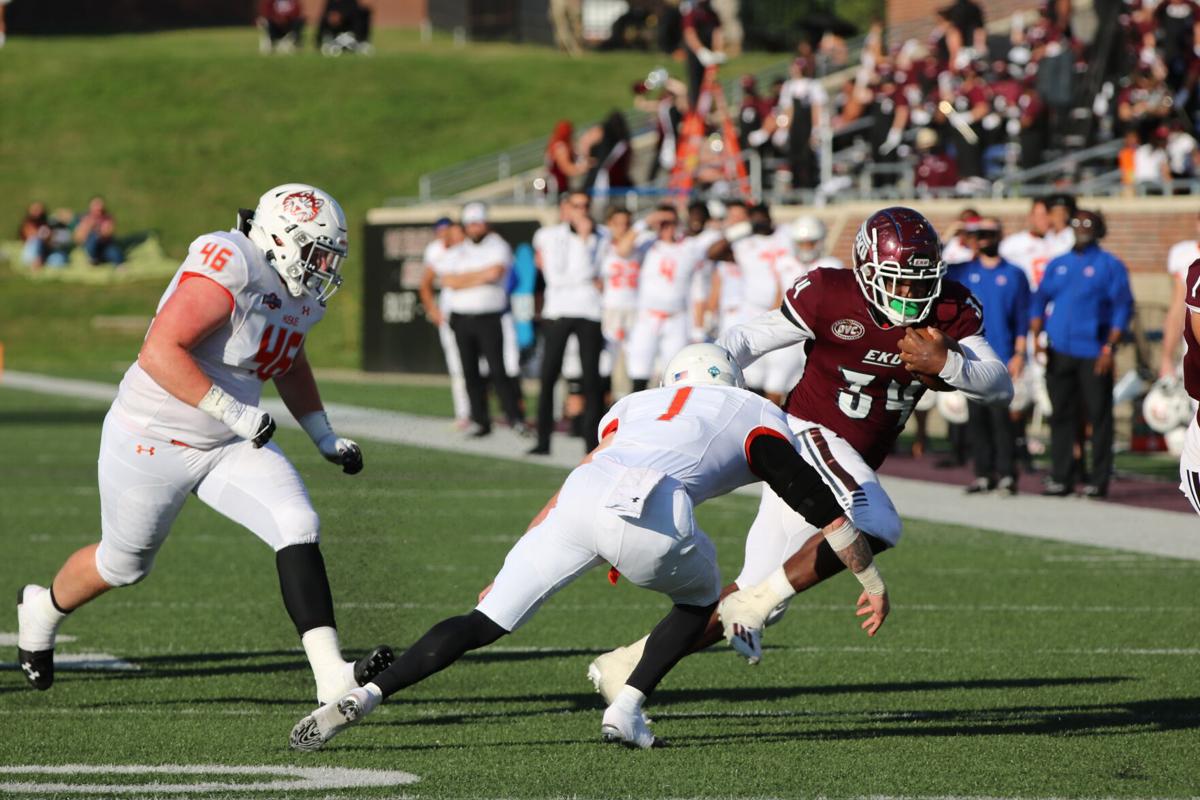 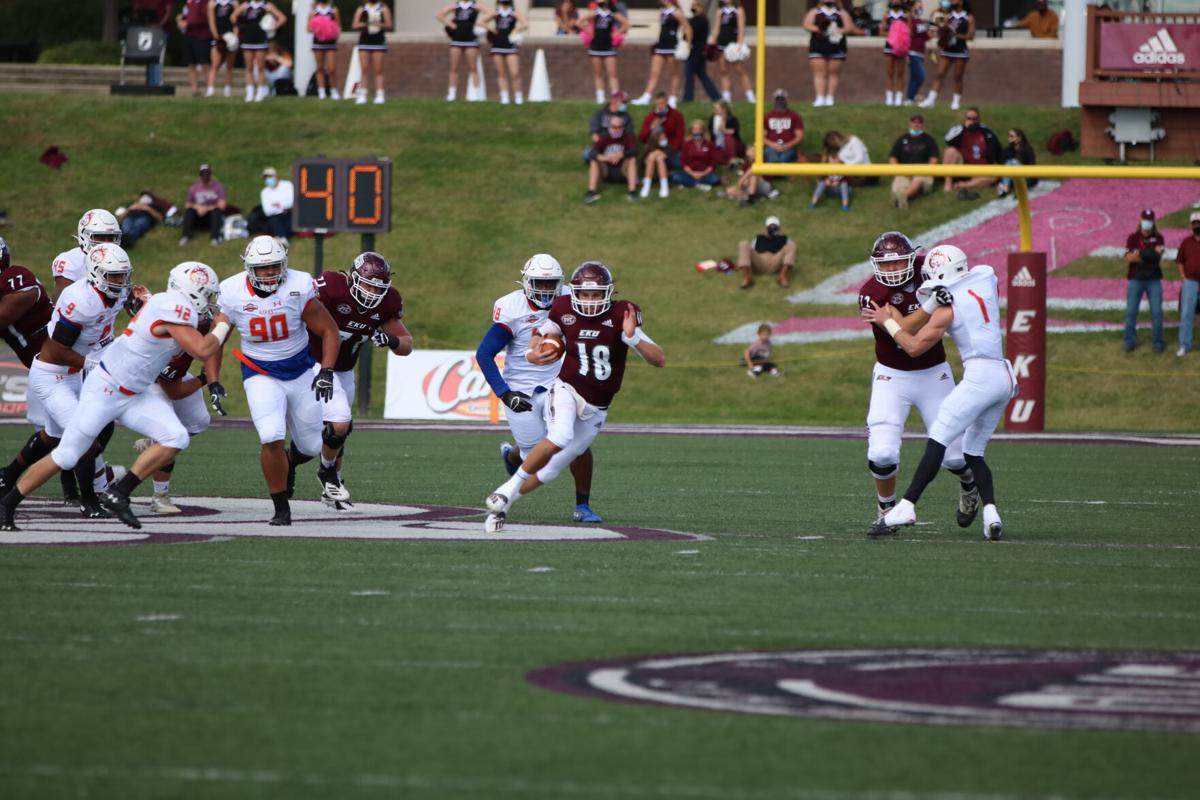 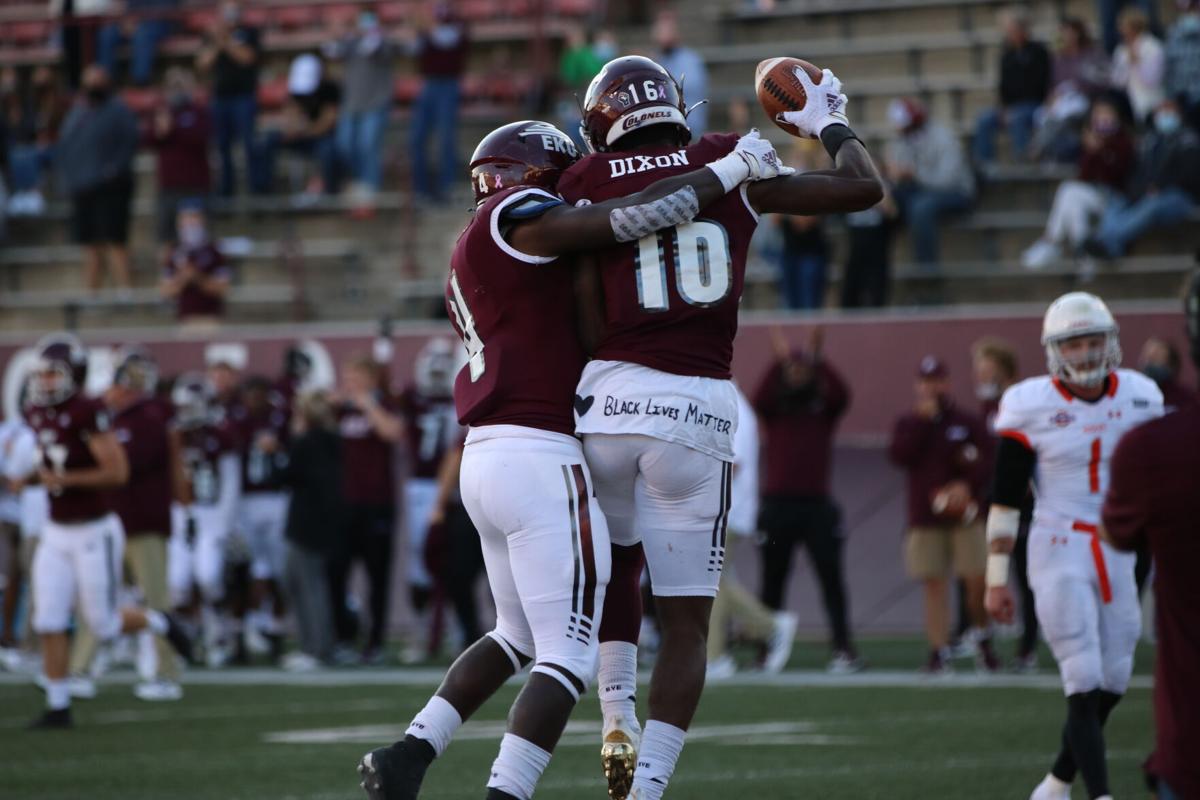 Colonels celebrate a touchdown against Houston Baptist on Saturday at Roy Kidd Stadium.

Matt Wilcox Jr. dives for a touchdown catch against Houston Baptist on Oct. 3.

Keyion Dixon celebrates a first down after a catch on Saturday against Houston Baptist.

Colonels celebrate a touchdown against Houston Baptist on Saturday at Roy Kidd Stadium.

The Eastern Kentucky University football team fell at home on Saturday to Houston Baptist University by a final score of 33-30.

EKU struggled in the first quarter, as the Huskies scored two touchdowns only two minutes apart making it 14-0 early on. EKU quarterback Parker McKinney threw a 10-yard touchdown pass to Matt Wilcox Jr. to put the Colonels on the scoreboard with only 1:32 left before the first quarter ended to close the gap, 14-7.

“I’m very proud how they fought back… I’m pleased with their effort and physicality and we’ve to continue to get better… this was a total team effort,” head coach Walt Wells said.

Early in the second quarter Houston Baptist kicked a 24-yard field goal and scored a touchdown right before the half with :43 left. Taking a large lead against the Colonels, 24-7.

“Well, we had to settle down and our defense did. On offense we had opportunities but we gave away a few turnovers and that hurt us,” Wells said.

After the half, Wells said they were able to catch up with the Huskies offense and slow down their scoring.

With 10:53 left in the third quarter, McKinney threw a seven-yard pass to Wilcox Jr. for a touchdown, making it 24-14. With minutes left of the third quarter, Alexander Woznick kicked a 26-yard field goal. Houston Baptist responded at the end of the quarter with a 65-yard touchdown pass to hold onto a 31-17 lead.

“We have to do better with securing the football in the air and on the ground,” Wells said.

To start the final quarter, Booth had a 29-yard touchdown run for the Colonels. With 4:04 left in the game, McKinney passed to Keyion Dixon for a 27-yard touchdown to tighten the score to 31-30. After an extra point attempt to tie the game was blocked by the Huskies, it was returned for two-points.

The Colonels fall to 1-3 on the season with the 33-30 loss to Houston Baptist.

“It’s always good being back at Roy Kidd Stadium… we had a good crowd and they got loud there at the end… hate to send them home disappointed but we’ll see where this thing goes,” Wells said.

The Colonels turned the ball over three times.

McKinney had a total of 296 yards passing and threw for three touchdown passes.

Alonzo Booth had a total of 108 yards rushing and one touchdown.

Keyion Dixon had a total of 112 yards receiving, 15 yards rushing and one touchdown.

Wilcox Jr. had a total of 27 yards receiving and two touchdowns.

Jacquez Jones had a total of 54 yards receiving.

EKU enters an off week before traveling to play at Troy on Oct. 17. Kickoff in Troy, Alabama is scheduled for 7 p.m.