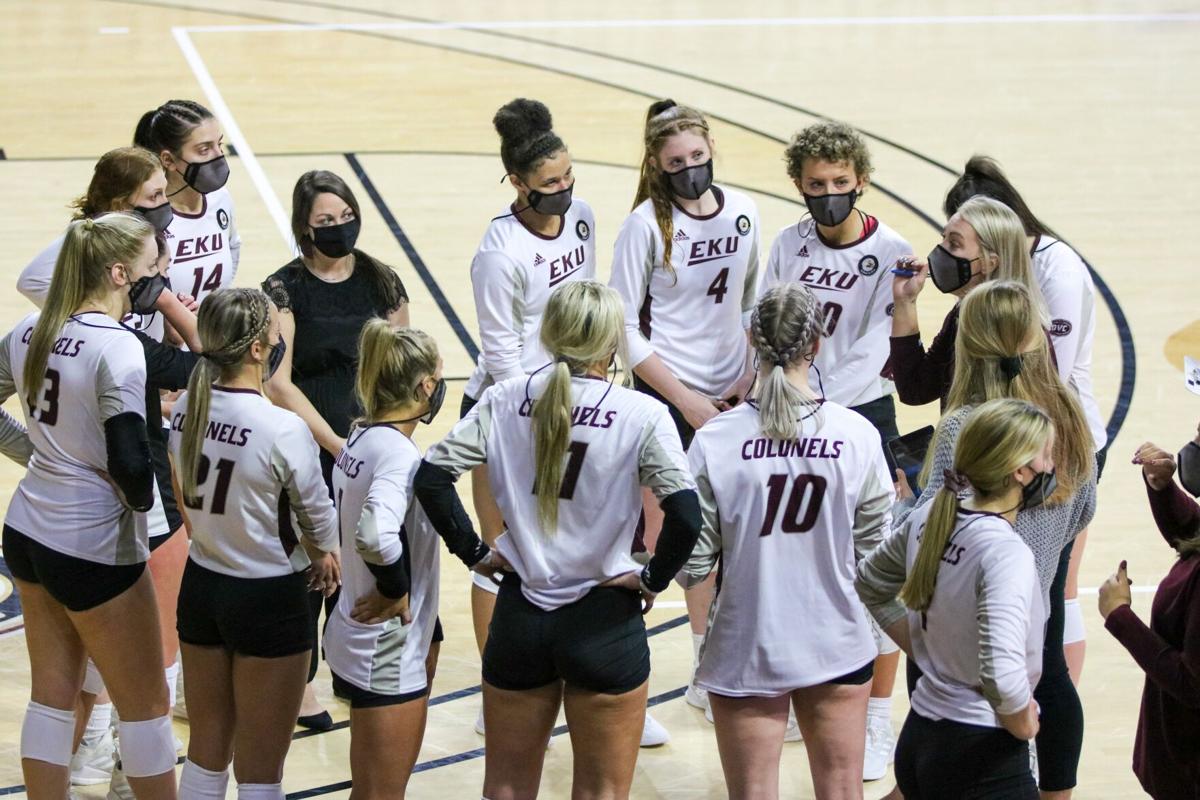 Eastern Kentucky University volleyball team during a timeout against UT Martin on Feb. 7 at McBrayer Arena. 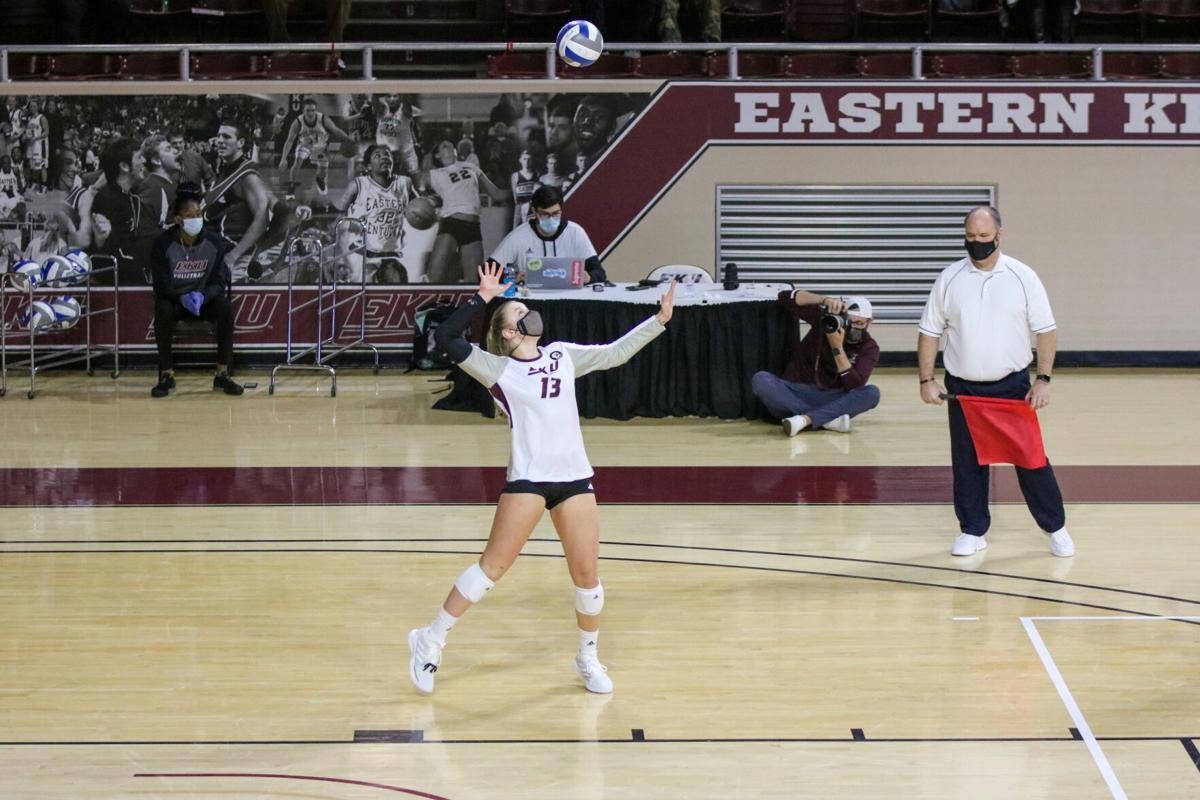 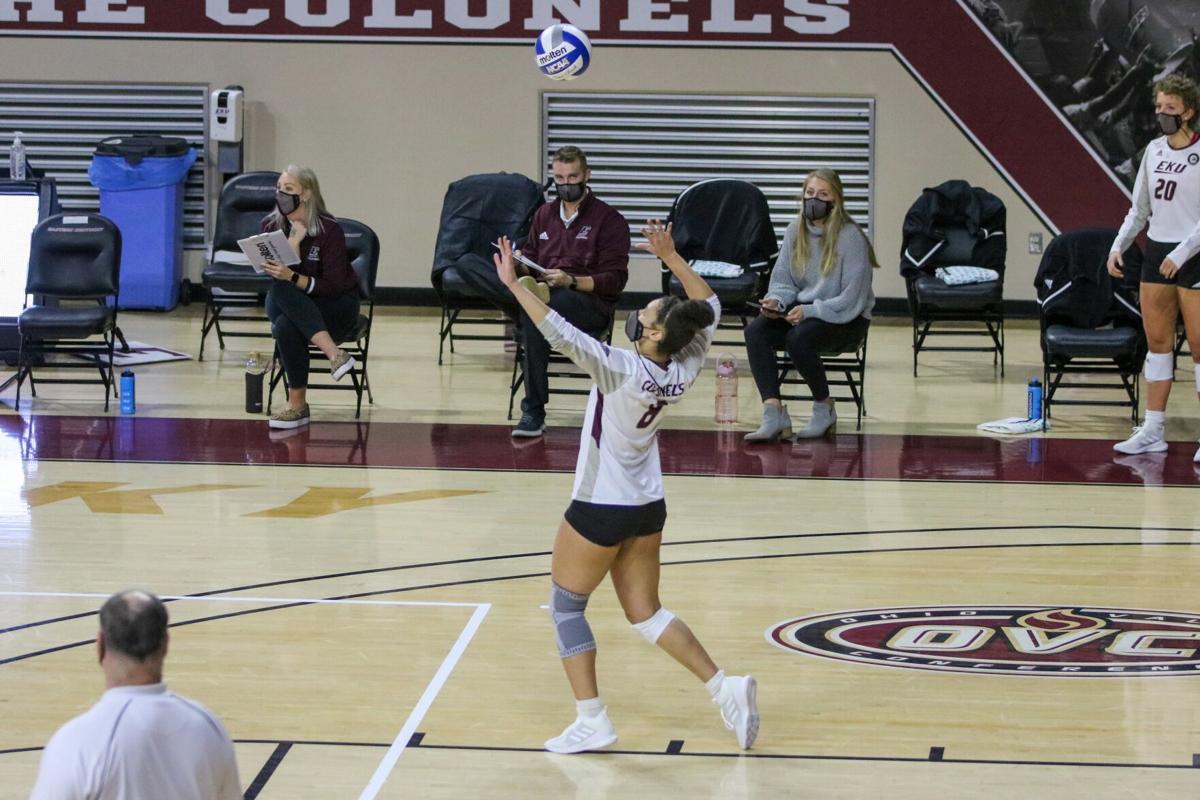 Eastern Kentucky University volleyball team during a timeout against UT Martin on Feb. 7 at McBrayer Arena.

Eastern Kentucky University volleyball fell to University of Tennessee Martin in the 2021 season opener, 3-1 on Sunday.

After a 9-21 finish last season, the Colonels entered this season touting eight new players and five returners. For head coach Johnna Bazzani, all she asks is that the team works together despite the lack of experience.

“I think the biggest piece we’re missing is the experience, and that kind of showed tonight,” said Bazzani.

The Colonels began the game with a three-point run before the Skyhawks followed with a five-point run of their own. EKU went on a 4-0 run late in the first set, but fell 25-23. Michalak had six kills on ten swings in set one.

EKU and UT Martin were tied 8-8 in the second set when the Skyhawks went on a 4-0 run. Later in the set, EKU called timeout down, 18-21. Following the timeout, the Colonels rattled off three straight points on kills by junior middle blocker Maddy Campbell, junior middle blocker Mikayla Logan, and Mitchell. An error by the Skyhawks prompted a timeout with EKU leading by one, and the Colonels pulled away to win the set 25-22. The Colonels ended the set on a 7-1 run.

EKU started set three with a 5-2 lead, but UT Martin responded with five straight points until an attack error ended the run. EKU followed up UT Martin’s run with a five-point run of their own to go ahead 10-7. UT Martin ultimately won the set 25-22.

UT Martin jumped out to an early 7-2 lead in the fourth set. EKU pulled within one, but a string of points gave UT Martin a commanding lead at the end, and the Skyhawks finished the set 25-19, and the game 3-1.

Despite the loss, Bazzani noted the balanced offense of the Colonels was indicative of the work of setter Audrey Eurton.

“That’s a nice thing about having a good setter is that they know how to spread the offense and spread the net,” Bazzani said. “The more that we can get our middles involved and get our pins involved is something as a team we’re looking to do, and the more that we can do that, it’s going to be really hard for the other teams to stop us.”

Another bright spot was the defensive effort of Schoen. After playing as a defensive specialist for two years, Schoen assumed the libero position this season.

“She’s been very consistent with passing and even on her defense,” said Bazzani. “I think the biggest key in looking for a libero is that consistency in knowing how to lead in the back court. She’s one of our captains, and seeing her improve and getting her numbers up from a passing percentage is really key.”

Though it was just the first game of the season, Bazzani sees a bright future for this team.

“This is a great team and we’re going to come back from this,” Bazzani said. “We’re gonna beat some teams in the OVC this year, it’s just getting that first game jitters out of the way.”

EKU returns to action Feb. 8 against UT Martin at 4 p.m.