You have permission to edit this article.
Edit
Welcome, Guest
Home
News
Sports
Opinion
Features
Visuals
Podcasts
About
1 of 3 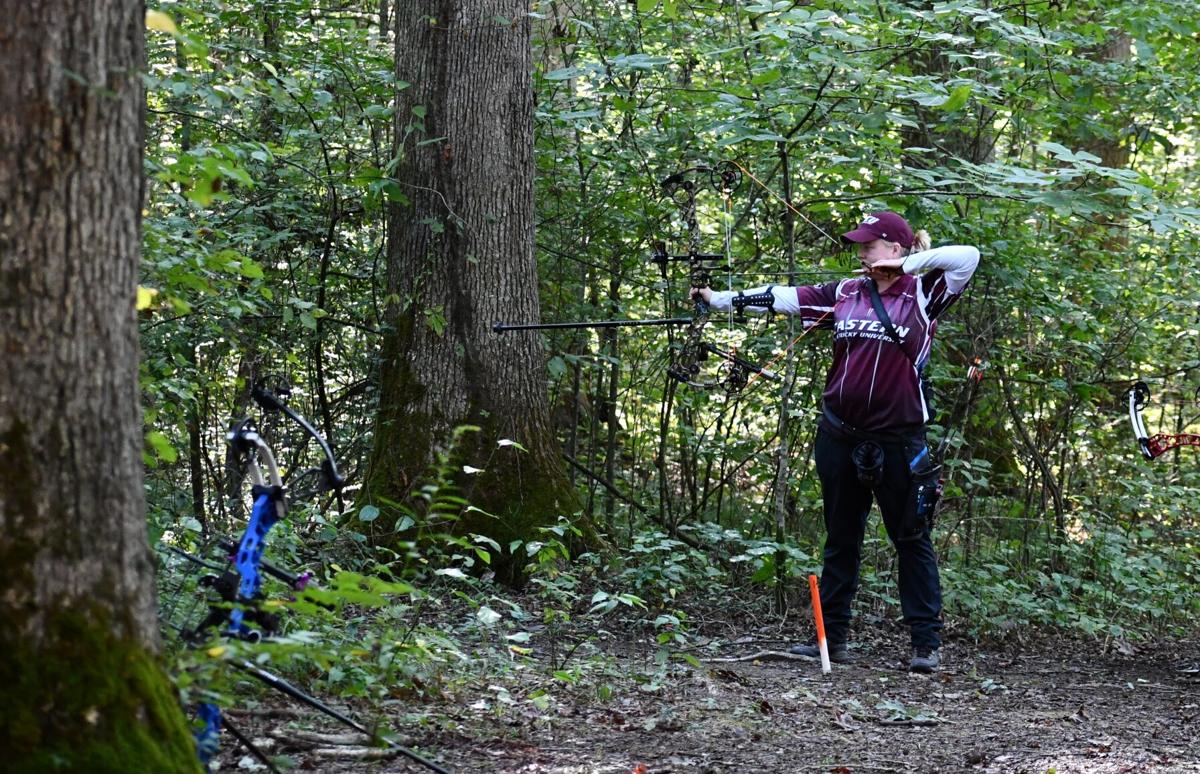 Junior piano performance major from Louisville Sophie Kleinman aims her bow toward the target during the 2021 USA Archery 3D Collegiate Regional-Southeast tournament on Sept. 24 in London, Kentucky. Each archer completed twenty rounds of shooting during the morning session. 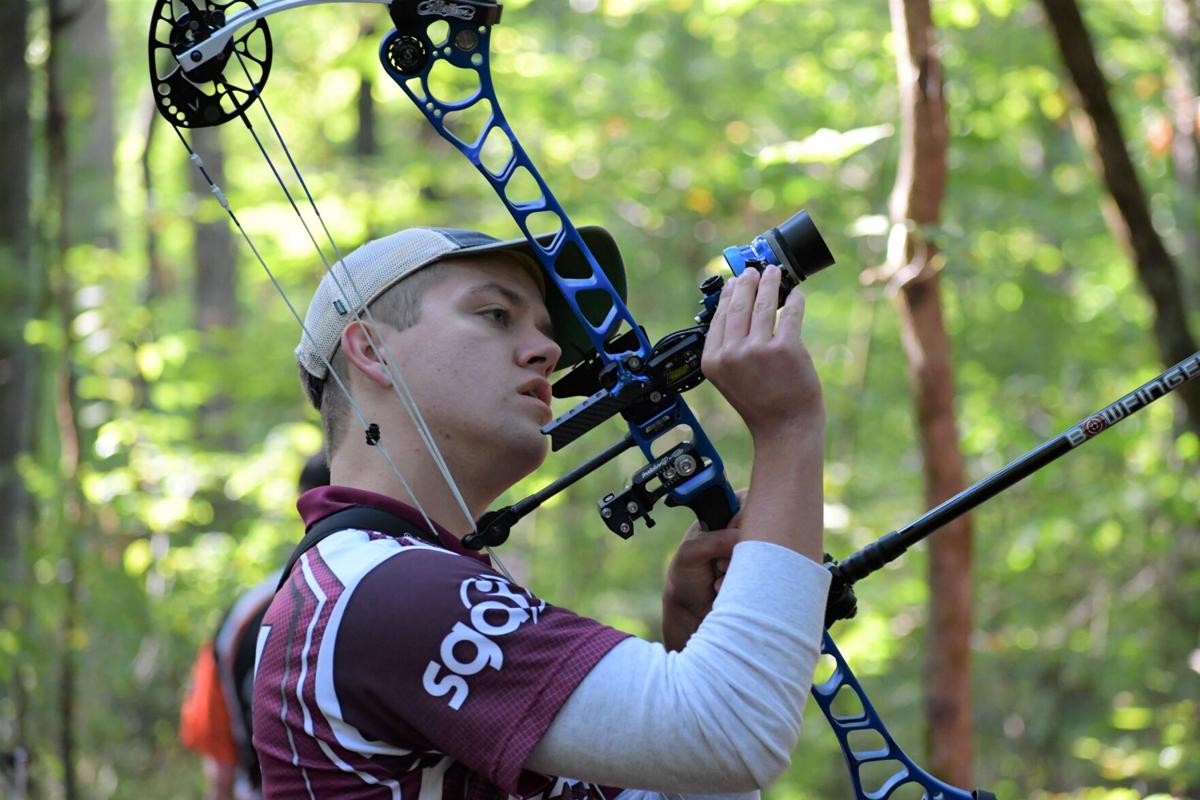 Senior statistics major Joshua Smith adjusts his sight before a shot at the 2021 USA Archery 3D Collegiate Regional-Southeast tournament on Sept. 24 in London, Kentucky. Archers adjusted the sight based on the distance and angle of each shot. 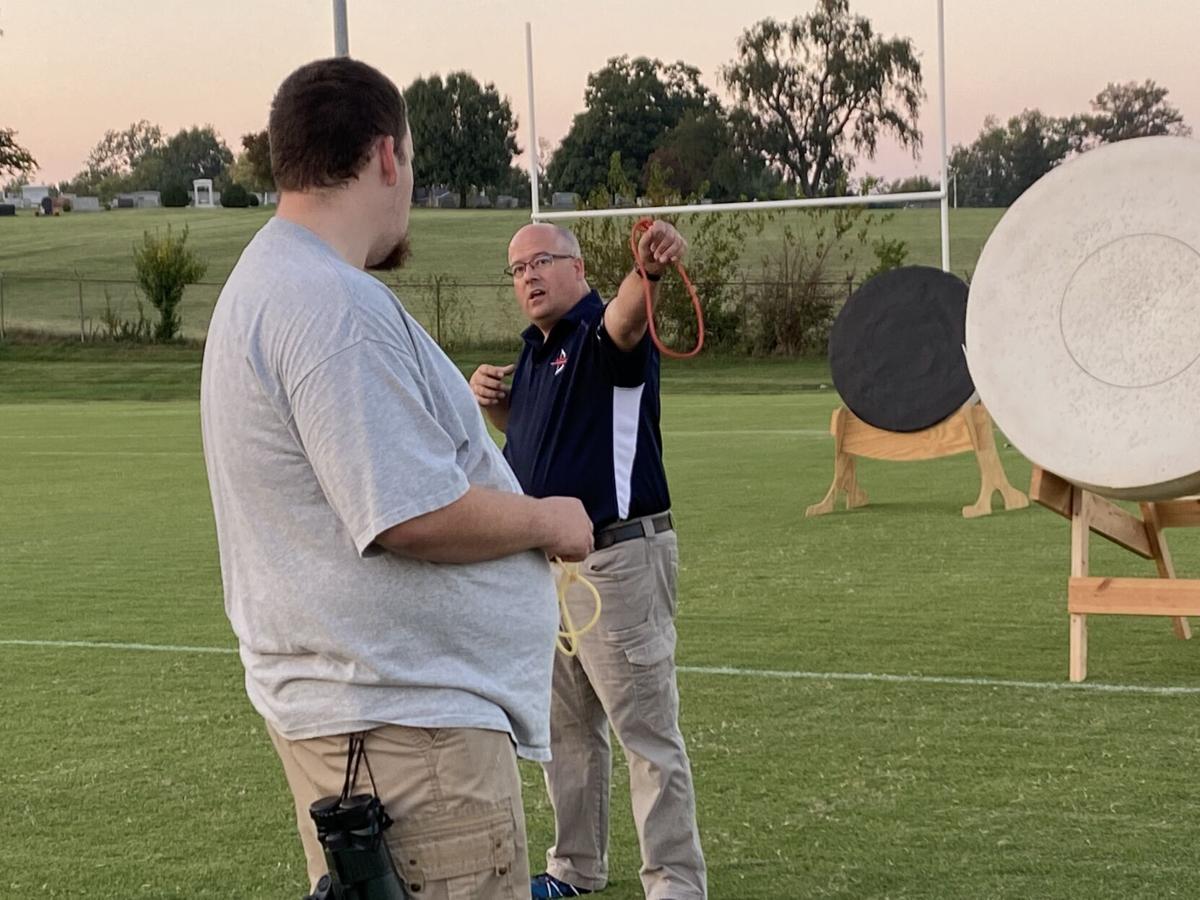 Isaiah Sparks, sophomore special education major from Olive Hill, watches as coach Shawn Smith demonstrates a drill at practice at EKU on Sept. 28. Archers worked on engaging their shoulder muscles during the drill.

Junior piano performance major from Louisville Sophie Kleinman aims her bow toward the target during the 2021 USA Archery 3D Collegiate Regional-Southeast tournament on Sept. 24 in London, Kentucky. Each archer completed twenty rounds of shooting during the morning session.

Senior statistics major Joshua Smith adjusts his sight before a shot at the 2021 USA Archery 3D Collegiate Regional-Southeast tournament on Sept. 24 in London, Kentucky. Archers adjusted the sight based on the distance and angle of each shot.

Isaiah Sparks, sophomore special education major from Olive Hill, watches as coach Shawn Smith demonstrates a drill at practice at EKU on Sept. 28. Archers worked on engaging their shoulder muscles during the drill.

Students at Eastern Kentucky University can participate in a wide variety of extracurriculars. Whether that is an academic organization or a club sport, each student can find something that piques their interest. For those interested in club sports, one option is archery.

The EKU archery club was founded a few decades ago, though the exact date is unknown. EKU archery club coach Shawn Smith joined the team three years ago. His son, Josh, was going into his sophomore year when USA Archery took over the governmental organization of college clubs and competitions.

USA Archery required each club team to have a trained coach to supervise and legitimize the competition level of the club. Smith went through training and stepped into the coaching role, so his son could continue competing.

“I was kind of like the only one around. I said if nobody jumps in there and takes that responsibility, I’ll do it,” said Smith. “It’s a lot of work but I enjoy it. It’s very rewarding teaching it and seeing people improve and grow.”

During the fall, the team competes in 3D archery, which involves shooting at foam animals. Once the 3D season ends in October, indoor archery begins around January. Indoor archery is held at 18 meters (20 yards) and archers shoot at a target. The indoor season ends around March, and the outdoor season follows in the spring. Outdoor shooting consists of long-distance shooting at targets.

Smith said indoor archery seems to be the easiest of the three seasons, but it is actually the most difficult.

Recurve bows are used for the barebow and Olympic recurve divisions. Barebow does not use sights, pins or adjustments to aid in shooting. In the Barebow division, shooters aim with the tip of the arrow. Olympic recurve allows for bells and whistles on the recurve bow and is similar to the open compound division.

One of EKU’s latest archery accomplishments came during the outdoor national championship last spring in Richmond, Virginia. The tournament featured teams from around the country, including the University of Texas and Texas A&M University. The mixed team of Sophie Kleinman, junior piano performance major from Louisville, and Josh Smith, senior statistics major from Richmond, placed third at the tournament. Smith said the pair “turned some heads” in what he called a “David and Goliath” moment.

“It’s been a huge boost of confidence, not just for them but kind of for the whole program,” Smith said.

EKU archery club president Jacob Holtzclaw hopes to build on the team’s success this season. One of his goals is to make a name for EKU, for himself, and the whole team.

“Instead of people wondering who we are in these maroon jerseys, they say, ‘Oh man EKU’s here.’ That is the goal and that is what I’m going to try to do for the rest of my time here at Eastern,” Holtzclaw said.

Holtzclaw, sophomore broadcasting and electronic media major from Stanford, began his archery career in the fourth grade with the National Archery in the Schools Program (NASP). His father made him join an extracurricular and the only two left were archery and academic club. The rule remained the same each year, and Holtzclaw eventually grew to enjoy the sport.

“I fell in love with it, really. When you get in high school, you start getting a little bit more competitive, and so it became just something like a habit, like, ‘Oh, I got to go to practice now,’ and I was one of the few that decided I’m going to do this in college, and Eastern had the majors for me and also an archery club, so I joined my first year and I’ve been here since,” Holtzclaw said.

Holtzclaw has only competed in two collegiate tournaments due to COVID-19 and scheduling conflicts. At the latest 3D tournament on Sept. 24 in London, he shot a 368 out of 400 in the men’s bowhunter division. Holtzclaw said he is willing to shoot any style Smith asks him to do, but his favorite is 3D.

“I like 3D targets, especially unknown distance. I like to judge my own distance and not have anybody tell me what it is, so I really think it boils down to how well you can shoot your bow and how well you can judge distance. I think it’s cheating if you get told what the distance is. I don’t think you’re that much of an archer if you get told what distance it is,” Holtzclaw said.

Holtzclaw is one of 15 EKU archery club members. Smith said as many as two dozen have shown up at practices, but equipment restraints and scheduling conflicts have limited the number of participants. Smith said he wants more people to join the team because archery is for all kinds of people.

“You don’t have to be like these guys and girls that have participated in lots of physical sports, you know. It’s very inclusive, very open to many people, different types of people, and we love that and we like to take pride in that,” Smith said. “We want people to experience archery and how fun it is, how enriching it is, mentally, physically, socially. It’s a very sociable sport.”

For those interested in joining the EKU archery club, visit their Engage page at https://eku.campuslabs.com/engage/organization/archery-club-at-eku. Students can also email, call, or message the team on social media for more information.