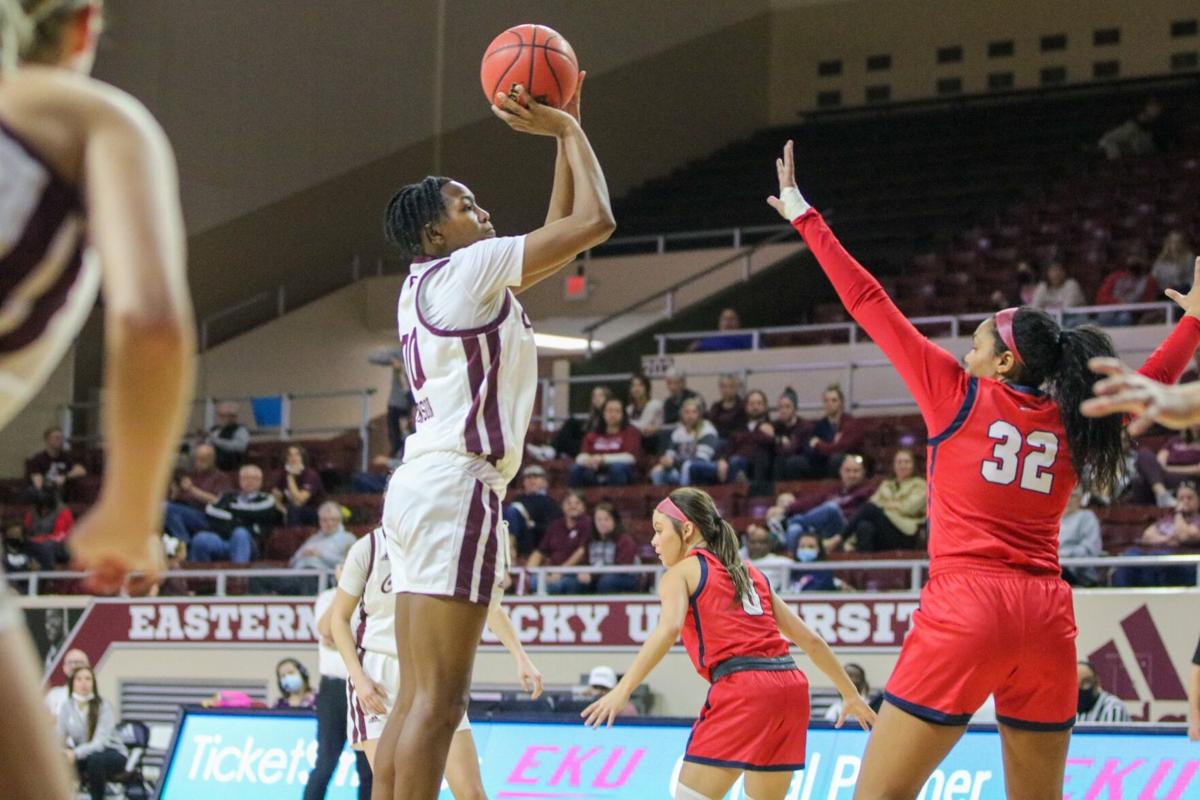 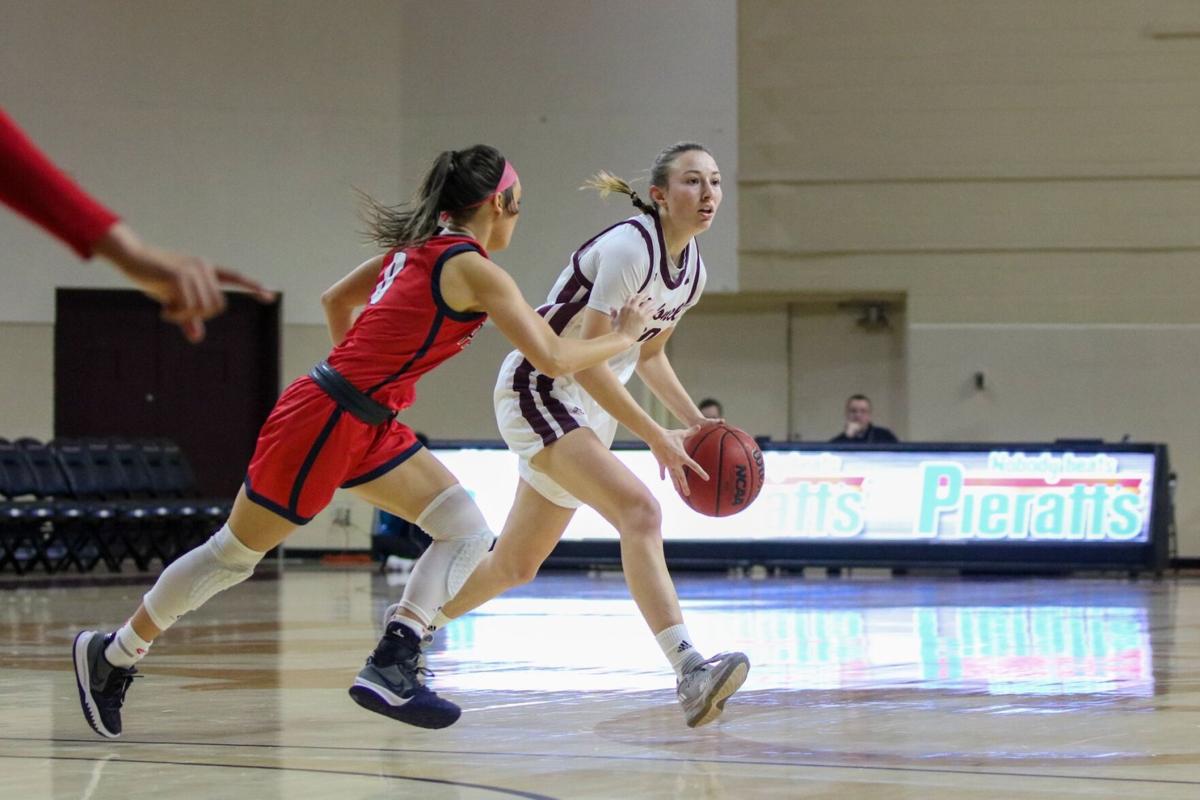 Alice Recanati looks for an open teammate against Cumberlands on Friday, Dec. 31. Recanati recorded seven assists to go with her 15 points. The Colonels pulled away with a 79-72 win. 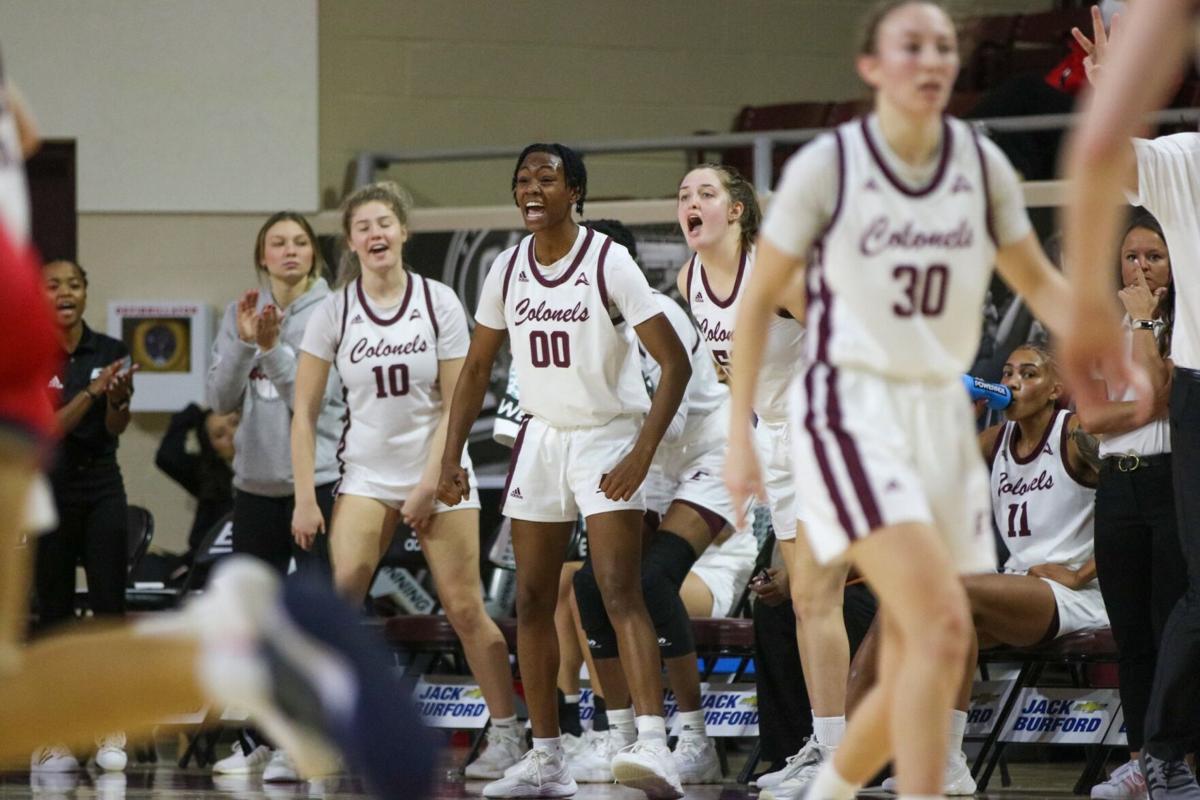 The EKU bench cheers on their teammates against Cumberlands on Friday, Dec. 31 at McBrayer Arena. Eastern Kentucky rallied from an early deficit and held off the Cumberlands down the stretch for a 79-72 victory.

Alice Recanati looks for an open teammate against Cumberlands on Friday, Dec. 31. Recanati recorded seven assists to go with her 15 points. The Colonels pulled away with a 79-72 win.

The EKU bench cheers on their teammates against Cumberlands on Friday, Dec. 31 at McBrayer Arena. Eastern Kentucky rallied from an early deficit and held off the Cumberlands down the stretch for a 79-72 victory.

The Eastern Kentucky University women’s basketball team rallied with a combined 53 points from seniors Bria Bass and Jayla Johnson on Friday afternoon to pick up the 79-72 win over Cumberlands.

“I thought offensively we looked a little bit better at times,” EKU head coach Greg Todd said. “We did some good things. We were led by our two seniors Bria Bass and Jayla Johnson… It was a game in which we had to dig in and play very hard and we were fortunate to come out with a win.”

The Colonels came out to a slow start against the Patriots after having nine days off for Christmas break. EKU trailed early, 18-10 in the first quarter but out-scored Cumberlands, 32-19 in the second quarter to take a 42-37 lead into the locker room.

“Great second quarter,” Todd said. “32 points is I’m sure one of our top quarters of the year so we did some great things offensively.”

In the second quarter, Bass scored 11 consecutive points for EKU and poured in 17 points in the period. Bass's fifth consecutive basket ignited a 15-0 EKU run leading into halftime.

“Once I hit the first shot the energy just kept going… my teammates kept feeding me the ball so without them it wouldn't have been possible to have 26 points tonight,” Bass said.

Heading into halftime, Bass said she didn’t realize she had already scored 19 points until her teammates mentioned it to her.

“I really wasn’t even paying attention like I try not to focus on it that much and just play,” Bass said.

Bass said her connection with Johnson on the court showed on Friday in front of the home crowd.

“I love playing with Jayla,” Bass said. “Since we played a year together we felt each other out and know how each other play.”

Alice Recanati found her teammates and recorded seven assists to go with her 15 points.

Todd was pleased that his team was able to limit the turnovers to only 11 while forcing the Patriots into 14 turnovers. The Colonels scored 14 points off turnovers and 38 points in the paint.

Bass said rallying from an early deficit and picking up a close win shows that the team has a lot of fight.

“I feel like with this young team under coach Todd’s administration and as well as the new assistant coaches we’ve learned how to adapt and overcome adversity,” Bass said. “It’s like we’ll get hit in the mouth but it’s not like we’re going to roll over… We’re going to keep coming and eventually we’re going to win.”

With the victory, Eastern Kentucky improves its record to 7-6 and caps off 2021 on a three game winning streak. The Colonels are also ending their non-conference slate with the first winning record since 2015.

“I think we are playing our best basketball right now,” Todd said. “We feel like we match up well in the ASUN and we’re very excited about it (starting conference play).”

The Colonels will begin ASUN Conference play on Wednesday, Jan. 5 when they host Central Arkansas at McBrayer Arena. Tip-off is set for 7 p.m.