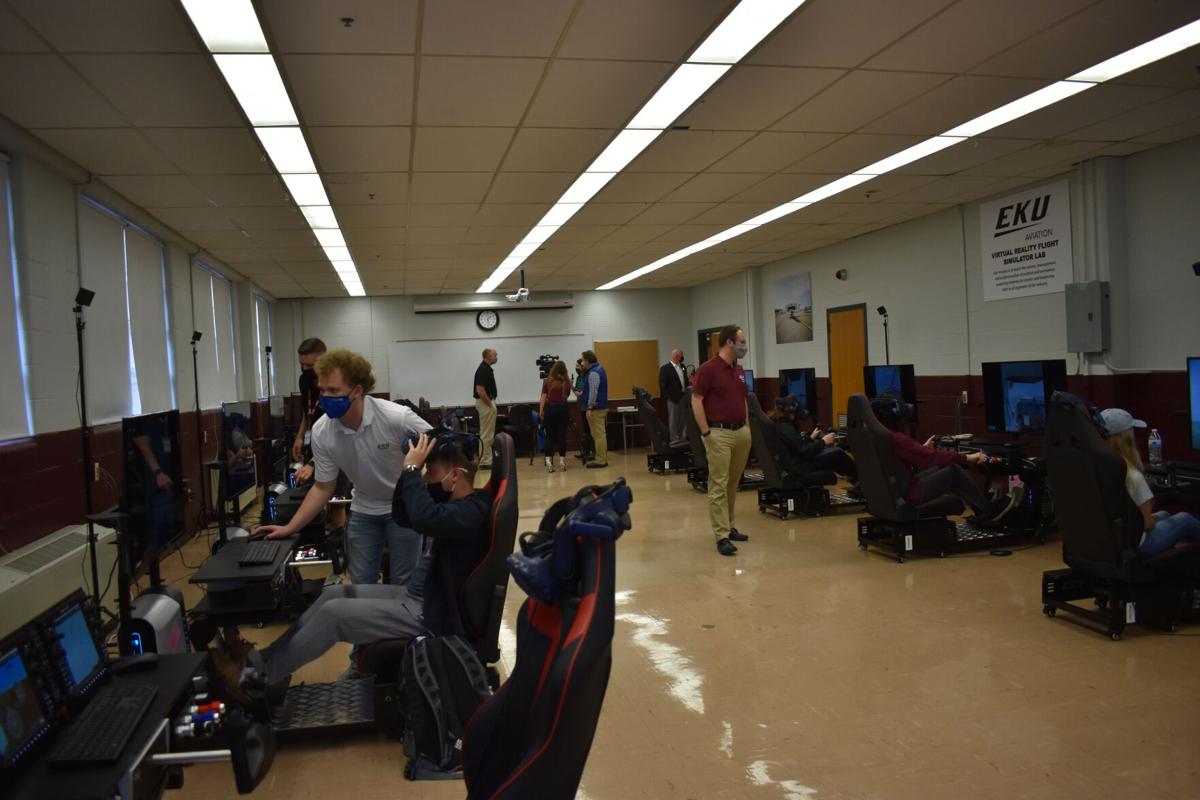 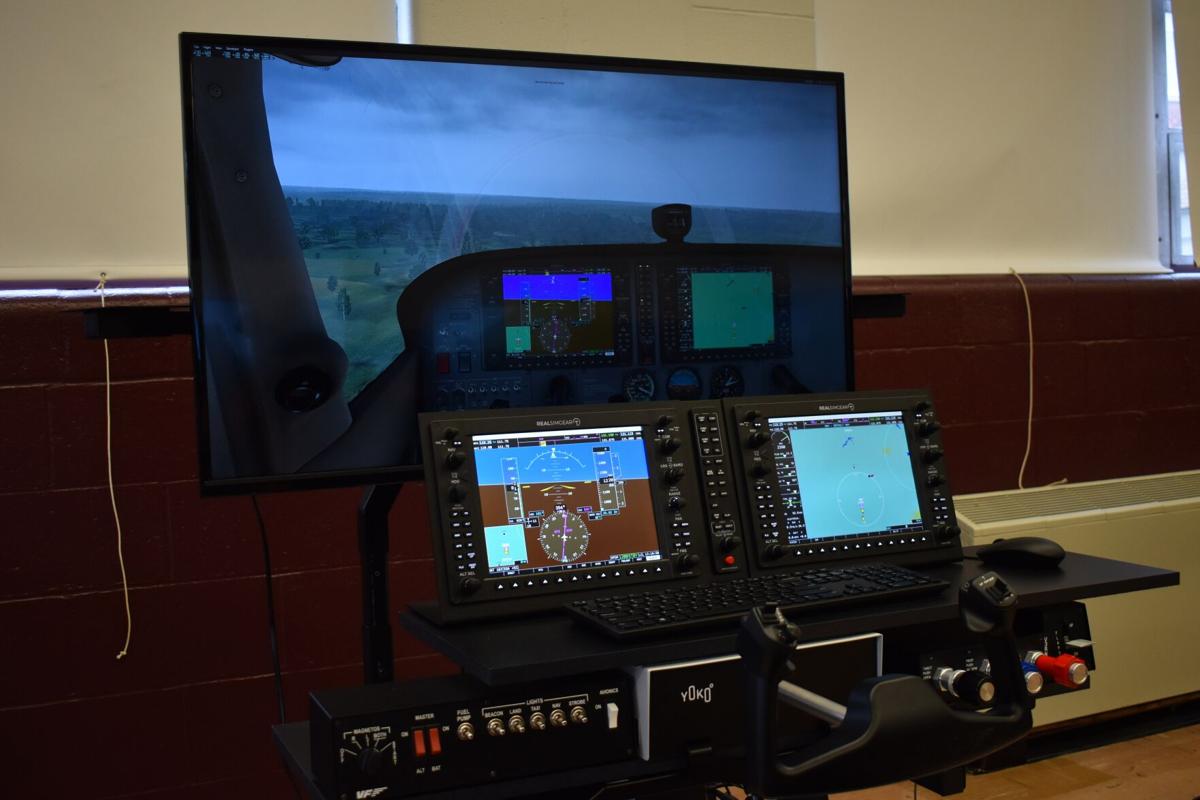 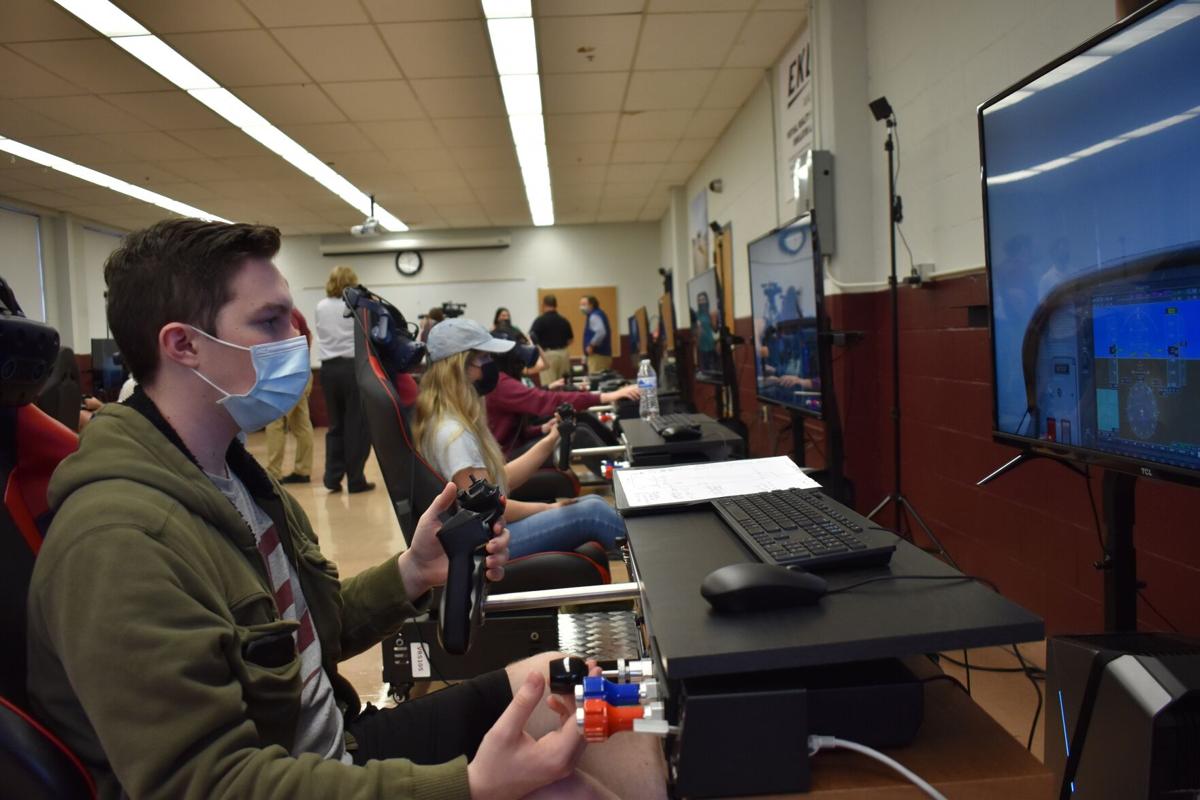 EKU Aviation students interact with each other's aircrafts within the shared server between simulators. 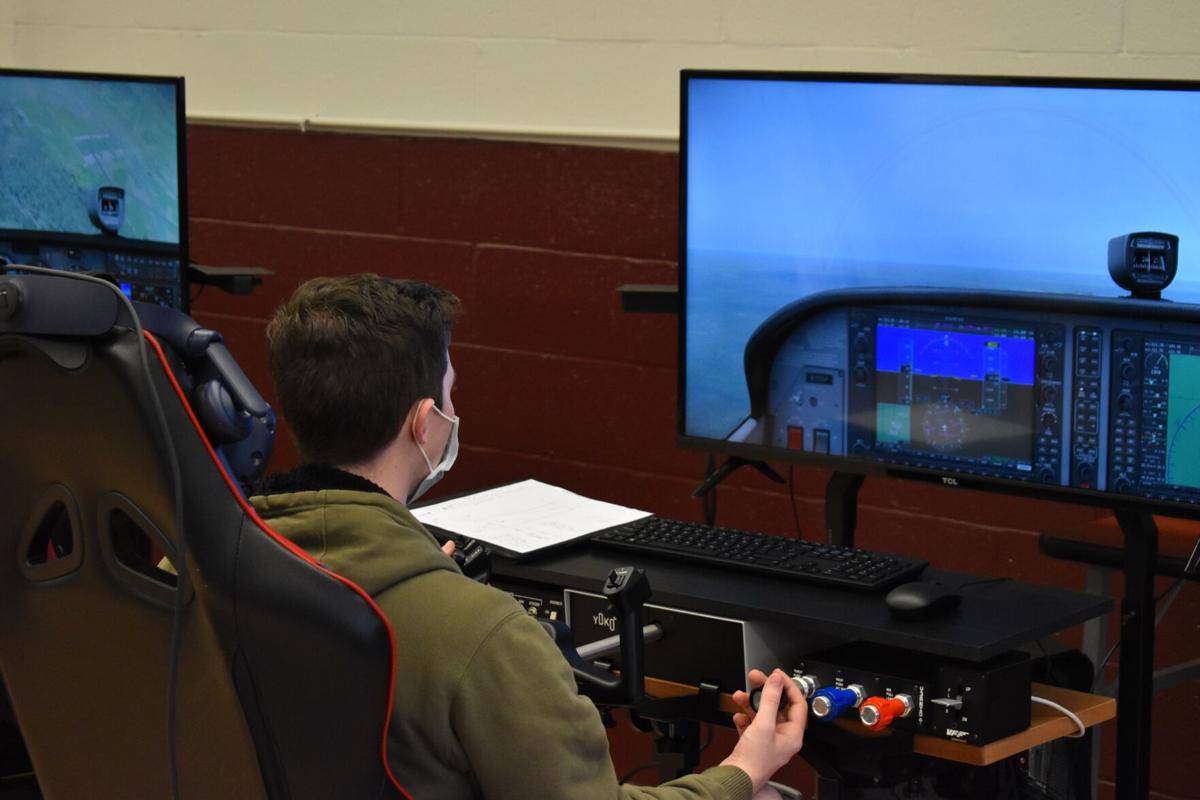 Foggy weather simulations can help students who are practicing for their Instrumental ratings. 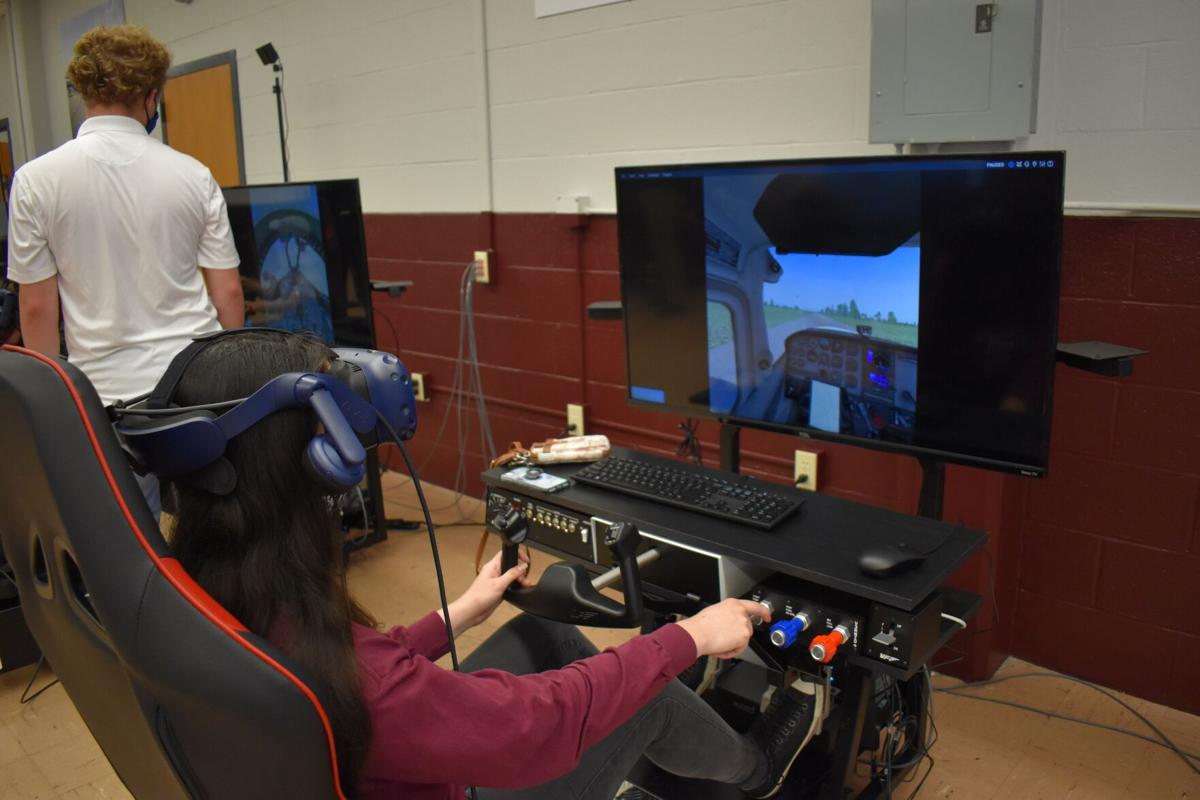 Kendra Butler, a Junior Professional Flight/Aerospace Management student, uses the VR simulation to train for her next license rating. 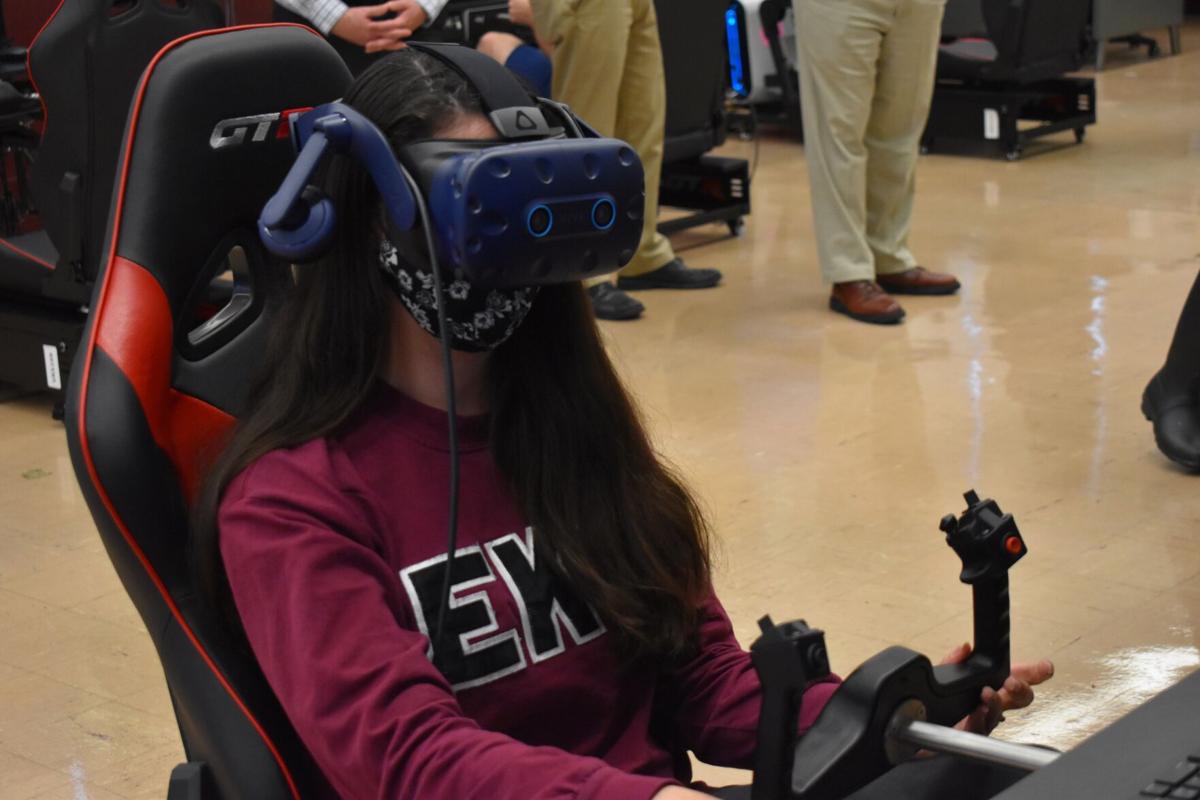 Kendra Butler flies a plane within the HTC Vive setup rigged in conjunction with X-Plane 11. 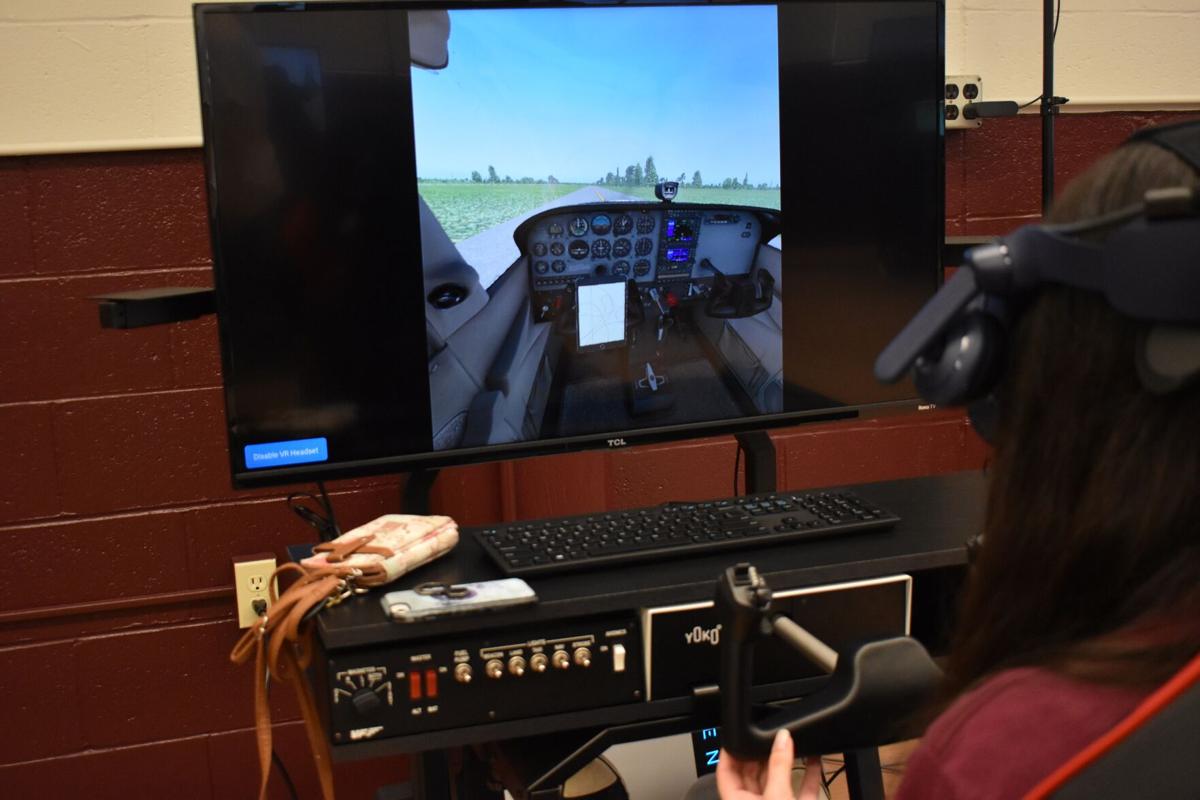 EKU Aviation students interact with each other's aircrafts within the shared server between simulators.

Foggy weather simulations can help students who are practicing for their Instrumental ratings.

Kendra Butler, a Junior Professional Flight/Aerospace Management student, uses the VR simulation to train for her next license rating.

Kendra Butler flies a plane within the HTC Vive setup rigged in conjunction with X-Plane 11.

On Thursday, April 27, I went to campus for what I think was the third time all semester. Having been at home for so long, it was nice getting to walk around the area, just taking in the sights, breathing in the open air (albeit through a mask), and just generally enjoying myself. Then I went into the EKU Aviation department’s new flight simulator room and my day got like ten times cooler.

So the aviation department is one of the biggest draws that EKU has, which is understandable ‘cause flying is cool, right? I’m somewhat well versed in this, being a member of the EAA (Experimental Aviation Association) and helping out around the local airport for a lot of my childhood, but I’m not skilled enough to be able to identify all the pieces of the inside of a cockpit, or read the instruments that fills it. However, I AM knowledgeable enough to quantify just how realistic the setups that EKU has are, which is to say: very. There are 12 new simulation setups, each with a large 4K+ monitor and an HTC Vive for VR training, professional grade GTR seats made for racecars and luxury vehicles, Alienware computers running X-Plane 11, an FAA approved flight simulator that can be used as hours for gaining your certifications, and a frame complete with full replications of the instruments, pedals, and interactable bits present in a normal aircraft. Suffice to say, they went all in.

“Stephen Crump deserves all the credit for putting this all together,” said Dennis Sinnett, executive director of the aviation department. “We’re obviously very passionate about it, but he put in the time and built all this himself.”

Crump, the department’s resident IT engineer, ran me through how the machines were constructed and what plans for them were. The VR setups and PCs were interconnected on a single server, so when students were using the sims they appeared on each other’s instruments and horizons. The TVs and GTR seats were mounted to an adjustable frame that could be fitted to the student’s body size, and the department is planning on adding air traffic control simulation at some point in the near future. All costs accounted for, the setups cost about $5,000 to $6,000 each.

Luckily, it seems as though the students find the simulators to be worth the cost. I spoke with Kendra Butler, a junior majoring in professional flight and aerospace management, and she not only found the sims helpful, but encouraged other students to come try them in between classes if they were at all interested in the department. Of course, she was happy to talk about other aspects of introducing students to the program as well.

“Try a discovery flight, you know?” she said. “See if it’s something that interests you.”

Butler herself was a fellow EAA member, as well as EKU’s treasurer for Women In Aviation, and she is currently pursuing her instrumental rating having already obtained her private pilot’s license.

Wandering around the room, I got one of the professors present, James Glass, to explain some of the benefits of the simulations as opposed to simply doing IRL training, and he had a fairly substantial list. Students could alleviate nervousness, increase efficiency, practice takeoff and landing using a preset teaching program called GLEIM, use instructional and corrective overlays while they flew, and get help from multiple instructors. Behind his words, there was a sense of pride that I was beginning to get the feeling permeated throughout the entire department. These setups weren’t just impressive to an outsider, they were exemplary for everyone involved.

To see if I could get some quantification behind the pride I felt from everyone, I caught back up with Sinnett, and asked him about the department as a whole, and he was more than happy to share. Since he started working for EKU four years prior, the student population of the program had doubled, a 100 percent increase, which he said is the solution to the problem of older airlines and shipping companies losing their older pilots.

“Who’s gonna fill those cockpits?” he asks rhetorically. The answer is all around us, in the quite frankly packed room bustling with all the energy of an actual airport. He grinned as he gestures to all the other staff members. “Come to our program. Like I said, we’re obviously very passionate about it.”