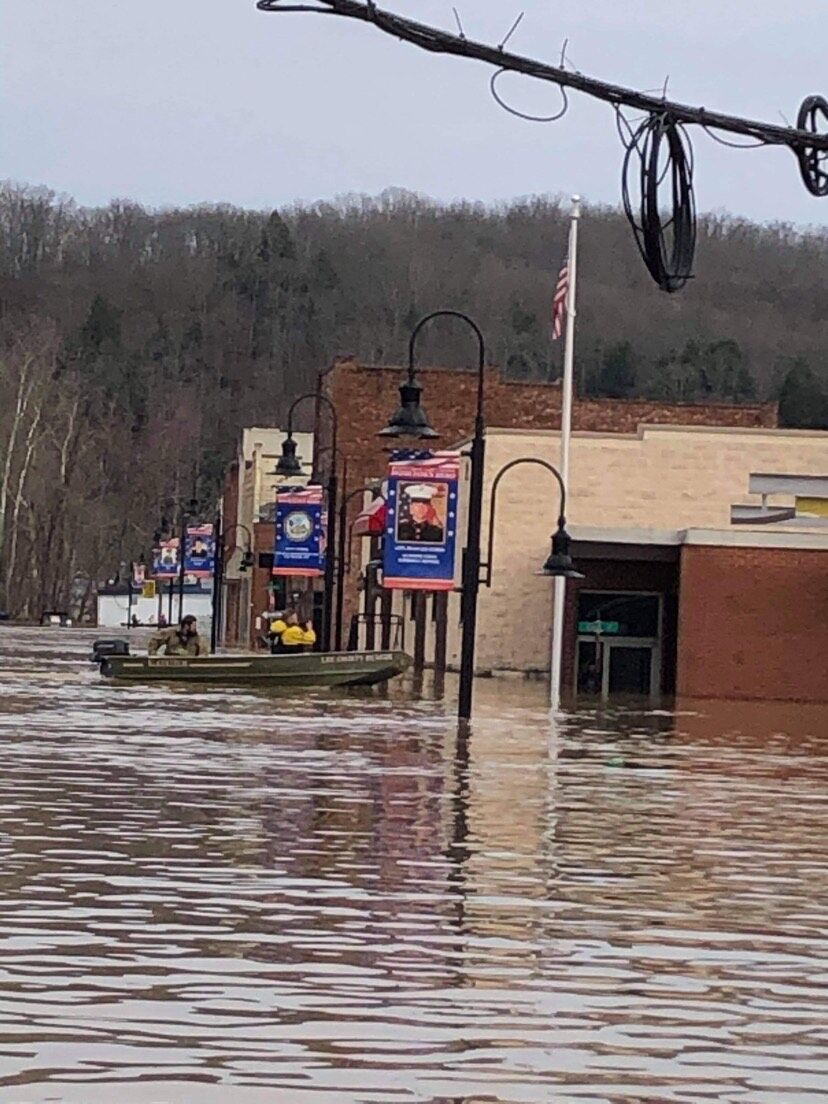 Volunteers and Beattyville citizens move along flooded streets in motorboats. 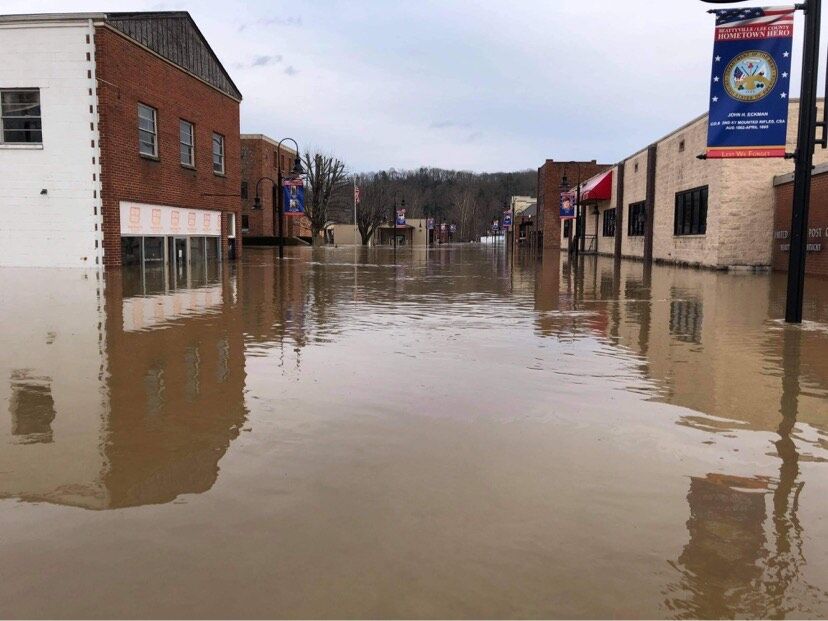 Businesses in the Red River Gorge area are completely submerged in water following the flood. 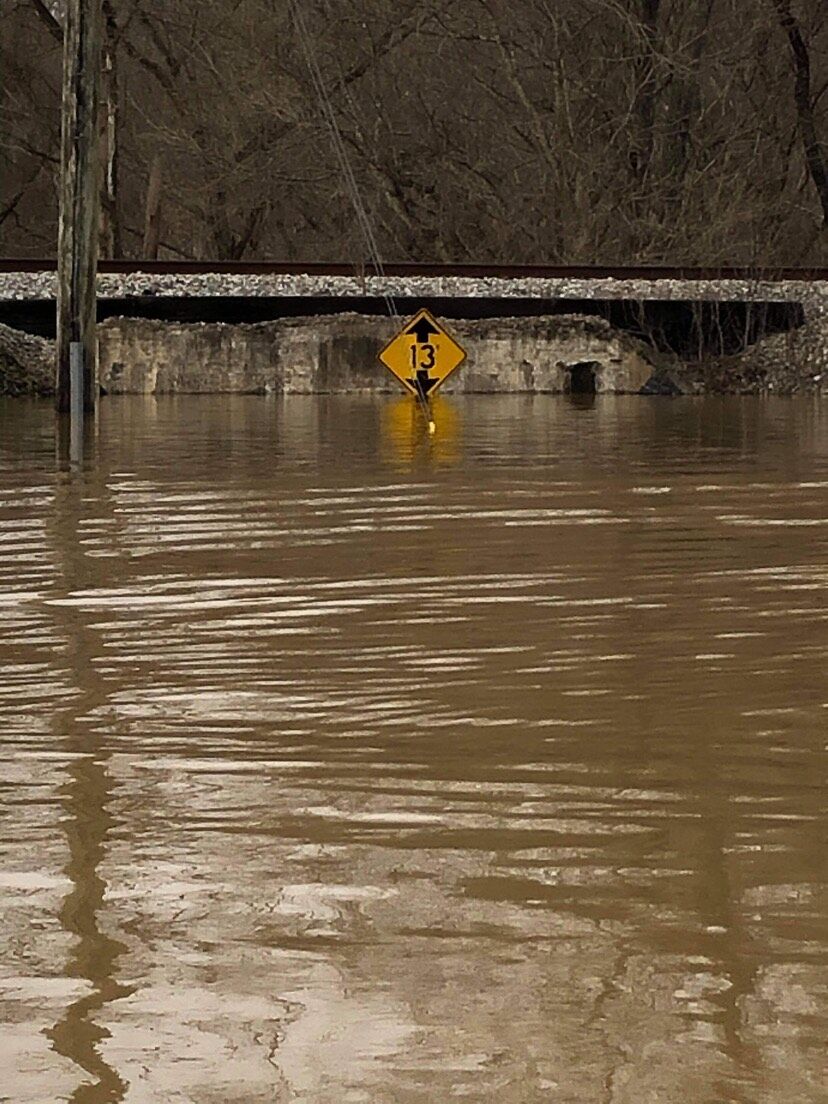 A sign indicates the depth of the flood water, at almost 13 feet over ground level.

Volunteers and Beattyville citizens move along flooded streets in motorboats.

Businesses in the Red River Gorge area are completely submerged in water following the flood.

A sign indicates the depth of the flood water, at almost 13 feet over ground level.

A couple weeks ago, America was hit with some of the worst ice storms in recent history, with power outages all the way from Texas to Kentucky. I live in Jackson County, about half an hour’s drive south from EKU, and we were hit pretty bad. No power, no cell service, no internet access, and no water for a full week. My family relocated to a hotel in Richmond for a couple days on the tail end of the storm, taking our dog and turtle along with us. At the hotel, I talked with a friend of mine in Richmond whose house had been hit just as hard, but in a different way. All the kitchen appliances in their house had been fried, and the car wouldn’t leave the garage. At the time, I thought to myself that I had never bore witness to such a natural disaster in Kentucky. This was the first flaw in my mentality.

When I started planning for this article, I was going to write about the struggles of being without power, of dealing with heavy snows, and touch briefly on the recent floods that had occurred a couple nights ago. I mean, my own basement had a centimeter of water in the side room, so I was qualified to talk about it, right? My Editor-in-Chief put me into contact with another Broadcasting and Electronic Media major at the university, Jacob Broadwell, who had also suffered damages from the flood. I thought I would get a couple quotes, add them alongside my own thoughts, and get the piece written in an afternoon. So, I got his number, scheduled a time to talk, and then sat down to interview him.

I was not mentally prepared for the conversation that followed.

“My entire hometown was destroyed,” Broadwell said starting out, “and I’m very emotional when I talk about this because the first thing I ever loved in my life was my hometown, and when you have nothing you better be damn proud of that nothing.”

What I had initially thought to be a short interview to get some supplemental quotes for a story turned into a 20 minute conversation in which Broadwell explained to me the level at which the damages to Beattyville were, the people who were affected by it, how the town had a history of being overlooked and looked down upon… It was becoming increasingly apparent to me that not only was I speaking to someone who was well educated on their hometown’s history, far more than I ever had been, but also someone who was proud of the community that was so frequently shafted by the rest of society.

Broadwell also told me about the different ways his community had rallied together, making sure to focus on how they had evacuated a lot of people out of Lower Creek and banded together over their collected losses, though even with no casualties or missing persons the event was still a catastrophe. A large number of businesses were completely destroyed, some buildings were almost totally submerged. The runoff from the river shaped new ruts and scars through the ground in the surrounding areas, and citizens patrolled the streets in motorboats several feet above the roads.

In the face of all this destruction and harsh weather, Broadwell told me of some efforts that had been made to supply funding for food, temporary housing, gas, and other necessities for the people in the Red River Gorge area, and he had great appreciation for those who had donated to the cause, but he had some choice words for those who looked down upon the area.

“I appreciate people who are donating,” he said. “I appreciate the people who are spreading the message and the photos that my brother took of my hometown, and I am very, very, VERY grateful that people are finally paying attention. I just wish people would actually talk to us, so we can get our input on things. [...] Do not turn your nose up at these people. If you’re gonna turn your nose up at us because of how I talk, because I say ‘warsh’, but the second that my town floods you’re gonna go on Instagram and I see you post, ‘Relief this, flood that’⎯talk to us.”

I asked him if he had any particular things he wanted address, and he once more spoke to the people who would ordinarily dismiss the Red River Gorge area.

“We are your fellow Kentuckians. When you look at us, don’t come in with these preconceptions. When people look at us when we say we need relief, I’m not gonna forget the times you looked down on me because I said I was from eastern Kentucky. I don’t want people to have these notions about who we are, you don’t know who we are because you don’t talk to us. I’m tired [of it], and I’m gonna fight. I don’t wanna see my town disappear. I don’t wanna see it flood again, and I don’t wanna see them struggle anymore. So I am willing to talk to people about how we can fix it," he said.

After I had finished my conversation with Broadwell, I sat at my computer for a good long while, still absorbing everything he had described. I had looked up the relief efforts, seen the pictures of the flooded town his brother Josh had taken, and labelled a blank page with the title of the interview, so taken aback by the sheer emotional drive behind his words that I was rethinking the entire premise and structure of the story, unclear on where to start. My phone buzzed in my pocket, and I reached down to check the notifications. I had gotten a text from Jacob.

“Here’s a quote for you,” it read. “I’m just frustrated that it took a once-in-a-lifetime disaster for people to actually care about Beattyville.”

If you’re interested in donating to help the residents of the Red River Gorge area, please feel free to visit https://gofund.me/897c50a3. All efforts to help are appreciated.