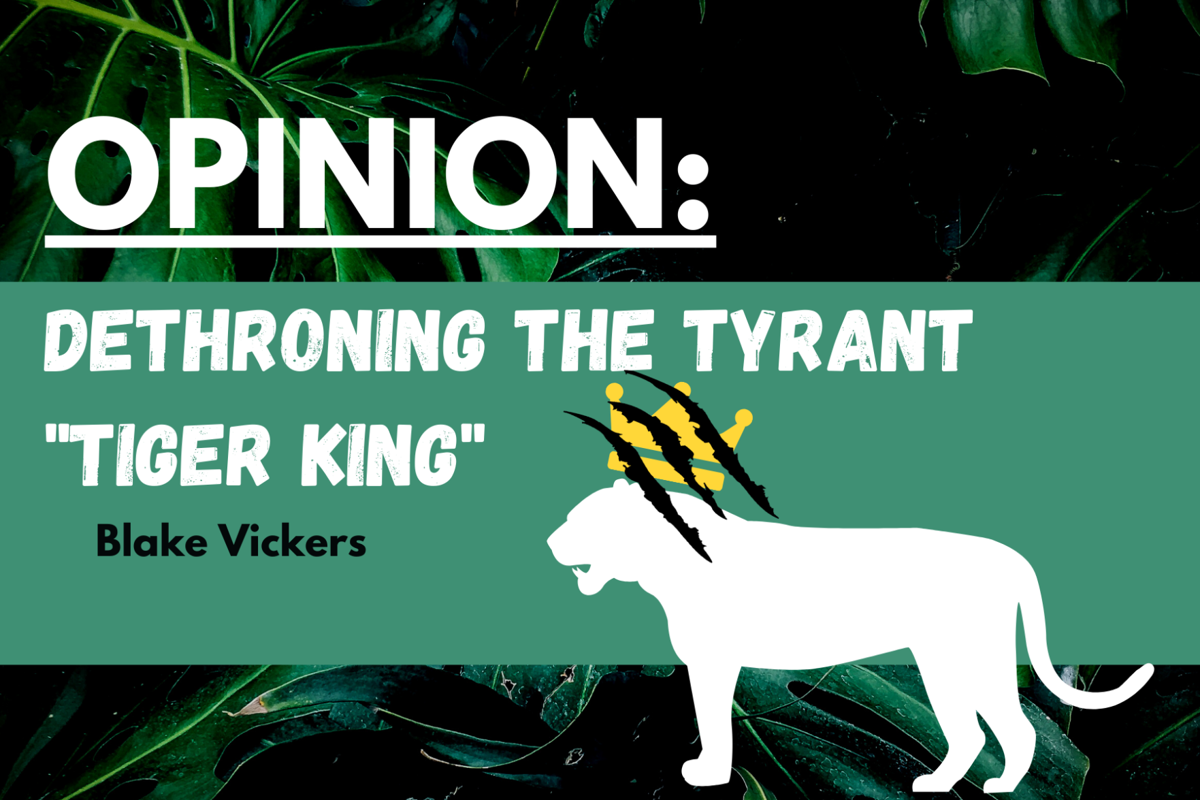 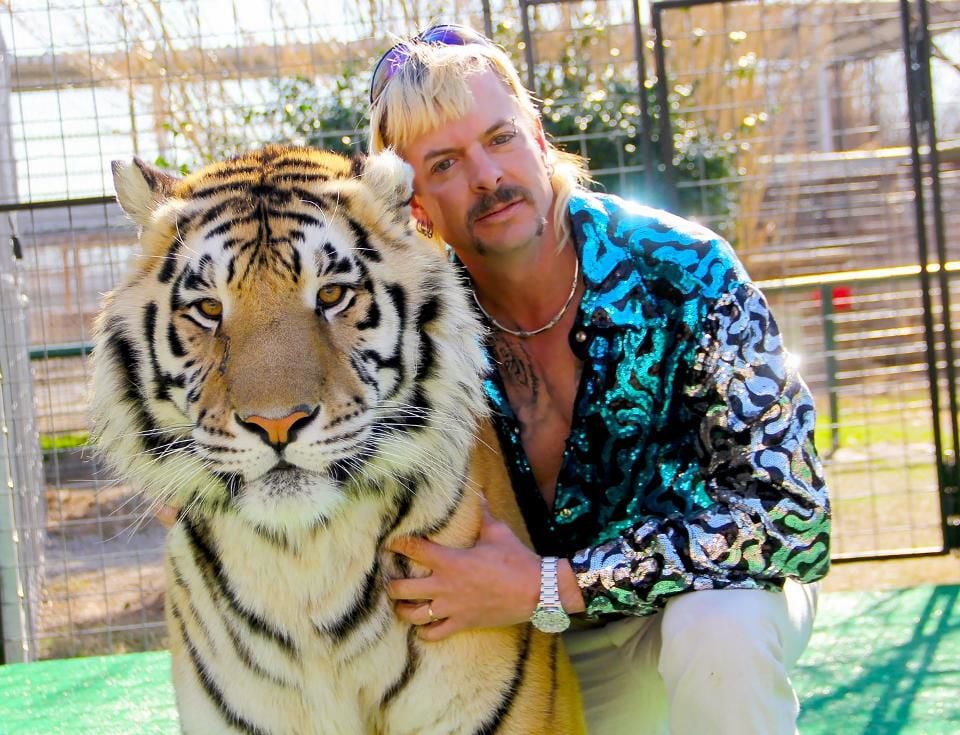 Joseph Allen Maldonado-Passage, aka Joe Exotic, poses with a tiger at his zoo.

Joseph Allen Maldonado-Passage, aka Joe Exotic, poses with a tiger at his zoo.

Joe Exotic is not your friend. He doesn’t deserve freedom or your sympathy.

Full spoilers for “Tiger King: Murder, Mayhem and Madness” below

I’m sure if you don’t know the story, you’re at least aware of it. Netflix’s documentary series, which follows the sordid adventures of Joe Exotic and his obsessive feud with fellow big cat advocate, Carole Baskin, has taken the world by storm. Joe Exotic is many things: big cat handler and breeder, zoo owner, polygamist, wannabe country star, magician and political candidate. He’s a flamboyant,gun-toting, gay man with enough charisma to earn him a sizable fan following— despite some truly abhorrent behavior.

While Joe himself may appear to be an obscenely charming man with some truly despicable enemies, he’s also something of a scumbag. And frankly, if you can finish the series and still have an inkling of sympathy for Joe, you need to watch it again or begin rethinking your life.

Travis Maldonado was one of Joe’s three husbands. He met Joe when he was just 19 years old, and already dealing with substance abuse problems. There’s a certain set of criteria for the men in Joe’s life. They’re usually straight, around 20-30 years his junior, and in the midst of meth addiction. I don’t know how anyone could watch the episode with Travis’ funeral and still think of Joe as a good guy. As Travis’ family and friends wept, Joe cavalierly spoke about his late husband’s “golden nuggets” before alluding to his political campaign and lip syncing to a song he pretended to write. Less than two months after giving that horrific eulogy, Joe remarried.

According to John Finlay, one of Joe’s other husbands at the time of the series, Joe would shower his lovers with gifts and enable their addictions in exchange for companionship. As a husband, Joe was manipulative and possessive, according to Finlay they were not allowed to leave the zoo. Any emotional distress this led to for Travis or John was responded to with Joe plying them with more drugs or guns.

It was an abusive cycle that led to what was ruled as an accidental suicide for Travis. Whether you think his death was accidental or not, it’s pretty clearly established that Travis was a clinically depressed addict, and Joe is at the very least an enabler that led to that outcome.

Carole Baskin and her husband are snobbish hypocrites. And, yes, Carole very likely could have played a hand in her ex-husband’s disappearance. For all her preaching about keeping lions and tigers out of cages, she does the exact same thing Joe Exotic does, minus the pageantry and breeding. She’s one of the most unlikeable people on the show, but she had every right to sue Joe into oblivion.

He harassed her at every turn and pulled some of the most demented pranks (if you could even call them that) imaginable. He, or one of his fans, allegedly stuffed live snakes in her mailbox, he openly threatened to kill Carole on several occasions, and he eventually tried to. If it were anyone but Carole was subjected to Joe’s lunacy, people would want his head on a stake. Which leads to the answer of why Joe Exotic has become a sort of cult hero. Simply put, he’s the most charming and somewhat sympathetic member of a group of depraved miscreants and criminals.

Big cat people are insane. It’s stated at the very beginning of the very first episode of “Tiger King”, and is the main theme of the series. Doc Antle, another featured exotic animal owner, is a narcissistic leader of a sex cult targeting young women, who also euthanizes his animals by the boatload. Jeff Lowe is the human equivalent of a prophylactic vending machine found in a truck stop bathroom. Carole Baskin is Carole Baskin. It’s only because of Joe’s charisma and colorful personality (and the fact that he’s the main subject of the documentary) that he seems to be elevated above the irredeemable pieces of human refuse that he surrounds himself with.

For example, the fact that Jeff Lowe (another featured exotic pet owner) and the would be hitman Alan Glover, got off of scot-free in Joe’s murder-for-hire trial, despite playing key roles in planning it (Alan Glover literally agreed to kill Carole and accepted payment for the job), make Joe look that much more sympathetic. When he’s not.

If you are still in doubt, here’s a few other things the so-called “Tiger King” did. He left his animals in horrible conditions, and that’s to say nothing of the ones he used as livestock or shot in the head. He fed these endangered animals, and the workers at his zoo, and alledgedy customers at his short lived pizza restaurant, expired meat from Walmart. Financially speaking, he bled his elderly parents dry. He left his spouses drug addled and emotionally scarred or in caskets.

Cardi B briefly led efforts to raise funds to get him released, and the other day Trump mentioned he would look into pardoning him. While Joe has proven to be a source of entertainment and an avatar of sorts for the depressing and strange times we find ourselves in, he doesn’t deserve a pardon or any more of the fame that his Netflix series has given him. Joe Exotic doesn’t deserve his fame or your sympathy. But, if there truly is justice in the world, he shouldn’t be serving his sentence alone. Jeff Lowe and Alan Glover need to be sharing a cell with him. As for Doc Antle, Carole Baskin and every other scumbag on the show, there’s always season 2.