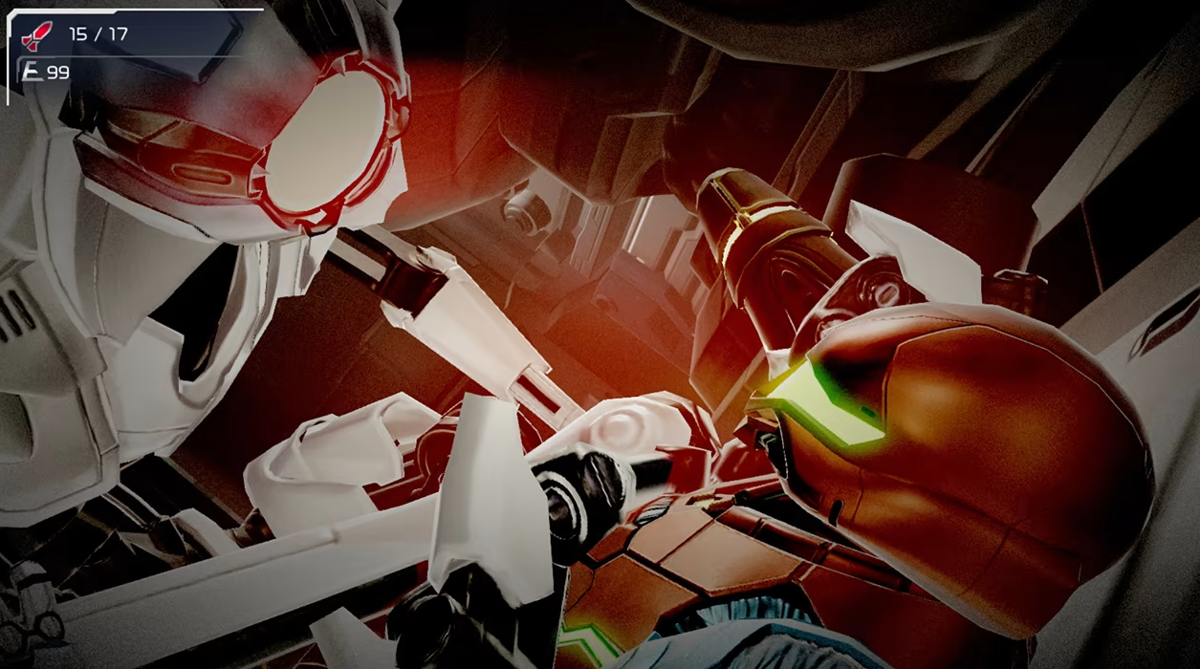 When caught by an E.M.M.I., Samus has two opportunities for a frame-perfect counter or it's instant game over. 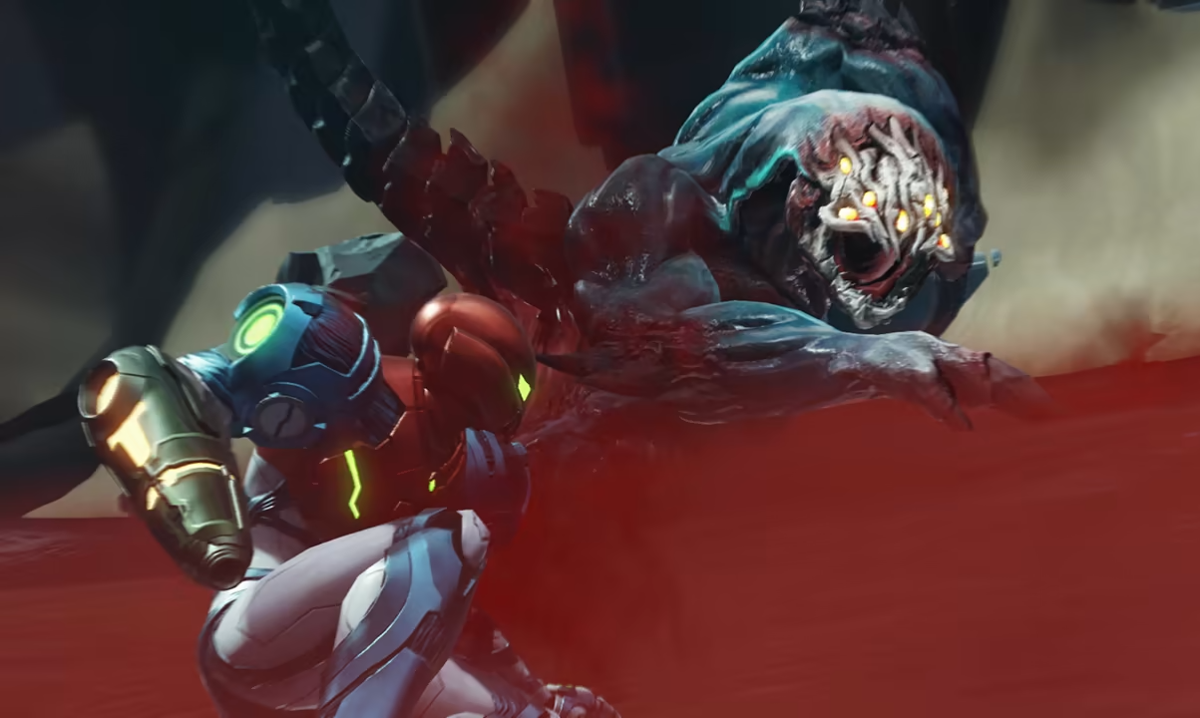 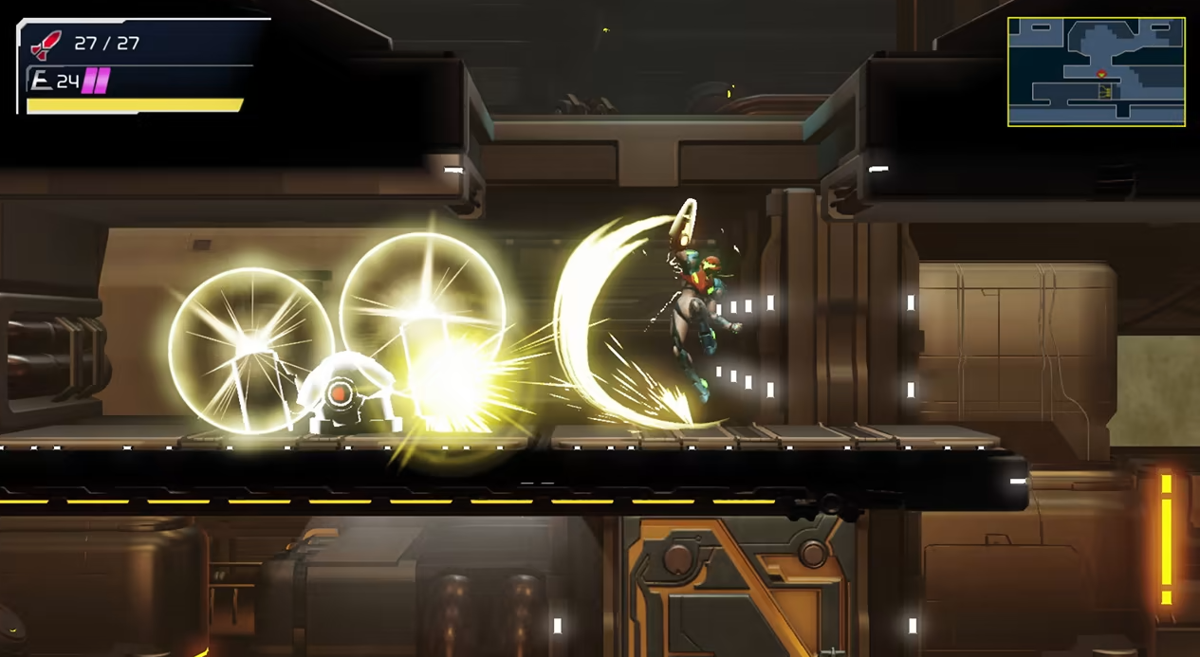 The melee counter and parry system from Samus Returns...returns. A well-timed countershot will instantly destroy most enemies Samus finds on ZDR.

When caught by an E.M.M.I., Samus has two opportunities for a frame-perfect counter or it's instant game over.

The melee counter and parry system from Samus Returns...returns. A well-timed countershot will instantly destroy most enemies Samus finds on ZDR.

I have a particular soft spot for games that came out during the Game Boy Advance era, but I’m not entirely sure why that is. I only ever first had the oppurtunity to play a lot of them through the Virtual Console titles on 3DS, which I got from being part of Nintendo’s ambassador program.

However, there’s something particularly charming about that era of gaming which has always spoken to me on some odd level. From Legend of Zelda: The Minish Cap to the Tales Of series, there was no shortage of action fantasy titles. From Fire Emblem: The Sacred Stones to Mother 3 and Advance Wars, there were an abundance of deep JRPGs to get invested in. The racing scene had F-Zero: Maximum Velocity and Mario Kart: Super Rush, fighting game players got a surprisingly in-depth port of Street Fighter Alpha 3, the visual novel scene popped off with the first Ace Attorney game, and then ... there was Metroid Fusion.

Metroid Fusion wasn’t the first Metroid game I ever played, nor anywhere close to being the first Metroidvania. However, it stood the test of time when I first got my hands on it in 2012, a full decade after it first released, and cemented itself at the top of the genre the series had created. For those unaware, the term “Metroidvania” refers to any game, usually 2D platformer, in which a significant part of the game’s exploration revolves around finding new items and abilities that allow the player access to more areas of the map, rewarding them for exploring and paying close attention to where they’ve been, and often requiring them to backtrack to areas they’ve previously cleared to use their newfound abilities to traverse previously unavailable routes.

It’s a methodical, rewarding, and extremely polished formula that lets players explore the limits of their capabilities to the fullest extent, and I love it. Metroid Fusion in particular was such a stand-out title for me because it gave me something that I never thought a 2D platformer would: fear. Fusion is a terrifying game, restricting the player’s sight as they traverse a corrupted space station and flee a predatory copy of themselves. The unsettling sound design, the grotesque enemy traits, the subtle changes in the background music giving way to sirens blaring as the player is put in danger, and finally some incredible art direction leads to a quite rational sense of fear and helplessness that is ultimately extremely satisfying to overcome. Fusion left such a high standard that it seemed Nintendo would never follow up on.

Well, they sure did just follow up on that.

Announced earlier this year during a standard Nintendo Direct, Metroid Dread is the fifth mainline entry in the classic franchise, and the first one since 2002. Developed internally by Mercury Steam, the studio who remade Metroid 2 for the 3DS, it serves as a direct sequel to the GBA’s Metroid Fusion in both story and atmosphere. As Samus, the player is thrust directly into the midst of Fusion’s aftermath and tasked to clean up the galaxy’s mess, leading her into a vast series of interconnected underground caverns with the grim remnants of a civilization setting the scene.

Pursued constantly by seven E.M.M.I. (Extraplanetary Multiform Mobile Identifier units), the threat of immediate death is almost always around the corner, but Dread doesn’t exactly play directly into that same feeling of helplessness that Fusion did. This time, there’s a more clear direction for Samus to go. Destroy all the E.M.M.I., return to her ship, and see to it that the dangers on the planet never reach the rest of civilization. It’s this sense of urgent purpose which makes Dread so impactful from a story and setting perspective, but just about every aspect of gameplay serves to highlight it to its fullest extent.

Dread features some returning mechanics from Mercury Steam’s Metroid 2 remake, like the introduction of a 360 degree aiming function, the ability to parry melee attacks, and an ability meter management system in Aeion. However, the game doesn’t rest on these laurels, and goes the extra mile to make Samus feel more responsive and connected with the world than ever before. Movement animations are fluid and human, with Samus resting her hands on walls when approaching the side of an area, or adjusting her center of gravity while climbing. Little details like this serve to make her feel much more alive, which the game does incredibly in lieu of Fusion’s more direct narrative storytelling. Samus’ fearful reactions to danger are visible even when you can’t see her face through her helmet’s visor, and the sense of strength and confidence she has when finishing a boss fight is equally pronounced. Every aspect of interactivity has been thought through with meticulous care and attention, and the result is a truly stunning, unnerving, and worthwhile work of art.

Now, all of this is not to say that the game is perfect and without issues. If anything, the game feels perfect when playing through it for the first time, but the nature of how the map is laid out makes backtracking for the sake of completion a chore that I fully realize not everyone is up for. However, even reaching that point is more than satisfying, making the $60 price point easily justifiable. Not only is the game one of the best that the Switch has to offer, it’s singlehandedly become one of my favorite Nintendo titles to date. The game isn’t just good enough to resurrect its own series, but also enough to resurrect this gaming column that I’ve left dormant for over a year now. I can absolutely say with 100% confidence that the follow-up to Fusion was more than worth the wait.

Back in the saddle again,