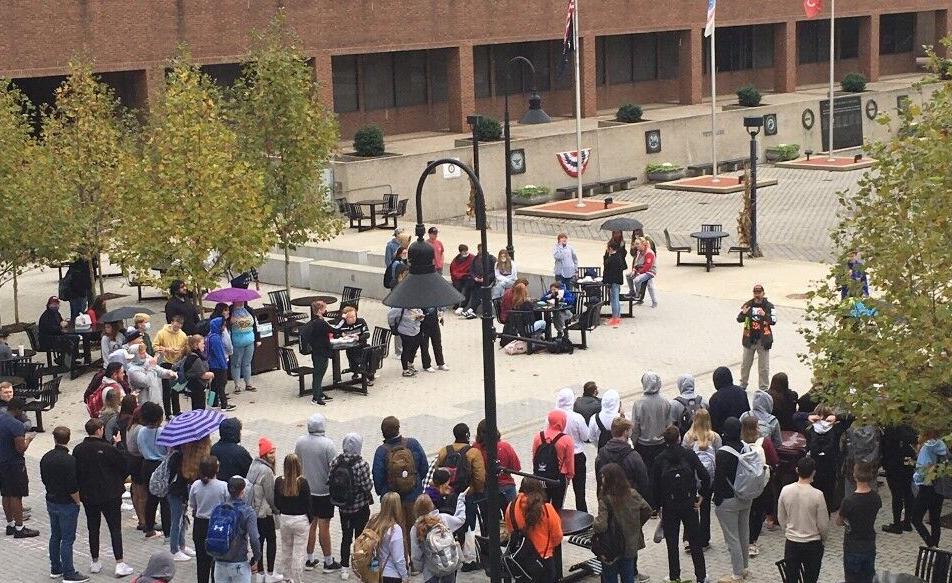 The lunchtime crowd gathers in protest around the men speaking the controversial messages. 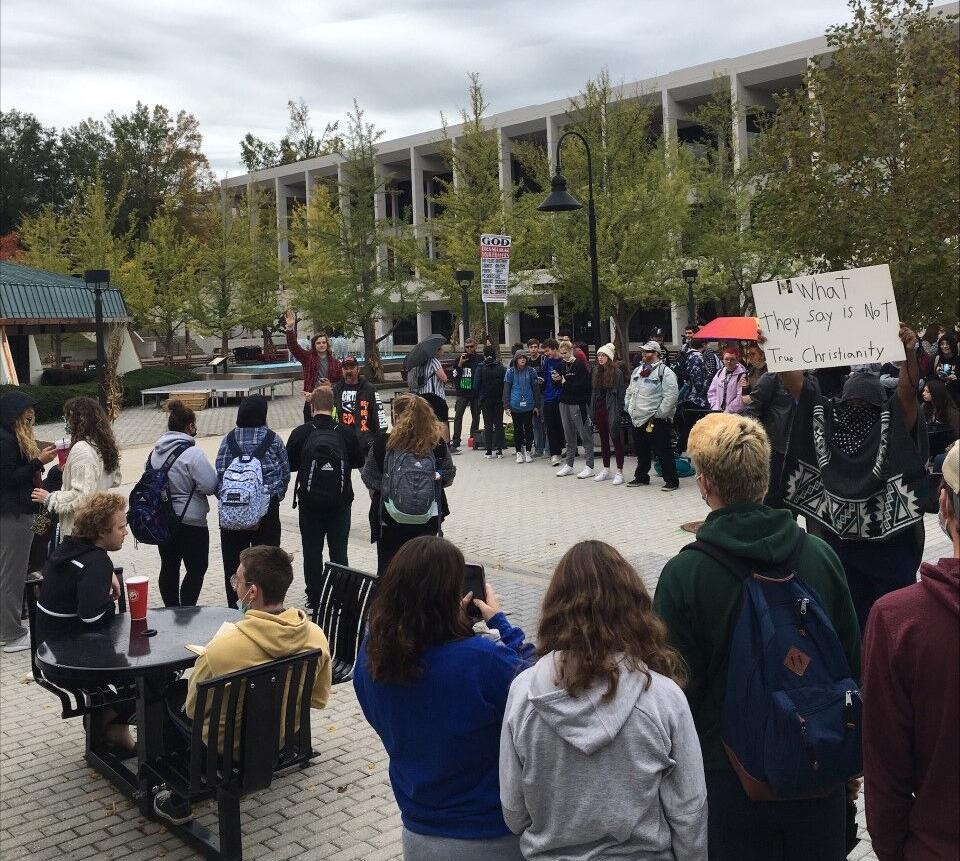 The crowd around the speaker includes people of varied backgrounds and faiths, including one with a sign that reads "God is Love" on one side and "What they say is not Christianity" on the other.

The lunchtime crowd gathers in protest around the men speaking the controversial messages.

The crowd around the speaker includes people of varied backgrounds and faiths, including one with a sign that reads "God is Love" on one side and "What they say is not Christianity" on the other.

“We came here today to rebuke the Eastern Kentucky University for their sin,” said one of the men screaming the message that brought a diverse crowd together in Powell Plaza on Thursday, Oct. 28.

They posited that homosexuals and drunkards were going to hell, God’s love was conditional, and more. They came with a tall sign that said God didn’t hear the prayers of baby killers, pot smokers, liars, socialists, and other labels.

Initially when I happened upon the scene I was confused about what brought such a crowd. However, when I listened to the message. My heart broke.

I am a Christian, and their message was anything but God’s love. I felt compelled to talk with others in the crowd. Most agreed the message he was preaching was full of hate, whether they were Christian or not. It settled my heart when many said they knew this was not a message that most Christians follow.

“This is not what true Christianity is. God is Love.” read a sign from a peaceful orthodox Christian protestor. They shared that they converted to the faith in their own free will due to a message of love shared with them, not because someone told them they were going to hell.

“The faith is to love people, to die for someone is the faith, but to spread hate is not the faith. God is love. Christ is risen, indeed he is risen!” the orthodox Christian said as tears appeared in their eyes. I could feel the passion he had for what he was saying.

Others united from the LGBTQ+ community after the man with the angry message was telling the crowd homosexuality was a sin and God didn’t hear their prayers. Many of them chanted “It’s okay to be gay” and “love is love.” One member of this community told the man screaming the message, “God is Love and Love is Love, so what you are saying is untrue.”

A Celtic pagan witch was also in the crowd.

“I would rather make a positive difference for the people that are here and combat all the hate that is going on.”

She was cleansing hate off all the people with burning cedar.

“This man was being extremely homophobic, misogynist, sexist, racist everything you can imagine. I am not Christian, but I have family members that are. They don’t act like this.”

Sarah Morris, an undeclared freshman, tried to say something back to the man, and he replied with a “no, no, no I don’t talk to loudmouth women.”

The crowd continued to get larger.

One of those verses stated, “If someone says, “I love God,” and hates his brother, he is a liar;” Once she quoted this verse and declared him a liar, the entire crowd followed her lead.

“I don’t experience the love of Jesus through this man. Even when God corrects us, he does it in love,” Kelley said.

“I think people should have conversations about faith, not yell at them.”

He mentioned the sign saying God doesn’t hear the prayers of socialist. “It’s funny to me, I don’t understand why they have that. That is not in the Bible.”

As we discussed our thoughts on the protest in front of us, he asked to pray for me. I gladly accepted.

As I talked with the diverse crowd, my heart felt more peace. Something beautiful had happened there that day and I captured all of it.

I feel honored to share this beautiful moment with the world.

A story that could have focused on the controversial message these men shared with others, turned out to be a beautiful example of how our diverse, often divided world can be united.

Christians, a pagan witch, the LGBTQ+ community, non-Christians and more united to show the world that the message these two men were spreading was not welcome at Eastern Kentucky University.