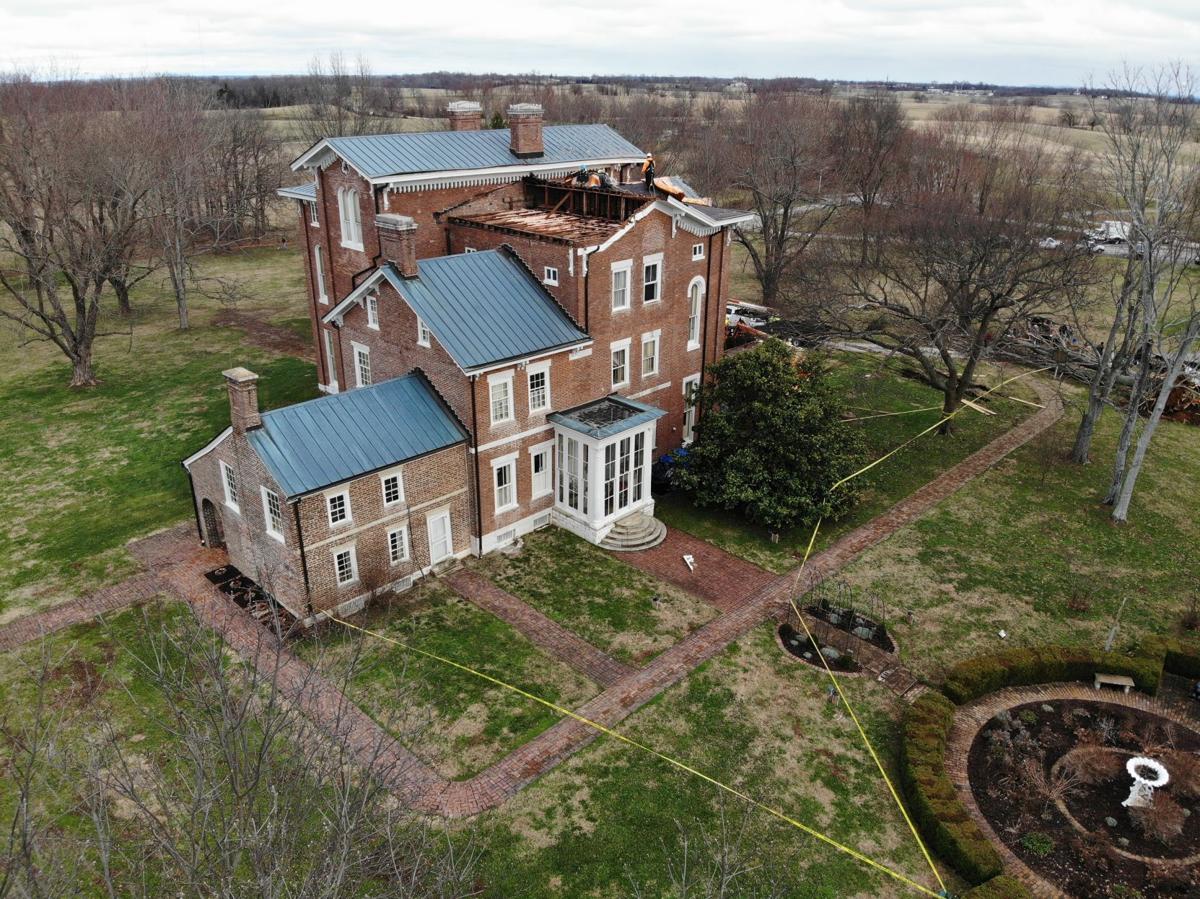 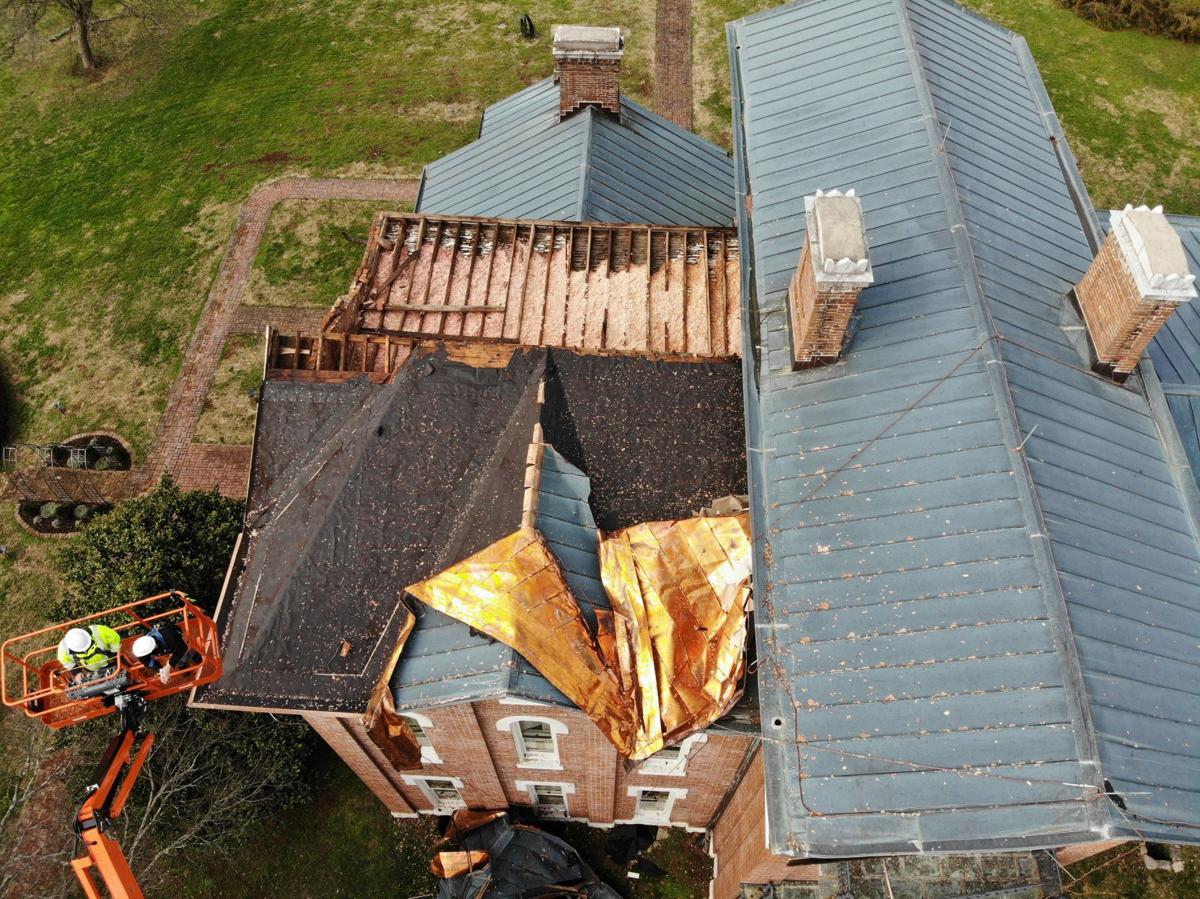 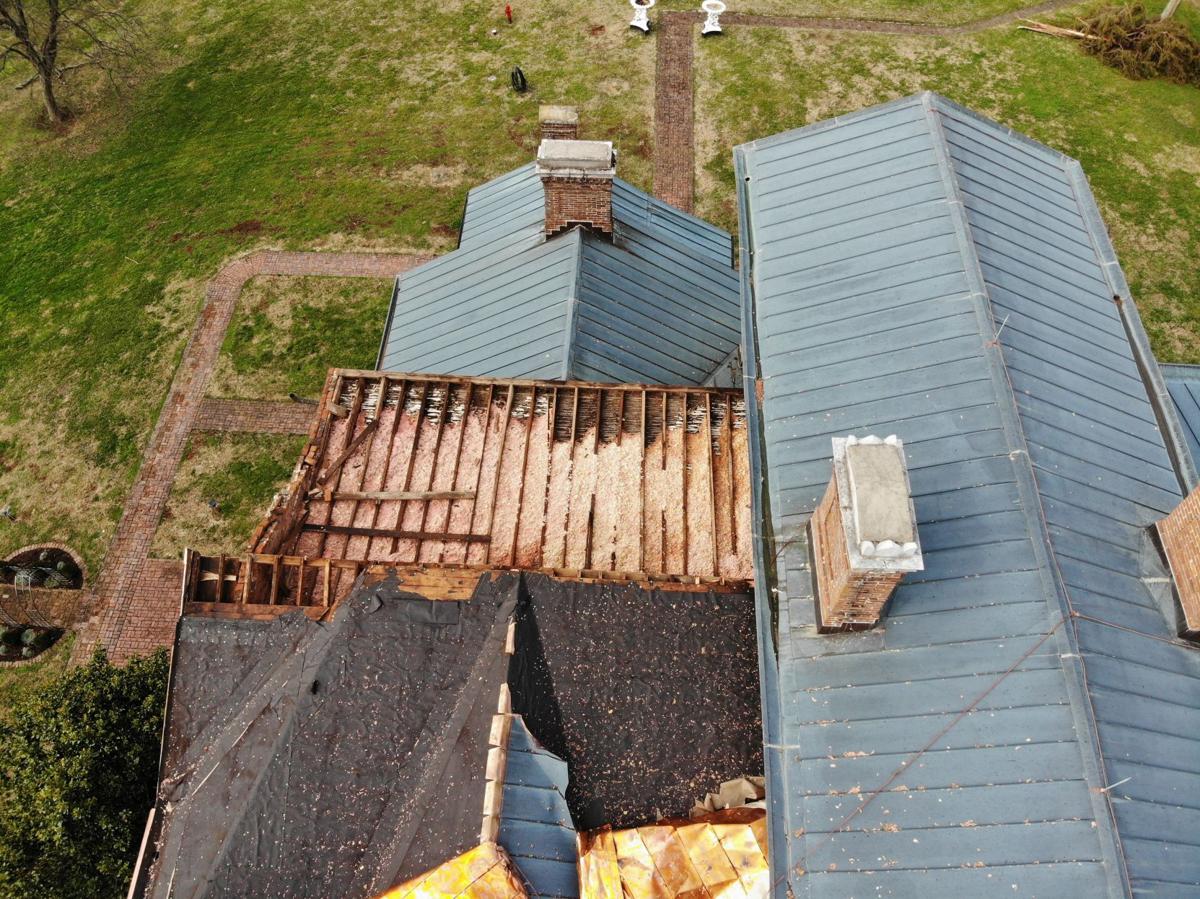 In addition, the property surrounding White Hall also gave way to the strong winds. Numerous trees were uprooted, and cleaning crews are working to clear debris from roads and the grounds.

Team members from Eastern Kentucky University were able to quickly move at-risk antiques out of harm’s way and into a safe environment further inside the building. One antique is currently being assessed by the university to find out if it experienced any type of damage.

The response crew was made up of multiple teams from multiple departments, including facilities management, conferencing and events and members of public safety.

Bryan Makinen, executive director of public safety and risk management, said EKU was first made aware of the damage to White Hall when the caretaker of the building and phoned it in.

“Through the normal chain of command at the university, phone calls were made and resources started being shipped to the White Hall property,” Makinen said. “Our facilities management team as our conferencing and events team immediately sent team members up there to go in and address the issue and mitigate what they knew to be the problem at the time until the weather could subside and they could get in there and determine the total extent of damages.”

Regarding which portion of the roof was damaged, Makinen said, “It was a lower section of roof. It was on the third story, and the way the roof is constructed, we have three lower sections and then a peak section. One of those intermediate sections, the wind picked it up and actually took part of the roof off of that one section. So not the entire roof was impacted, just that one section of the structure.”

According to Makinen, the brick underneath the portion of roof that was ripped up by the strong winds did experience damage, and the falling rain saturated some of the plaster in the ceiling of the third floor of White Hall.

“The water eventually got to a saturation point where it impacted the plaster and caused damage,” Makinen said. “Other damage was caused to other plaster materials near that section of the house from the force by which the roof was impacted.”

Several roofing contractors were brought out the day after to assess the damage and offer immediate temporary solutions.

“Those contractors were able to get a better impression of what exactly the damage was, perform mitigation efforts, so over the course of a couple of days installed a temporary roof over there so that future weather conditions would not negatively impact the inside of the structure any further damage,” said Makinen.

Makinen confirmed that the temporary protective roofing was successful in preventing more damage through the snow and rain since it was put in place.

A permanent solution, however, is a more complex issue, since White Hall is a state historical site and the repairs should be made to respect the era the building was constructed.

EKU must, as Makinen said, “put it back in like form that it was before the damage had occurred.”

This is the first incident of weather damage EKU has dealt with in respect to White Hall, as EKU has managed the property for less than a year. However, Makinen had nothing but praise for the members of the EKU community involved in the rapid response to protect White Hall’s historic nature and preserve its antiques.

“In times like these, I’m blessed by the fact that I get to see all these teams of folks coming together and working together to make sure there’s a positive outcome and this just showcases their talents and abilities… it’s just cohesiveness in how everybody just comes together, and I’ll say Colonels up; we Colonel up, and they do what needs to be done to get the job done safely, efficiently, for the best possible outcome.”

Jill Price, assistant vice president for outreach and engagement spoke her thanks to the caretaker of White Hall in an interview with LEX18.

“We’re very thankful for him,” said Price. “Being able to literally know immediately after the trees hit the ground we know that we had damage and that we needed to get people out here very quickly."

White Hall is currently closed for the season, with no events planned until April.