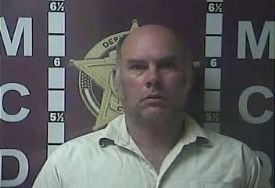 Glenn Jackson, 39, was arrested on Friday, April 24 for murder-domestic violence and tampering with physical evidence in the disappearance of his wife, Ella Jackson. 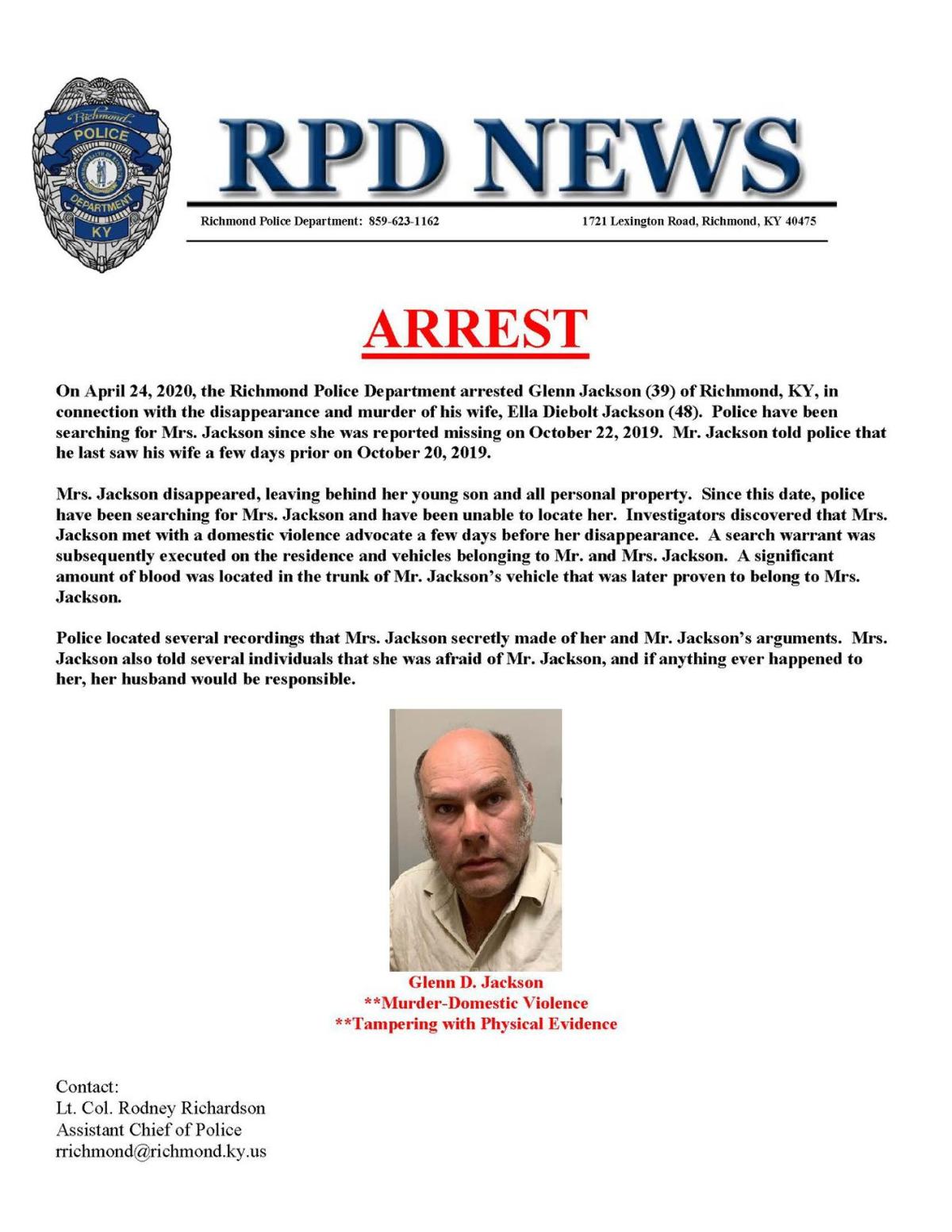 The Richmond Police Department released this press release on Friday about the arrest of former EKU professor Glenn Jackson. 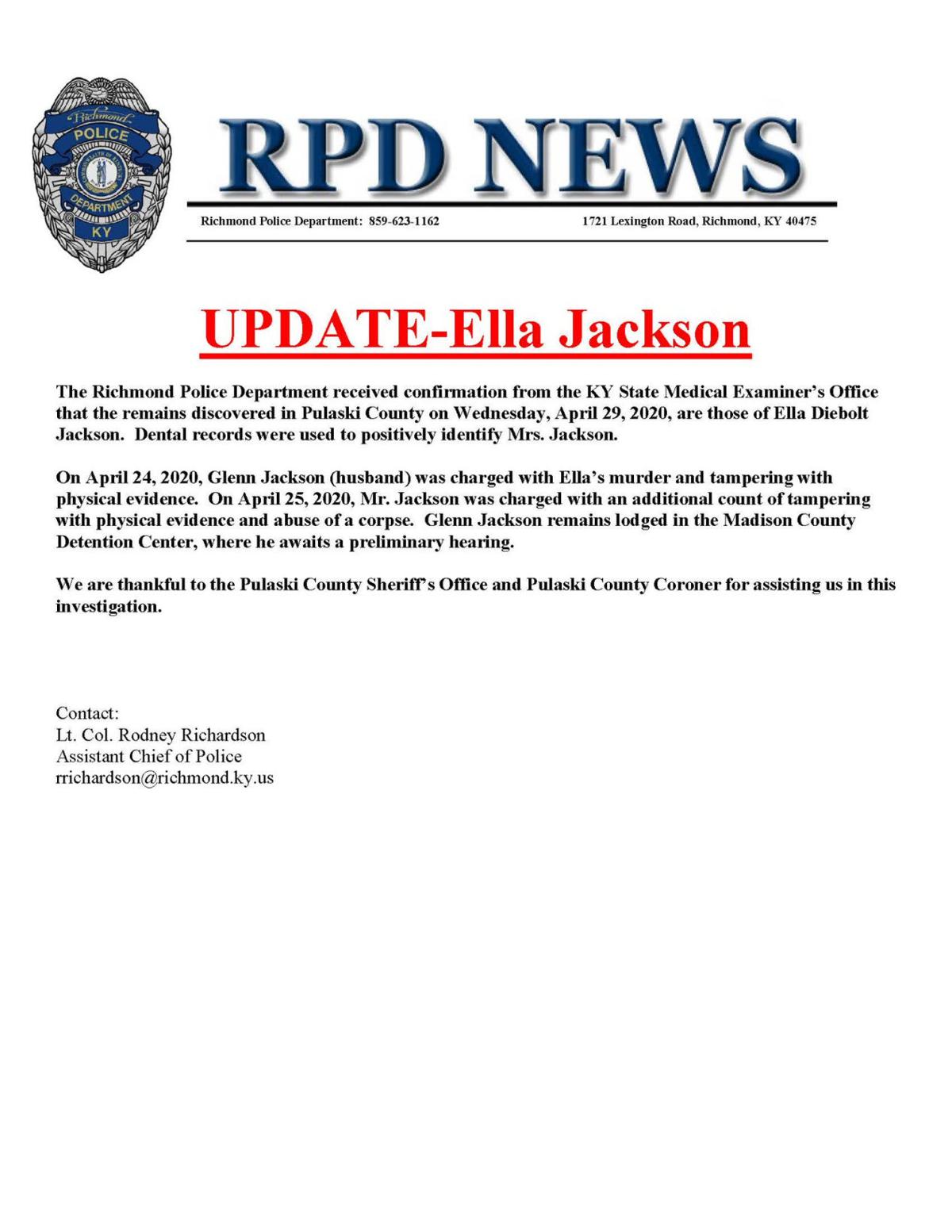 The Richmond Police Department released this statement on Tuesday, May 5 to announce that they have found the remains of Ella Jackson in Pulaski County.

Glenn Jackson, 39, was arrested on Friday, April 24 for murder-domestic violence and tampering with physical evidence in the disappearance of his wife, Ella Jackson.

The Richmond Police Department released this press release on Friday about the arrest of former EKU professor Glenn Jackson.

The Richmond Police Department released this statement on Tuesday, May 5 to announce that they have found the remains of Ella Jackson in Pulaski County.

The remains of Ella Jackson were discovered in Pulaski County on Wednesday, April 29 according to the Richmond Police Department.

On April 29, Richmond Police and the Pulaski County Sheriff’s Office served a search warrant at the Jackson's property in Wayne County after officers arrested Glenn Jackson in Richmond for the murder of his missing wife.

According to the Richmond Register, a night earlier, several residents of Pulaski County called and reported finding skeletal remains in a wooded area off South U.S. 27, about 3 miles from the McCreary County line.

Glenn Jackson is scheduled to appear in court again on May 6 for a preliminary hearing.

He is currently being housed in the Madison County Detention Center after pleading not guilty to charges of murder, tampering with evidence and abuse of a corpse via video arraignment on April 27, according to the Richmond Register.

Glenn Jackson, “attempted to conceal and destroy potential evidence, believing that a criminal proceeding may take place, with intent to impair it’s availability,” according to the Richmond Police Department arrest citation.

The arrest citation said that Ella Jackson was last seen by her husband at their residence on Oct. 20, 2019.

“Ella left behind all of her personal belongings, as well as her 5-year-old son, making a deliberate, unannounced absence implausible,” according to the arrest citation.

A search was conducted on the Jackson residence according to Richmond Police and according to the arrest citation, “Investigators detected and located a substantial amount of Ella’s blood/DNA in the trunk of Glenn Jackson’s vehicle, which had been thoroughly cleaned.”

According to a Facebook post by Ella Jackson’s ex-husband, Jason Hans, on Friday, April 24, he states that he has guardianship of her now 6-year-old child. Hans is a professor at the University of Kentucky.

In the post, Hans described how they met back in 2003.

“Ella came into my life in 2003, the year after I had become widowed by murder. She presented herself as widowed too, but her story imprinted a different type of trauma than mine. Her consent for that marriage was given under duress in a different cultural context, her husband was abusive, and she eventually found an opportunity to flee to Ukraine (where she had close relatives) to escape his reign of terror,” Hans said.

“Even as the emotional scars of our respective and all-too-recent histories continued to haunt us, Ella and I quickly developed a deep appreciation and love for one another,” Hans said.

Even though they divorced, Hans and Ella Jackson were still close friends.

“After some years of struggling to figure it out together, we cried the day we agreed to divorce; not so much out of sadness that our marriage was ending, as out of an overwhelming sense of hope that doing so was our first step toward rediscovering the treasured and loving friendship we had once shared,” Hans said.

Hans expressed his love and appreciation for Ella Jackson.

“Ella has long been one among a few people who I cherish most in this life; one for whom I would literally give everything to support and my life to protect. Although legal documents indicate that our marriage ended more than a decade ago, our love and appreciation for one another never wavered and our hearts have been connected forevermore,” he said.

Hans described the moments before Ella’s disappearance when she reached out to a divorce lawyer to get out of her marriage with Glenn Jackson.

“After years stuck in a cycle of violence, Ella had recently begun working in earnest with a lawyer on an exit plan. She met with her lawyer three days prior to her disappearance,” Hans said.

The arrest citation states that, “Evidence showed Ella was in an abusive relationship with Glenn Jackson.” The citation goes on to say that Ella Jackson wrote in her diary that she was “terrified” of her husband and that she told witnesses that if anything ever happened to her that looks like an accident or suicide, not to believe it; her husband was responsible.

According to the arrest citation, “It is a reasonable inference that Ella is no longer alive, that she met her death through criminal means at her residence on 10/20/19.”

As of publication, Glenn Jackson is still being housed at the Madison County Detention Center.

At his arraignment on Monday, a judge refused to lower his $250,000 cash bond, as requested by his attorney.

According to the Madison County Detention Center, an abuse of corpse charge is pending.

Glenn Jackson's next scheduled court appearance is set for May 6.

Richmond police arrested former Eastern Kentucky University professor Glenn Jackson, 39, and charged him with murder-domestic violence and tampering with physical evidence in the disappearance of his wife, Ella Jackson, 48, Richmond police said in a press release on Friday, April 24.

Ella Jackson was reported missing on Oct. 22, 2019. Glenn Jackson told police that he last saw his wife a few days prior on Oct. 20, 2019. According to the Richmond police, Ella Jackson disappeared, leaving behind her young son and all personal property. Since this date, police have been searching for Ella Jackson and have been unable to locate her.

Glenn Jackson formerly worked as an honors professor at EKU, where he has taught English and honors rhetoric. According to the Lexington Herald-Leader, a university spokeswoman said that Glenn Jackson has not been employed there since February.

Richmond police said in a press release that a search warrant was executed on their residence and vehicles belonging to Glenn and Ella Jackson.

“A significant amount of blood was located in the trunk of Mr. Jackson’s vehicle that was later proven to belong to Mrs. Jackson,” the Richmond police said in the press release.

According to the Richmond police press release, “Police located several recordings that Mrs. Jackson secretly made of her and Mr. Jackson’s arguments. Mrs. Jackson also told several individuals that she was afraid of Mr. Jackson, and if anything ever happened to her, her husband would be responsible.”

As of publication, no bond has been set. Glenn Jackson is currently being housed in the Madison County Detention Center.