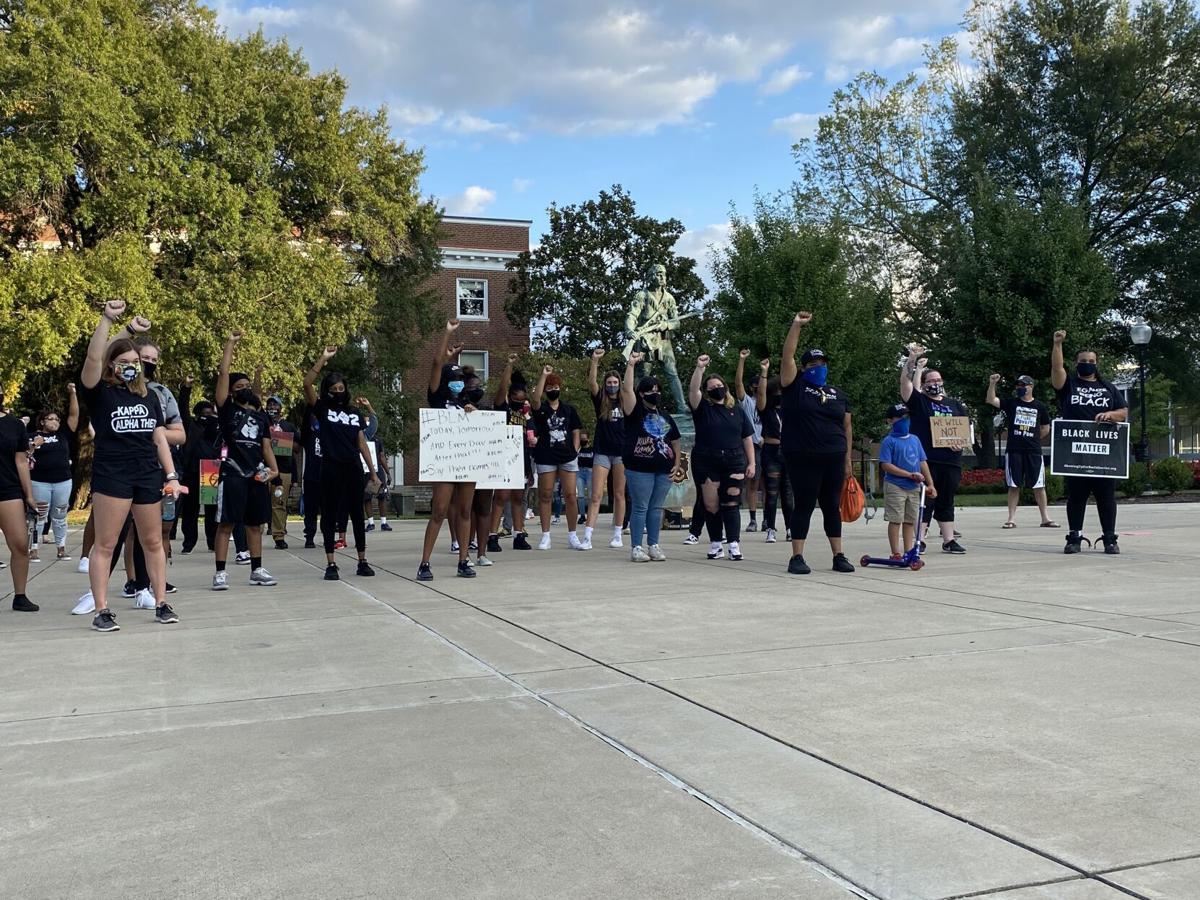 Supporters gather in front of the Daniel Boone statue on the campus of Eastern Kentucky University on Sunday, Sept. 27. 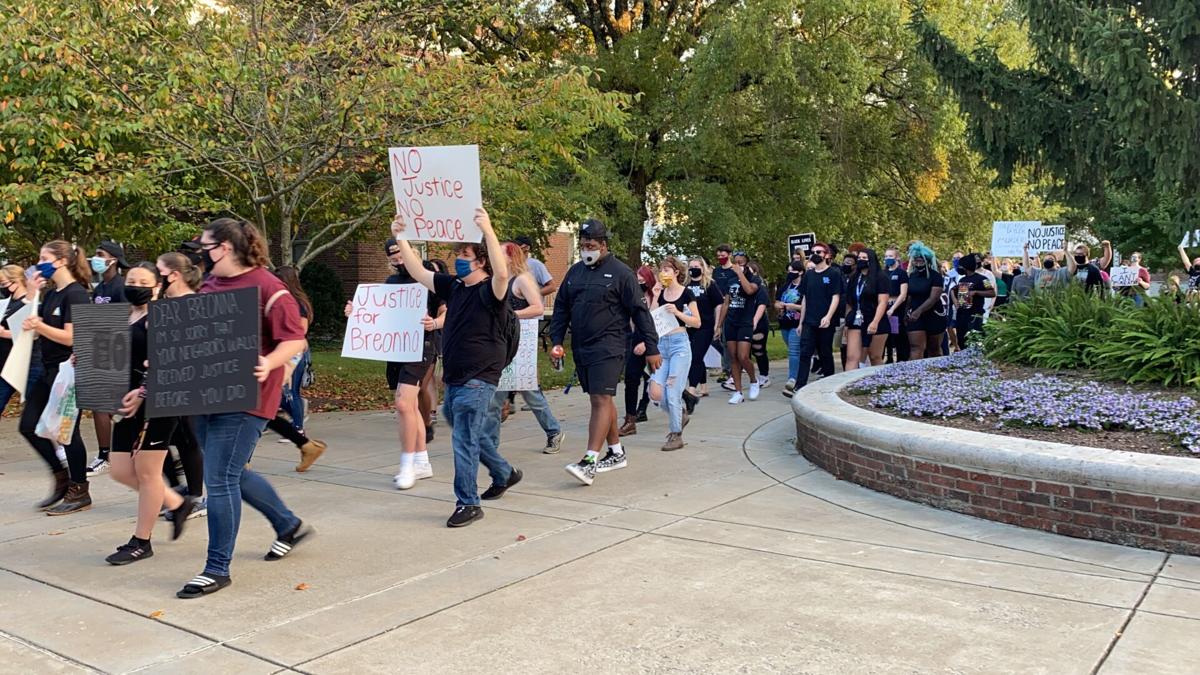 Supporters march by Burnam Hall during the Black Lives Matter demonstration at EKU on Sunday. 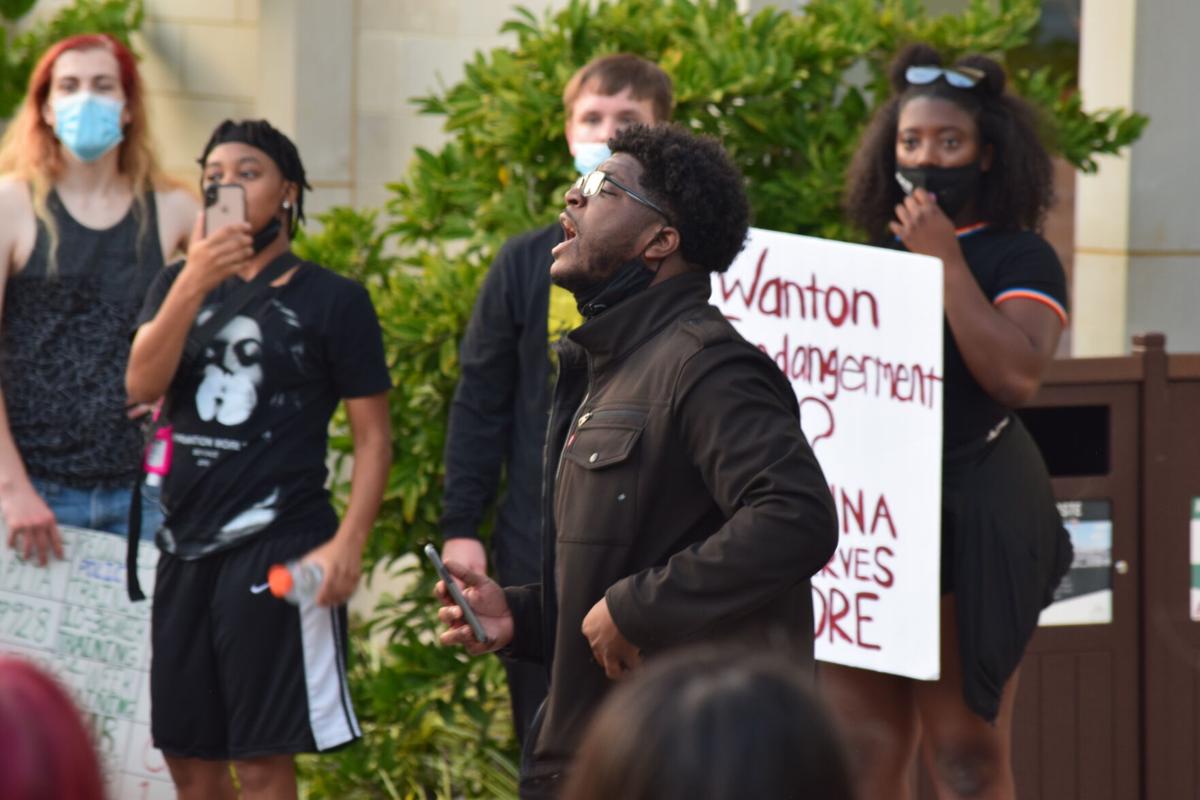 Kor’ee Jackson addresses the crowd during the march on Sunday. Jackson urged the supporters to vote in the upcoming election, strive to succeed in classes and to speak up about injustices.

Supporters gather in front of the Daniel Boone statue on the campus of Eastern Kentucky University on Sunday, Sept. 27.

Supporters march by Burnam Hall during the Black Lives Matter demonstration at EKU on Sunday.

Kor’ee Jackson addresses the crowd during the march on Sunday. Jackson urged the supporters to vote in the upcoming election, strive to succeed in classes and to speak up about injustices.

“Say her name” and “No justice, no peace” could be heard around Eastern Kentucky University’s campus on Sunday as supporters marched for justice for Breonna Taylor and other Black Americans who have been killed by police.

The EKU community witnessed around 100 supporters march around the campus with signs reading “Breonna Taylor” and “Black Lives Matter.”

Kor’ee Jackson, 23, senior music industry and recording arts violinist major from Louisville said, “Change starts with you … We are in college, we are educated, we are already breaking stereotypes against us.”

“If we don’t stand up for each other… if we're not one cohesive voice, then our voices are scattered. And a chain is only as strong as its weakest link,” Mekonnen said.

In part, the statement read, “The Eastern Kentucky University Student Government Association works to serve the Student Body and accommodate all students on all levels of needs, and is committed to self-examination, advocacy, solidarity, and uplifting those marginalized.”

The statement continued, “Therefore, in service of the Student Body and in service of creating a more inclusive and equitable community, we call for and commit to real, tangible, and sustainable change. There is a long road ahead to achieve equity and justice for all.”

“Our goal is to make a platform for students to express their concerns about the verdict of Breonna Taylor’ case,” McKenzie said.

Before the march, Jackson addressed his experiences with the police.

“I don’t know about you all, but I’m tired. Every night I have a nightmare about my own people. I grew up in a neighborhood where police would shake me down quicker than the speed of light.”

Jackson urged the crowd to stand up and fight for justice by making their voices be heard.

“How are we going to make a change?It starts here,” Jackson said.

Speakers at the march stressed the importance of voting in the upcoming election.

“Turn that rage into registration,” said Shaela Worsley, Madison Central High School graduate and Morehead State University student. “Bring your voice to that poll. There shouldn't be any reason why each and every one of you should not be at that voting poll.”

Junior Justin Holder-Jones from Louisville said that having poll workers even during a pandemic is necessary so people can vote.

Jackson and the other supporters want EKU students to understand that they have power to make change.

“You’re getting stronger every step that you take,” Jackson said. “You are powerful. Change starts now.”