Eastern Kentucky University students participate in a class prior to the COVID-19 pandemic. In the 2019-20 academic year, 84.7% of students at EKU were White. 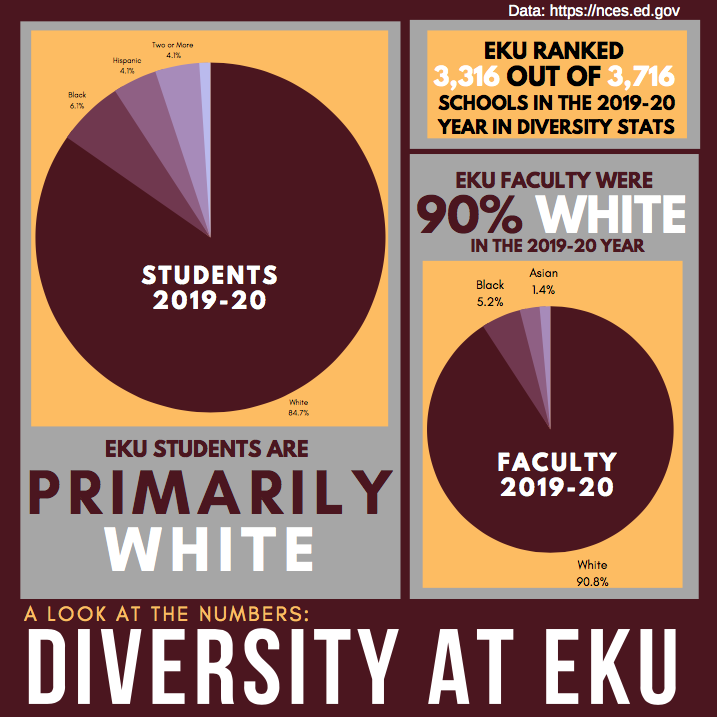 Eastern Kentucky University students participate in a class prior to the COVID-19 pandemic. In the 2019-20 academic year, 84.7% of students at EKU were White.

Despite a recent uptick in underrepresented minority population enrollment, Eastern Kentucky University continues to lack a large amount of diversity among faculty, students and staff even as neighboring public universities have grown in their minority populations.

EKU remains a predominantly White school. In the 2019-20 academic year, EKU’s student population was 85% White, while Black students made up only 5.9% of the population. Multi-ethnic populations make up an even smaller percentage at 3.1%. EKU’s faculty reflects these trends as well, with 90% of educators being White. Black, multi-ethnic, and Asian faculty makeup 5.2%, 2.6% and 1%, respectively, of EKU’s professional employees.

Overall, EKU ranked 3,136 out of 3,790 schools in its overall diversity rating, as reported by the National Center for Education Statistics. Even worse, EKU’s racial-ethnic score is 17.26 out of 100.

In order to draw more diverse students in, faculty must be diverse as well, another area in which the university is lacking diversity.

Roger Cleveland, EKU’s director of Faculty Development & Diversity Initiatives, and Socorro Zaragoza, professor and senior Diversity, Equity, and Inclusion advisor to the provost, agree that EKU is in competition with larger schools in the state for diverse faculty. According to Cleveland and Zaragoza, the University of Kentucky and the University of Louisville can provide faculty with better pay, location and more resources.

However, Zaragoza stated that this is no excuse for a lack of diversity among EKU’s faculty.

“It shouldn’t be an excuse—if we want a particular person, we should go for it—but we haven’t,” said Zaragoza.

In comparison to EKU, UK is currently ranked in the top 10% of diverse schools within the state of Kentucky. Despite this ranking, the university still has a primarily White population of 73.6% and a similar rate of Black students to EKU with a population of 6.6%, while Hispanic and multi-ethnic students make up a combined 8.4%. Asian students make up 3.2% of the population.

According to Zaragoza, as faculty at EKU lacks diversity, EKU will continue to lack in the number of diverse students. Zaragoza stated that students need to see themselves in their educators and need to have representation—they need to sense a community.

Zaragoza said, “The student population is changing—It is really important that these students see somebody that looks like them.”

Cleveland agreed, stating that retention and recruitment of diverse faculty goes hand-in-hand with doing the same for diverse students. Students and staff both need a community of their peers and support.

“I think that it is very important to have retention initiatives in place for faculty of color and that means supporting them in the tenure process, offering them competitive benefits and salaries, and just getting the overall support for them professionally,” said Zaragoza.

Zaragoza said the university has room for tremendous growth in these areas.

According to Zaragoza, committees under the President’s Inclusive Excellence Advisory Board focus on issues concerning diversity and inclusion at EKU. These include diversification of faculty, staff, and curriculum; campus climate; and retention and recruitment.

Zaragoza went on to further state the other advancements made by the university since her arrival to the university 14 years ago. According to Zaragoza, EKU has instituted a number of programs, including CIEGE, the Africana Center, and the Bobby Verdugo and Yoli Rios Bilingual Peer Mentoring Center. The creation of this center specifically was to create a space to serve the Latino community at EKU.

Zaragoza said, “It was important to have a space for the Latino students to feel like they belonged.”

Zaragoza also expressed that President David McFaddin has shown a dedication to improving diversity at the university. Zaragoza stated that with the hiring of Dr. Dannie Moore to the position of vice president for Student Life and chief Diversity, Equity, and Inclusion officer has also reflected these steps to improve diversity.

“President McFaddin has shown the commitment by opening the hiring of Dr. Moore, by my position as a faculty fellow - he has that commitment and has been very supportive of bringing those resources in terms of scholarships and creating other opportunities.”, said Zaragoza.

According to Zaragoza, EKU is a place where many students first see a diverse environment.

CORRECTION: The initial story had the incorrect title for Dr. Socorro Zaragoza. The article has also been updated to reflect that change and to highlight their ongoing diversity initiatives.