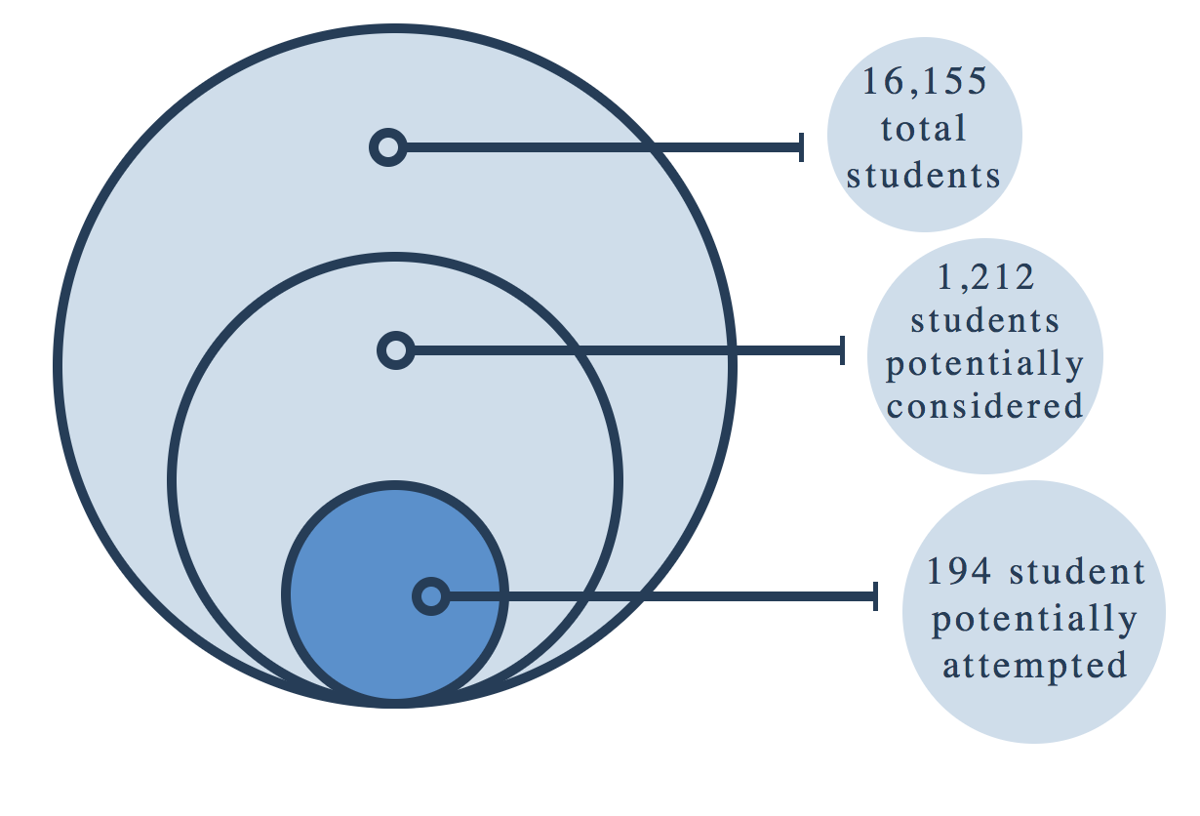 According to the National Center for Education Statistics, the percentages above show the potentially affected population of Eastern Kentucky University’s 2016-2017 academic year undergraduate class. The estimates are based off the highest percentages. 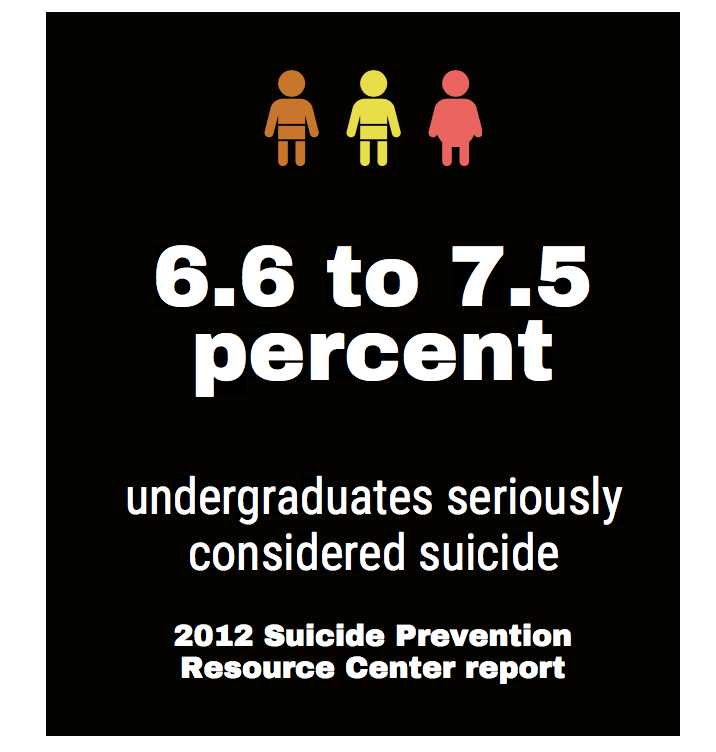 According to a 2012 Suicide Prevention Resource Center report, 6.6 to 7.5 percent of undergraduates seriously contemplate suicide. 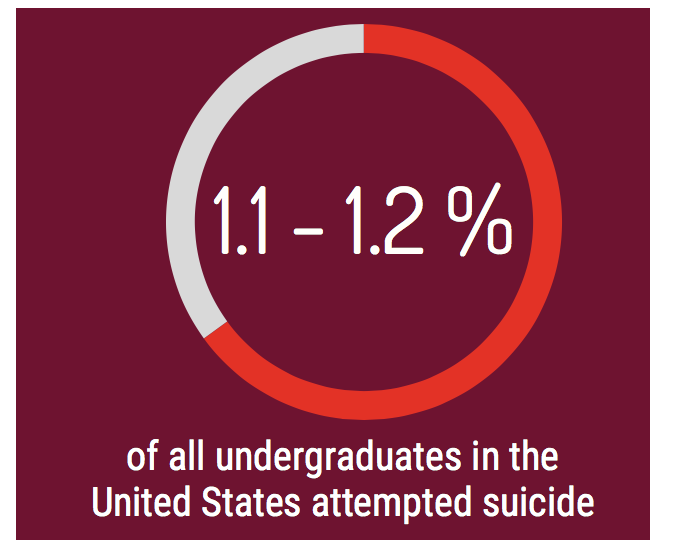 Suicide is a prevalent issue among college undergraduate students.

According to the National Center for Education Statistics, the percentages above show the potentially affected population of Eastern Kentucky University’s 2016-2017 academic year undergraduate class. The estimates are based off the highest percentages.

According to a 2012 Suicide Prevention Resource Center report, 6.6 to 7.5 percent of undergraduates seriously contemplate suicide.

Suicide is a prevalent issue among college undergraduate students.

47,173. That is the number of Americans who died by suicide in 2017 according to the Center for Disease Control and the National Center for Injury Prevention and Control.

In regards to college and university students nationwide, the Suicide Prevention Resource Center put out a report for the year 2012 in which 6.6 percent to 7.5 percent of undergraduates seriously considered suicide. Approximately 1.1 to 1.2 percent of all undergraduates in the United States attempted suicide. If the highest percentages are applied to Eastern Kentucky University, it would yeild approximately 1,212 students who have considered taking their own lives, and as many as 194 students attempting suicide. That number is likely larger.

Melinda Moore, assistant professor in the EKU psychology department trains advanced doctoral students servicing the campus Psychology Clinic in Collaborative Assessment and Management of Suicidality (CAMS), a focused treatment for individuals struggling with suicidal thoughts and tendencies. She also resides on the board of the American Association of Suicidology and is a co-lead of the Faith Communities task force for the National Action Alliance for Suicide Prevention. Moore is no stranger to the devastating effects of suicide as her husband died by suicide after eight months of marriage. She said suicide can be considered a form of dealing with distressing situations.

“It’s kind of like drinking and drugging; people will numb themselves out,” Moore said. “That’s how I would characterize it… a maladaptive form of coping.”

Moore said this suicidal coping does not only manifest itself in the active harming of oneself but also in a much more passive way as well.

“If you have a feeling that you just really would prefer not to wake up in the morning… like it would be okay if you got hit by a bus, people often times will have those sorts of feelings,” she said. “They’re not actively suicidal, they’re not thinking about how I can kill myself, but they’re thinking ‘it would be okay if I just didn’t wake up.’”

Moore said the lack of resources in Kentucky, easy access to firearms and stigma against asking for help create an easy, potentially lethal environment for those who are struggling with suicide.

Regarding college students, Kevin Stanley, associate director of the EKU Counseling Center, wrote in an email to The Eastern Progress that “two of the biggest factors are major losses and feelings of hopelessness.”

“Another factor that can contribute to problems with mental and emotional wellbeing is stress, and college can be a time of intense stress in many forms, such as pressure to succeed and financial strain,” said Stanley.

To combat the rising trend of suicide, there has been a disposal of the older manner of treatment which focused on each of the symptoms individually.

“Now when somebody is suicidal, and they come to a clinician who’s been trained, we’re really looking at how to treat that suicide,” Moore said.

Moore compared it to treating people in the midst of other medical emergencies.

“You’re assessing for what’s driving their suicidology,” Moore said. “It helps the clinician and the patient together figure out what’s driving the suicidal thinking and behavior, and then they collaboratively develop a treatment plan to address those drivers.”

Another method that has been developed is Question, Persuade and Refer (QPR). It’s a three-step process anyone can apply when treating an individual struggling with suicide.

Katie Crabtree, a senior at EKU who helps students in the Student Success Center, received QPR training to prepare her for aiding students that attend the center who are in crisis or duress. She said that QPR provides a method for identifying signs that an individual might be struggling with suicide. Examples of these signs include isolation and a general disinterest in life.

When asked what the course of action would be if a person did exhibit these behaviors, Crabtree said that she would directly ask the individual if they were considering suicide. Moore agreed.

“You won’t know unless you ask,” Moore said. “And it’s really important that people get comfortable. If they’re concerned or if they see something that’s just kind of off with a friend, saying ‘are you having thoughts of suicide,’ and doing it in a non-judgmental, empathic way.”

What Services are Offered?

The National Suicide Prevention Lifeline, 1-800-273-8255, is a government-funded support program that offers free emotional support to those in crisis on a 24/7 basis. Callers will be connected to local receiving centers to get help. On EKU’s campus, the Student Success Center, Counseling Center, and the Psychology Clinic refer or treat those struggling with suicide or have been impacted by suicide.

“If a student had a mental health episode going on, we would walk them directly to the counseling center our self,” Crabtree said.

She said that if someone is suffering but is not in immediate danger, those working in the center will get the individual’s contact information so that the director of the center, Lara Vance, can reach out and connect with the student personally.

The EKU Counseling Center offers many services, including individual, general, couples and group therapy, all of which are exclusively available and free for enrolled EKU students. For crisis emergencies, Stanley’s email stated, “If a student is in crisis, they can walk in and meet with a counselor any time.” In addition, the counseling center also offers QPR training for students, faculty and staff on campus.

The Psychology Clinic at EKU offers the most focused treatment for suicidal individuals as well as those closely impacted by suicide. Not only available to EKU students but also to the larger Madison County community, the clinic serves individuals on an outpatient basis in addition to supplying training to both professionals and students.

Specifically to treat those battling suicidal thoughts and tendencies, the clinic utilizes the CAMS treatment, which Moore said is one of three empirically proven methods of treating suicide. In fact, the EKU Psychology Clinic frequently works alongside the EKU Counseling Center to better treat students. Inside the clinic, there is a specific program available, called the Psychology Trauma and Suicide Prevention Clinic, which not only provides treatment for those struggling with suicide, but also to those who have lost someone close by suicide, called bereavement therapy.

How can students help?

Students on EKU’s campus can take advantage of the QPR training provided by the EKU Counseling Center in order to be on the lookout for classmates and friends who exhibit the symptoms associated with suicide. Although discussing with someone their suicidal thoughts is intimidating, it is essential in preserving that individual’s life.

“It’s not that they want to die,” Moore said, “it’s that they don’t want to live in the pain that they’re in.”

The concept of seeking help not only applies to individuals experiencing suicidology, but also those who’ve lost someone close to suicide. Letting those know who are struggling that help is available is essential in keeping them alive, Moore said

“Tell your friend that you care about them deeply, you don’t want anything to happen to them, that there are resources in the community… they don’t have to live in that kind of pain,” she said.

Letting those know who are struggling that help is available is essential in keeping them alive, Moore said. The concept of seeking help not only applies to individuals experiencing suicidology, but also those who’ve lost someone close to suicide. Moore encouraged those who have been affected to seek out aid and participate in the bereavement therapies offered in the Psychology Clinic, since being impacted by suicide can lead that individual down the same path.

Partly cloudy skies during the morning hours will become overcast in the afternoon. High 76F. Winds light and variable.